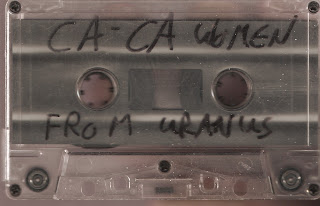 A little known (or cared about, probably) fact is that the RICE HARVESTER 7" was supposed to be a split 7" with THE CACA WOMEN FROM URANUS. Both bands recorded all their songs for the record on the same day in the same studio with all of the same instruments. A week later, when the final mixes were being done, a member of the CACA WOMEN called the studio, said the band was backing out of the record and these songs never saw the light of day.
THE CACA WOMEN FROM URANUS formed in a dirty punk house on Roland Road (or near there) in Huntsville, AL and played a bunch of shows around town. I seem to remember one show at an ice cream shop where their drummer was working at the time. During her break, she came out from behind the counter, played the set with her work apron still on and then went back to work as soon as they were done. I think that happened. I could be wrong. It was 14 years ago. Unfortunately, they broke up just when they were getting good and "Don't Talk About It" shows the direction that they were going in with the pop hooks. I hope there are still some all-female teenage punk bands in Northern Alabama that are doing something similar to counteract the dudely aspects of that scene.
Download CACA!!