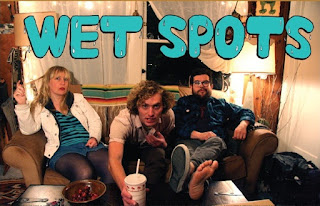 This one is intended as a companion piece to this post

Barker was starting to wind up WET SPOTS around the same time that our band together was winding down and it was maybe more his speed. While our band seemed to act more and more serious, WET SPOTS liked to joke the fuck around and write seriously catchy songs. Barker wrote the guitar riffs and sang while Oscar and Janelle rounded out the rhythm section on bass and drums respectively. The results are seven excellent songs that help you remember that Barker had an unfuckwithable ear for melody.
I remember when they were going to record these songs, I ran into Barker and he was excited because Darin from SUPERCHARGER was turning the knobs for them. I was excited too and we privately geeked the fuck out about it for a minute because we were both garage rock nerds at different points in our lives. I didn't even know the guy was still around, but the tape sounds fuckin' great, so he still knows what he's doing.
When WET SPOTS went to play a few shows in Hawaii, I got super jealous, because I've always wanted to play there. Upon their return, I asked Barker how it went and he played it a little too cool..."Ahhh, it was fine. We played a show or two. The people were pretty nice." I ran into Janelle later and she gushed about it. "It was fucking fun! We hung out in the ocean a ton. Barker jumped off of a cliff!" Then, she showed me a ton of photos and every one of them looked like the best time ever!
Download this stuff and play it loud. Enjoy Janelle's pounding drums, Oscar's smooth ass bass lines and a voice that should sound raspier knowing the amount of whiskey that has passed by those vocal cords. 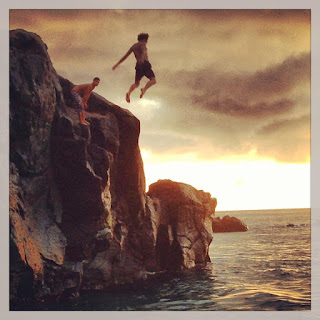 Barker in Hawaii. Photo by Janelle.
Posted by Harvester at 11:00 PM 1 comment: 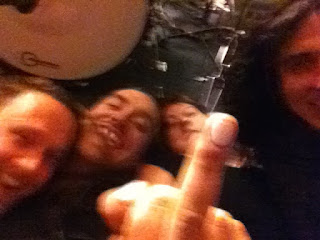 Breaking the Clocks, Burning the Bridges: A hagiography of that fucking Hesh Paul The Urgents, Demo Tape, Recorded December 23rd, 2013, at the OMC 4th Floor on Lean

Heartbreak rose with the sun on Friday. Paul Woods has died, but he left us with his music. Music was the thing Paul cared about most. He could have done almost anything with his life but chose music. Most people don’t know this about Paul because he was such a goof ball, but he was really smart. Paul had a degree in Philosophy from UC Santa Cruz. Sometimes when I was worried about something or other, I would go lay on his bed, tell him about it. He would pull a book off his shelf: Foucault lectures on Psychiatry, books about DMT effects on the brain. Those books helped me through more than a few hard times. In fact one time when I was very nervous about my second date with a super-hot Marxist, I asked Paul for a book to bring on the picnic that would make me look smart. He handed me Les Chants de Maldoror packaged with an encouraging speech. I walked away feeling confident. He could make you feel really good.

The Urgents was Argeniz on bass (Maquina Muerte), Ryan Texas on drums (Death Drive, Trenches), and Paul and I on guitar. Paul wrote all the songs before compiling the group. He even typed up the lyric sheets on his little typewriter, so I could sing along. We practiced together for a few months, played one show in front of a “Dump Yer Landlord” banner, and recorded these songs. This album was not destined to come out great, but when you listen to it you will notice that it is great. First, because it was all Paul, and this was his passion. Every piece of equipment was his, all the sound engineering and mastering was his doing, the riffs were his and the solos were also his. The Urgents was his ode to punk; a community that let him be him. The other reason it is great is because it is true. At the time of this album, Paul and I were co-defendants in a graffiti case deriving from a FTP march and were squatting at the infamous RCA/Hot Mess. The songs are all about our lived experiences, the love and heartbreak of those years. Watch The Smoke is about that moment where you go for it, hard, don’t look back even though you may lose it all, you pause to revel in the simple beauty of the smoke. The Urgents is about the real estate lawyer who evicted us from the RCA. His name was Bruce Reeves and one time in court Paul very calmly referred to him as Ruce Breeves without laughing. That kid was wearing a bolo tie and a ten gallon hat. The judge asked them to exchange emails and Mr. Breeves looked up at Paul and asked, “liveXfast at riseup.net: is that right?” His grinned a big grin to bear that gap of his missing front tooth (lost to a bite of crusty pizza) and replied, “Yes, that is right Your Honor.” It was glorious. Ruce Breeves had a stroke and shut down his office after handling that case. No doubt a product of being casual taunted by a long haired hesher in a cowboy hat. I Had a Future is about how Paul was going to be a Marine Biologist after high school and did a year of school for it, but dropped out because he just wanted to play music and hang out. “I had a future//man it was so bleak//had to run away.” He was really proud of this song because it captured how having a future just meant fucking people over. “Traded in my future//for a chance to live again.” Blurry Visions is about feeling alone: in your head and in an crowd.

Say what you will about Paul because he wasn’t a saint (“God never takes the angels early”). But he was a warm and loyal friend. I will miss his hugs, the way he held you really tight in his thick crusty vest was the ultimate comfort. Paul was unlike most people in one key respect: you would never hear him say he hated somebody. He avoided all out character denunciations and looked for the good bits in the messes of all of us. He laughed with you about himself and his flaws or you and your flaws, a big loud laugh. The last couple years have been really hard. A lot of people came together and then fell apart. Every time we lose a Basil, or a Barker, or a Paul or a Chris Chitty, or a Monique I hope we can use it as a moment to reflect on the ways we treat each other while still living. The living times go by really fast unless we have each other to break the clocks. The black flag will be flying at half mast for a while. Goodnight you fucking Hesher Paul. 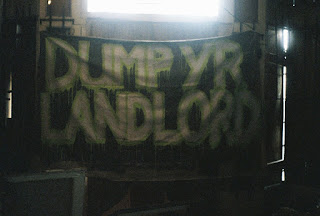 To contribute to his memorial fund, please click here.