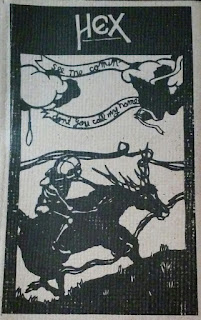 Today's post is brought to you by Erik Ruin, who previously contributed a top ten list to the blog a few years ago. I think this tape is incredible, but wanted a different perspective on it, so I asked Erik for his take. Many, many thanks to the members of HEX for sending over the digital files when my machinery was having issues.

Heavy music on non-traditional instruments has a seriously mixed track record. It can tend toward simple novelty- (think APOCALYPTICA or even worse) but it can also lay bare nuanced dynamics and complex compositional structures that are often obscured to those- like me- who have trouble looking beyond the standard genre tropes (wailing guitars,machismo, long hair, etc.). It’s into this latter camp I’d put viola/tuba/drums trio HEX, alongside luminaries like Portland’s DISEMBALLERINA and Providence’s BELLOWS.

According to violist Jackie Beckey- “Andie, Aaron and I were all hanging out around this time and interested in creating heavy music on nontraditional instruments. I'd been experimenting with this for awhile and was hoping to start a project with someone who shared this vision. Aaron--a fellow classically trained orchy dork punk on tuba--was the obvious choice for a bandmate. We were both interested in creating heavy music influenced by non-western music, such as African drumming. Aaron and I were also into geeking out about poly-rhythms, exploring tonality by amplifying acoustic instruments and using instruments with incredible amounts of sustain to play heavy music.”

The first and last songs of this tape begin with lengthy tuba drones rich in texture and atmosphere. From there it gets more rocking, with Jackie alternating between heavily reverbed pizzicato plucking (kind of a trademark of hers) and sawing riffs. At times, it reminds me of stoner rock transcendalists like SLEEP or even 70’s Swedes PARSON SOUND (a direction Jackie and Andie would take further with their project MYRRH) but it also breaks out into galloping sections that are not too dissimilar to their Minneapolis contemporaries COUNTY Z (ed. note: there is so much CZ on this blog and you should definitely seek it out) and ROTTEN LIVING. The cover sports paper-cut artwork by “Dragon-face” Dan Nelson, virtually de rigeurin the scene at the time (see also DOGS, THIEVES, DANGER BOY & THE ROAD VULTURES, etcetcetc….)

HEX was relatively short-lived, beginning and ending in 2007. As far as I know, this is their only recording. They did go on a two-month tour, which Jackie remembers as “the best tour I've ever been on. Luke Holden toured with us the entire way and performed at every show as the hilarious "Body McFartin" human fart machine opening act. Because we kind of didn't fit into any specific musical genre, we played a lot of weird shows--opened up for a D-beat band in Dallas, performed with the art-punk band TEENAGE WAISTBAND in Providence, and performing during an intermission for a psychedelic play in Kansas City.”

They so impressed my friend Dan Schleifer at their Providence show that he formed his own tuba-drone metal band, the aforementioned BELLOWS (who also ruled and are also sadly broken up)

All the members of HEX have gone on to do a bunch of stuff– Jackie formed the more melodic yet still driving BRUTE HEART and is now mainly focused on soundtrack work. Tuba player Aaron moved to Pittsburgh where he’s playing in two great bands- tuba with brassy LUNGS FACE FEET  and bass with heavy weirdos COME HOLY SPIRIT(alongside Gina Favano of the much-missed JOHN DENVER'S AIRPLANE). Andie went on to play drums in the brilliant MOTHER OF FIRE, then in a variety of scrappy punk bands and is a brilliant painter. 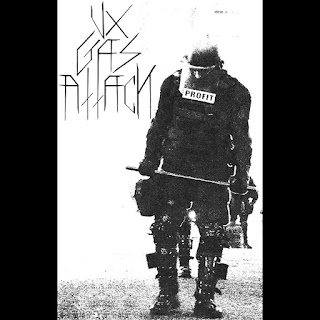 For the last week or two, I've been combing through stacks of tapes to digitize for the blog and coming up with stuff that I'm not particularly excited about. What I've noticed though is that almost every time I've been looking, this tape has actually been the one playing on the tape deck. In fact, it hasn't been more than one foot away from my stereo since their singer August placed it in my hands on a 2 AM 24th street a few months ago.
I previously saw August singing for WALLS a few years ago and I honestly thought he was singing about different kinds of knots. More recently, I saw him losing his shit as he co-fronted PIG HEART TRANSPLANT to a largely vacant room. VX GAS ATTACK is a different beast altogether. Throughout the ten songs on this tape, the band is unrelenting. No breakdowns. No "mosh parts". Plenty of nearly cheesy divebombs and guitar solos that cross the border of ridiculous (note: I'm 100% fully in support of this). August is completely unhinged in a way that actually sounds dangerous. You know how there's those people who say that if they didn't find music, they might've just killed people instead? That's what this sounds like to me. Plus, it sticks in my head.

I picture this band using BC Rich guitars exclusively.
Members of  PHT, WALLS, PLEASURE CROSS, LORDS OF LIGHT and more.
Posted by Harvester at 2:35 PM No comments: