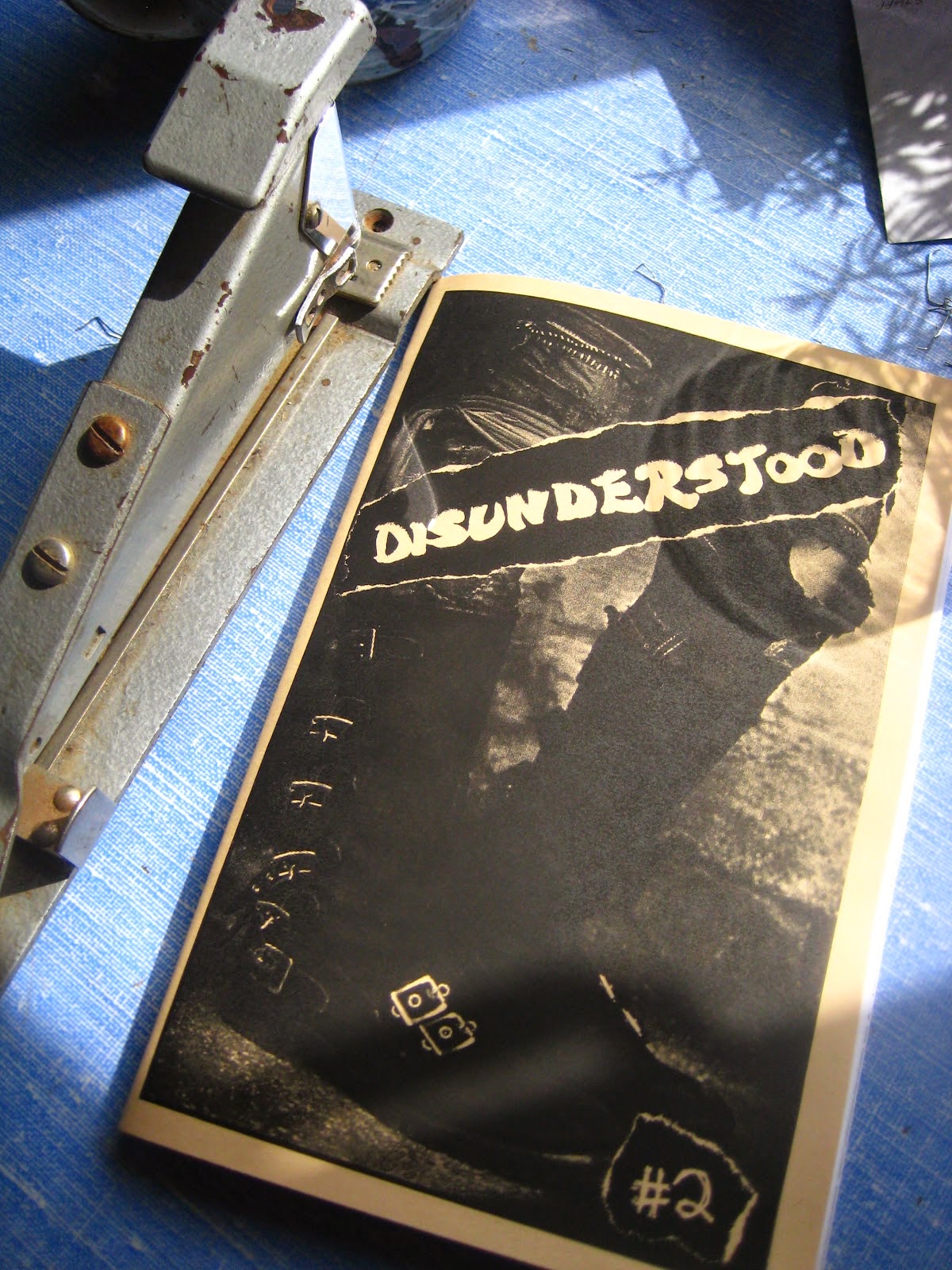 DISUNDERSTOOD is a zine that my friend Sara Double Ears started in 2002. Initially, she was going to call it "Misunderstood", but I happened to be in the room and said something like "What? Seriously?? It should be called DIS-understood!!" The basic premise of the zine is that she attends punk shows with her notebook in hand and writes down what she thinks the bands are singing about. Since she is a part of the DIY punk community, she can usually be found in houses, storefronts, generator shows and warehouses where the PA is always less that adequate. When you throw in the fact that most of the singers are screaming unintelligibly, it is near impossible to discern what anyone is saying. This is why she wrote down that TRAGEDY was singing about gardening and SEXY sang about eating aspertame together.
I love the first issue of DISUNDERSTOOD. I might be the biggest fan, which is why I begged Sara to work on issue two for the next ten years. When I saw that it may never happen. I asked if I could just do it myself. Sara happily handed over her unused files of misheard lyrics from the intervening ten years and I got to work, carrying my own notebook to shows all over the US and throughout Europe. Issue two went to print in 2012 with everything from OUTLOOK singing about being a dog to HYSTERICS singing about sledding to TRAGEDY eating shit and bacon.
I've been self-publishing zines since the mid-1990's and I've never even vaguely entertained the idea of trying to read anything in front of people, mostly because it feels awkward, I don't like the sound of my own voice and being in front of people without the comforting blanket of a loud punk band turns my anxiety level up to 1000. In the fall of 2013, I found myself in Providence, RI for a month. My friend, Mike was setting up a show at (now defunct) Building 16 in Olneyville. For some weird reason, I asked if I could kick off the show with a zine reading from the second issue of DISUNDERSTOOD....the feeling came out of nowhere. He said yeah and I practiced once in my room.
The reading felt okay. I was a lot less anxious than I thought I'd be, but I still sweated profusely and later threw up behind the building. The audience was really nice. It was cool to hear what people thought was funny and what fell flat. Who knew that one of the bigger laughs would come from the statement, "My band played a show with TRAGEDY in Scotland."? I had no idea that my new friend, Erik was recording the set, but he sent it over to me a couple of days ago. Here ya go...

Both issues of the zine are long out of print. Sara and I are currently collaborating on the third issue. When it is printed, you'll be able to buy it here.
Many thanks to Erik-Dardan Ymeraga for recording the show and sending over the files.
Posted by Harvester at 9:30 AM No comments: 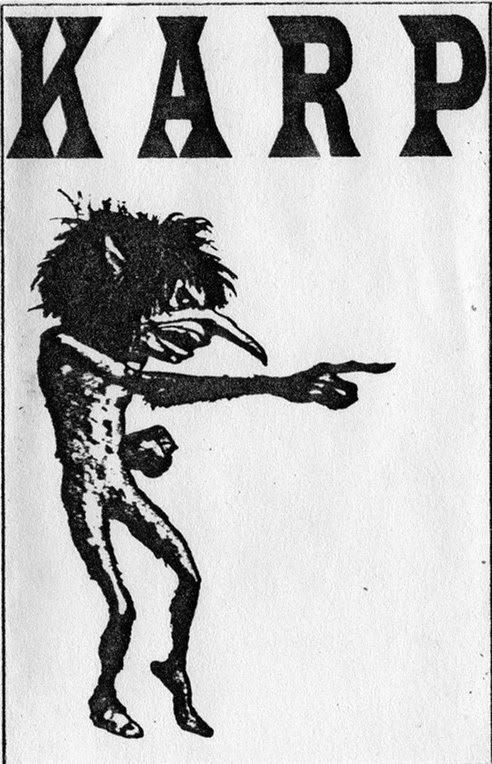 Today's tape and write-up is brought to you by Alex Turner.

This show happened in 1994. 21 years ago, RANCID and KARP played together at an indie rock fest in Olympia. What the fuck? KARP is Olympia's best band. Enjoy.

(ed. note: Sorry if it's misleading that I used the cover of their demo tape for the art.)
Posted by Harvester at 12:05 AM 4 comments: 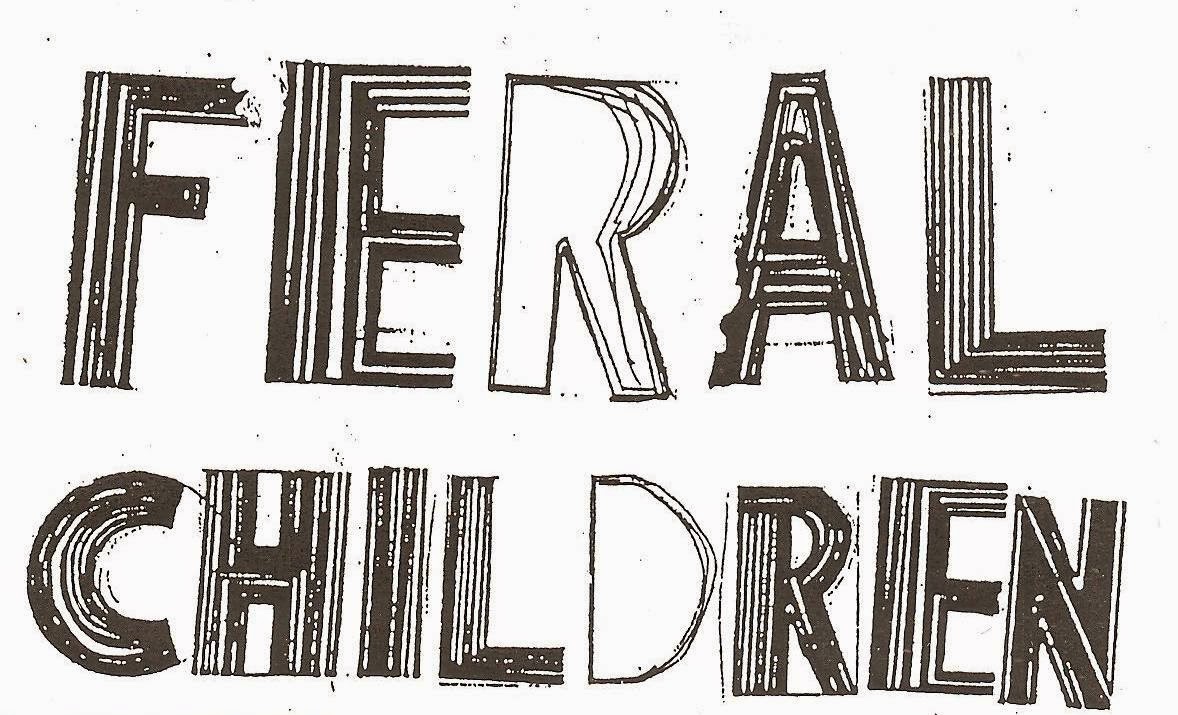 This tape showed up in a box of stuff sent from the east coast a few months ago and it sat in that box until today. Last week, I was in the home town of FERAL CHILDREN, saw this tape for sale in a record store and thought "Oh yeah, I should dig that tape out when I get home."
This tape was written, performed and recorded by my friend, Mikey in a house named Little Pancakes. Once, I was there and ate some homemade pizzas after painting a bunch of blue shit on my face. These days, I'm pretty sure some freak-o's still live there. I've walked by and thought I should just knock on the door and hang out, but I never have.
FERAL CHILDREN sounds rudimentary and wonky...on the verge of collapse and decay. Industrial at times, but never machine-like. Some conventional song structures at times, but like, alternate-reality conventional. Truthfully, I don't know what the fuck I'm talking about right now..I went outside for a while and wanted to kill every motherfucker on the street, so I came home, closed my door, listened to this and it made me feel better,,,like there's other people in the world who just can't take it sometimes and sit in their house and make weird music because it keeps them from randomly punching strangers. Or maybe I'm just projecting. 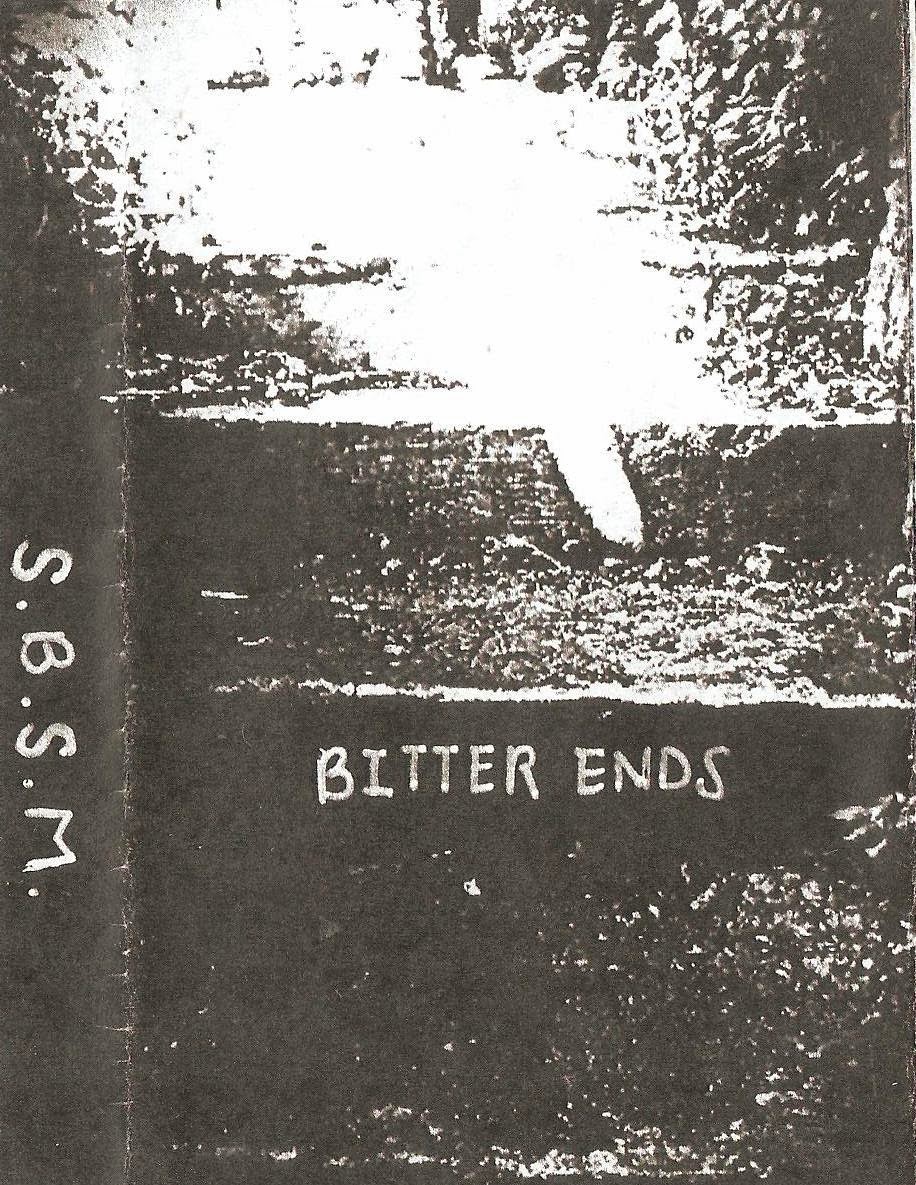 There's this thing that happens when you live in town long enough where everyone just assumes that you know everyone. This isn't true. I started hearing about S.B.S.M. around town. When I asked some friends about the band, they would just say "Oh, you know them...it's (these people) and they played that show at (venue I've never heard of) with (that one band everyone cares about but somehow I've never heard of them)" Well, it turns out that I work with a member of S.B.S.M. Oops.
When I finally tracked down S.B.S.M., they were playing in a tiny basement in West Oakland. Their loud, cacophonous mess of sound was almost overwhelming in a way I haven't felt locally in a long time. The thing that really drew me to them, besides the fact that I was into their music, is that even though it's completely obvious that the three people in this band are very serious about what they do, they don't let that stop them from laughing it off when their broken equipment shorts out mid-song. One of them will use that as an opportunity to explain the song or tell you about an upcoming protest or talk about why they're playing that particular benefit show while the other members change out cables, tear apart wires and try to figure out what the fuck went wrong. And this is all so refreshing for me because I feel like we have entered a stage of punk (and this is just my perspective) where so many bands are trying to be perfect recreations of bygone eras or they're afraid to go out on limbs or they're trying to pose just right for that Instagram photo or whatever the fuck it is that people do. Many bands don't discuss their politics anymore or don't have any politics to speak of whatsoever, but when the whole fucking world is falling apart and there are rape apologists (and rapists) in your audience and cops are killing all the brown people they can possibly get away with and you feel like you're just gonna explode because you can't fucking take it anymore...just fucking talk about it!! Or just take your place in line (or the barstool) next to all the other soulless hardcore bands. 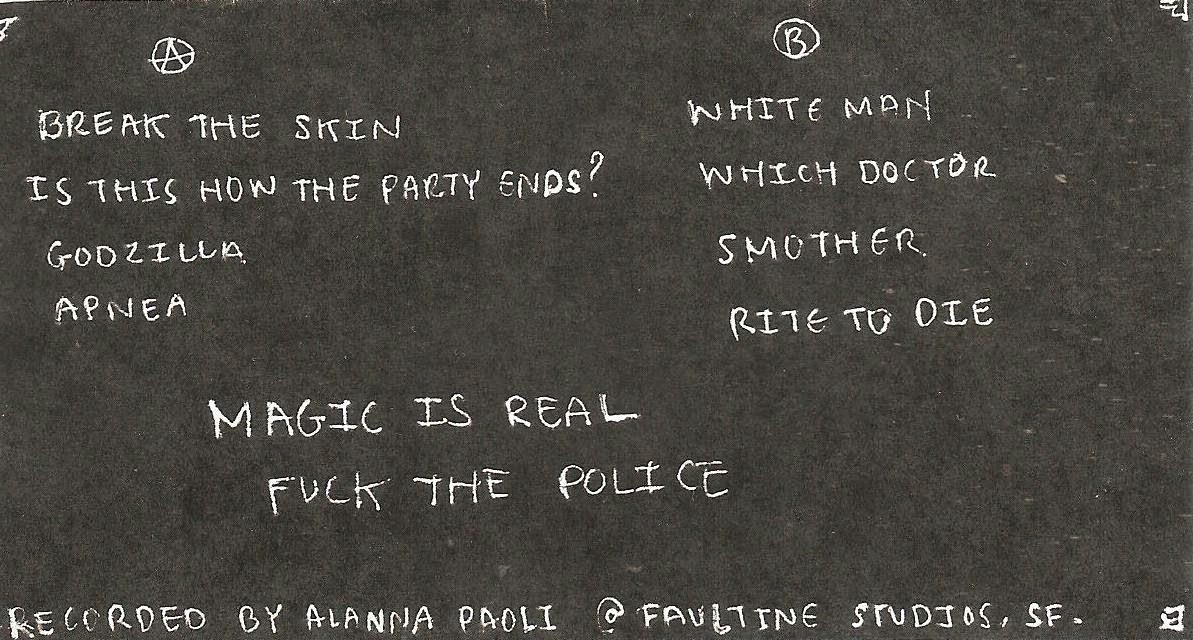 The other reason I like them is that when they play the last part of ":Godzilla" live, it sounds like 30 bombs going off in a haunted castle nestled in a nightmare world. 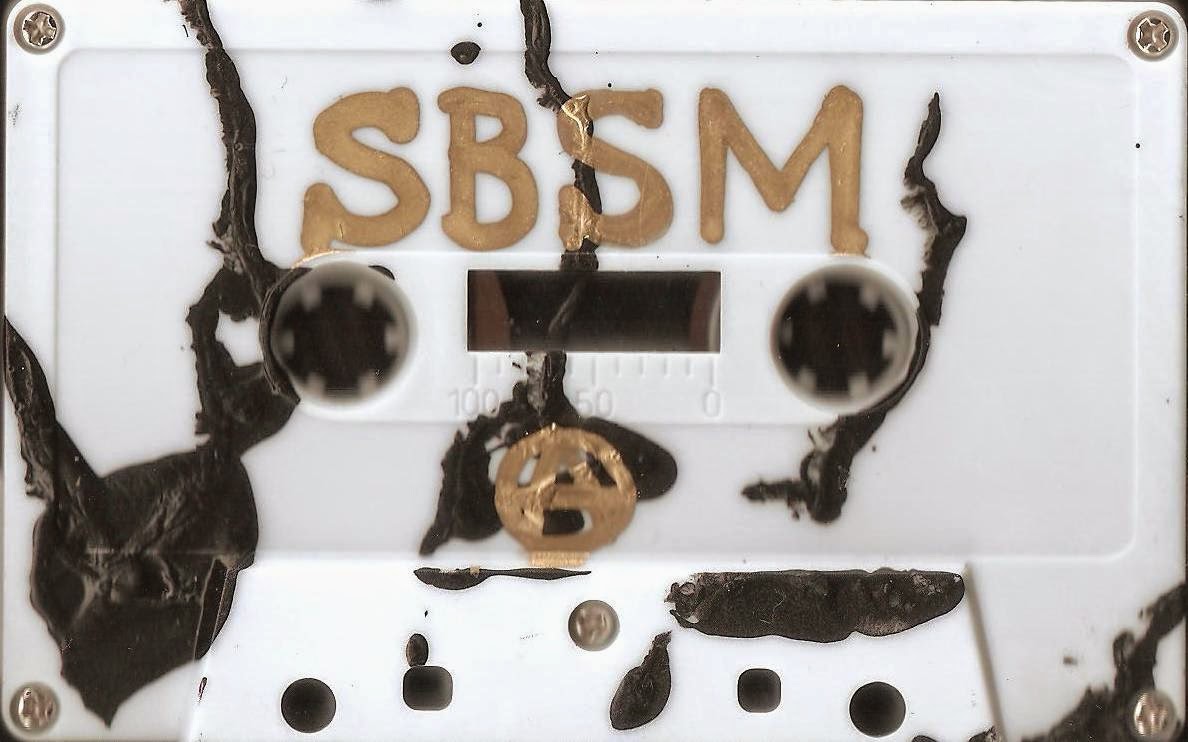 They're recording a new tape soon.
Posted by Harvester at 7:24 PM No comments: 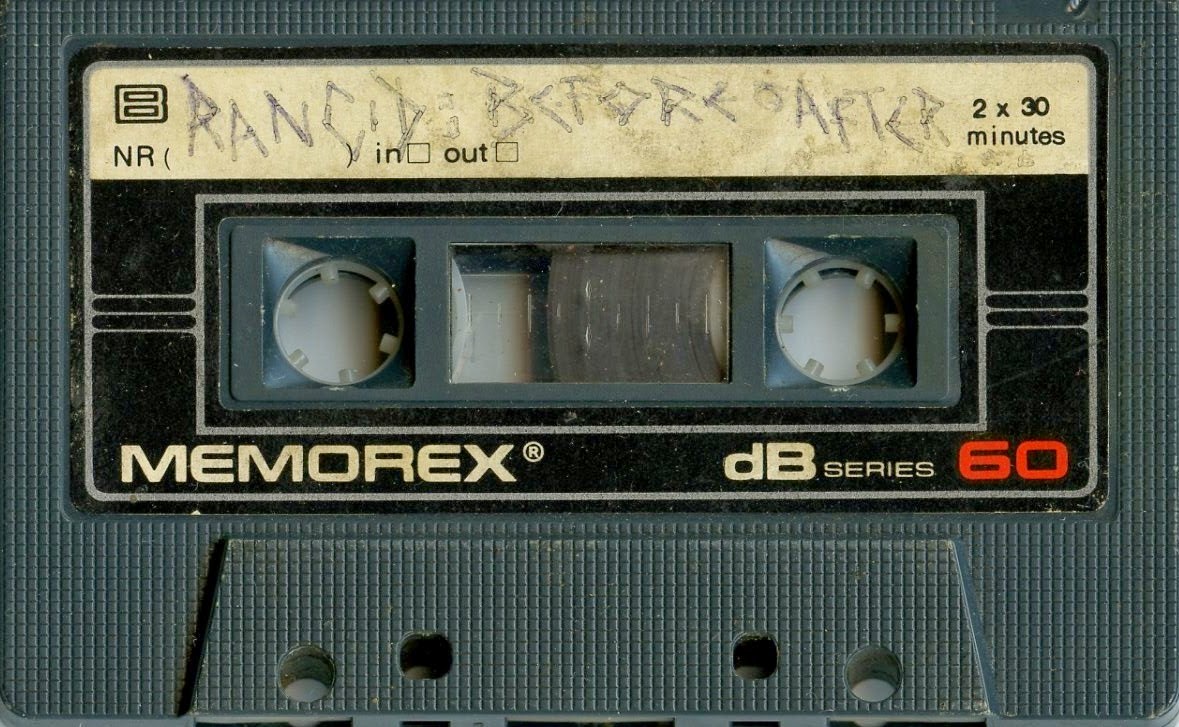 In the mid-90's, I went on tour with my band through Florida and the south. On the tour, we played a generator show in the Everglades next to a rotting cow carcass, we played a VFW hall and we played in some living rooms. One night, we were in Cocoa Beach, FL with a night off and heard that RANCID was playing an hour away in Orlando. At this point in time, none of the members of my band paid any attention to major media (or any media for that matter) and we had the idea of driving to the show to see if we could jump on to the bill. Our guitarist, Joey had slept on Tim Armstrong's couch in Berkeley and was pretty good friends with his neighbors in SCREW 32, so we thought it would be easy to play a short set before them. Little did we know that in the intervening years, Tim's roommates would come home to find RANCID shooting a video complete with a camera crew and deli trays in their living room. That video was played on MTV, the band found their way to magazine covers and were now touring in a completely different style than we were. I doubt they had to jump start their van every time they tried to move it or fixed the alternator belt with a shoestring or chewing gum.
So, when we got to Orlando, the security guards fittingly laughed in our faces when we asked to talk to the band about playing a short set at the show. We dutifully paid our 10 bucks like everyone else and went in to watch the bands. The LUNACHICKS made some speech about how it took a lot of hard work to get to where they were on that big stage. I laughed my ass off at them. Thinking about it now, I can imagine that it was a lot more frustrating for them to get to that point than RANCID, being four women playing punk and metal in the late 80's and early 90's. I'm sure it was also frustrating to think about how Dino, GG Allin's drummer, thought that he had a psychic connection to them and regularly masturbated to pictures of them...but I digress.
RANCID was good. I also laughed at them. A lot. "And Out Come The Wolves" had just been released so they played a lot of songs from that one.
We drove back to Cocoa Beach. I took off all of my clothes and walked in to the ocean.

This tape (that's not it pictured above) was sent over by Alex Turner. It's from the year before I saw them when they played at Yoyo a Go Go in Olympia, WA back in 1994. We're both pretty sure that it was recorded off the board. Alex believes that the details are this: Somebody recorded it, Tobi Vail owned the tape for years, gave it to someone else in Olympia and then it made its way to milk crate at Punkall. Alex brought it back to Oakland and digitized it for you to enjoy. The sound quality is not bad, but a little assy at points.