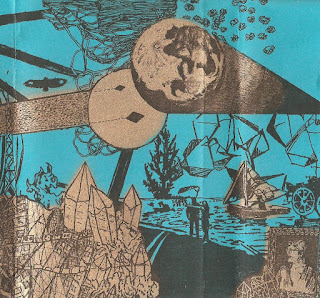 Mugwort, the plant, is said to further one's psychic abilities, enhance your dreams and repel negative energies. If used in excess, it can prove to be toxic...so toxic that it has been used in herbal abortions. MUGWORT, the band, could probably also enhance your dreams and repel a lot of negative energy in your mind. I can't comment on their psychic energies or fetus-destroying abilities.
I was at a basement show in Oakland last week where 2/3rd's of MUGWORT were playing in a new band (their name escaped me) that built off of the player's long histories in other bands like SHITSTORM and THE GOOD GOOD...bands that never seemed to fully get the recognition they deserved (whatever the fuck "recognition" means in your mind...they didn't get it), but succeeded in throwing out loads of incredible music and playing shows that will always stick with me.
MUGWORT enjoyed a brief stint in the Bay Area queer punk scene, playing tons of shows in their SF house near 21st and Capp. I'm sure they played other places too, but I only ever saw them there. Wu banged out insistent lines on their bass while Sara worked around the melodies and just invented her own cool style. Peter drums in a way that is so inspiring to me...somehow effortlessly playing this wild style that is "missed" notes, propulsive cymbals and almost intentionally playing off the rhythms but still holding it all together. They all sing. It's an incredible tape. It's been by my stereo for years now.

They also have a Bandcamp, but it's missing two songs from the tape. I don't know why.
You can also enjoy some of their songs set to video too.
Maybe I'll remember the name of that new band so I can go see them more.
Posted by Harvester at 7:28 PM 5 comments: 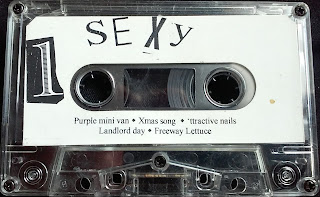 Tapes like these are the reason I started the blog. Trying to track down these nearly ephemeral documents of a scream in dark warehouses and shitty basements is what this thing is about. I don't own this tape, but I thought that trying to get a copy of it would be a task that could be easily accomplished in a few days. Nope. The first post of this blog is dated June 23rd, 2011 and now it's nearly 5 years later. I asked the people who played the music, the people who loved the band, the people who hated the band, the punks who lived with them and I scoured Bay Area yard sales, free boxes and record stores (and their free boxes). Nothing.
Baby Ian (we can just call him Ian now, right?) pulled a box of old stuff out of storage and came up with his copy of the demo...and here we are. I haven't heard this thing since 2001 or so and I forgot how goofy it is. If you're just hearing SEXY for the first time (and I'm sorry if you're just now hearing them) I would suggest starting with their first album (it's right here) because it's a completely perfect snapshot in time of an insane band at their absolute best. It contains all of the drunken abandon, the hooks and the trainwreck-style tempos. This first demo shows the band still trying to find their footing and swimming in drunken goofiness. A few of the songs that were later re-recorded for the LP are downright sllloooooowwww (check out "Purple Mini Van"). Half of the songs on here just got fucking dropped and were never heard from again. Maybe you'll enjoy it.

Technical notes: I'm sure you've come to expect a fair amount of tape hiss on this blog and I will tell you that there is a FAIR AMOUNT of tape hiss on this download. Ian sent over the tracks and I tried to mess with them to lower the hiss and it just sounded worse...so here we are....warts and all. You can even hear some of the tape it was recorded over. History isn't pretty and that's why we all need to keep moving forward.
Thanks Ian.
Thanks SEXY. 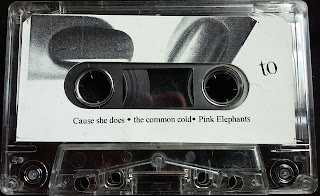 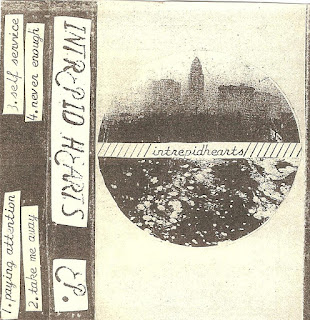 Recently, a personal mission landed me in Minneapolis for a few days and I arrived with high hopes and too many plans. As someone who desperately needs a vacation, this was a stupid idea and I should've just sat in Powderhorn Park for 4 days straight. Instead, I fruitlessly tried to track down some long lost friends and rope unsuspecting fools into my dumbass ideas. Some old friends had time for porch hangs and others kindly offered up comfy sleeping spaces, but largely I was on my own to try and remember how to relax. I never really did. I walked all over the goddamn city until my legs ached. I saw the PRINCE memorial at 1st Ave N, went to the library, became familiar with the Greyhound station, went to karaoke at the Seward, looked at the old Medusa club, walked out to Extreme Noise, saw a gigantic rideable cock in a sex shop and read for hours in Hard Times.
Then, I drove across the country with one of my best friends. When I got home, I found this tape in my mailbox and looking at the return address, I realized that I walked by this band's house (or one of them) at least twice in the past week. I could've just picked it up while waltzing by. It also would've been nice to have these songs blasting in my head while walking down the streets that inspired them, but I was happy with the S MPLS weirdo tapes I got instead (more on that in the future).
I think I only know one member of this band and she (Britt) has appeared a few times on the blog in the bands B ARTHUR and BABE QUEST. Even though the BABE QUEST song "The Wait" can not be trifled with in any capacity, INTREPID HEARTS may be my favorite band that Britt has ever been in. I keep having a lot of thoughts about the songs and everything I think feels like a backhanded compliment, but it's genuine in my head!! Like, this band has cool "hot licks"!! Ya'll listen to metal, right? I truly like POISON (I know that's not metal) and I wanna say that the members of INTREPID HEARTS like POISON. Maybe they like THIN LIZZY. What the fuck ever. I don't know what they like. It's hook filled melodic punk that is truly tight as fuck. The vocals have the perfect amount of bite and rasp. I'm gonna go ahead and compare them to my ex-bandmate/current roommate Ivy (ALLERGIC TO BULLSHIT / MIAMI / BLACK RAINBOW) because Ivy's voice is great and Britt knows that because I once heard her tell Ivy that. There is no cowering in the shadows though because we're all just people doing our thing out there in the world and Britt has been doing her thing for a long time and it shows. This band sounds like they've been doing their thing for a long time too, but this is their first tape, as far as I know. It's a truly great tape. You should write to them and try to get one off of them because it has a lyric sheet and a lot more plastic than an ephemeral download.

Thanks to Cobs for mailing me a tape. I'll knock on the door next time.
Oh, the other thing that felt backhanded is that the verse part of the first song sounds like it was ripped off from "The Descent" by BOB MOULD, but there's absolutely nothing wrong with that and I'm sure it was unintentional and, like, Bob Mould doesn't own the rights to those chords or anything.
Posted by Harvester at 6:30 PM 2 comments: