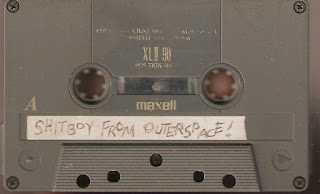 So, it's been a minute...or two whole years, honestly, but quarantine and isolation do weird things. Let's get to the point of this entry and then there will be extra info after that.

SHITBOY FROM OUTERSPACE is no stranger to this blog, having appeared here and here, but I thought this first demo was lost forever. Recently, it turned up on a tape that I found in the bottom of a drawer and I couldn't be happier. This first version of the band featured Joey Tacon (THE SLACKERS and JOEY TAMPON AND THE TOXIC SHOCKS) on vocals, Jason Burke (565 BURNOUTS and 15E) on guitar, Robert Daniel (THE SLACKERS and THE PEEPS) on bass and Elijah Horgan (THE PEEPS and NIGHT SIEGE) on drums. As I remember, they recorded this demo in a studio (probably Smokin' Studios where almost all of the local punk bands tried to record) and did the whole thing live in one take in order to save money. [Sidenote about Smokin' Studios: the place was mostly just a room in an office park with egg crates nailed to the walls. The guys who worked there would give us good deals because we (the punks) were quick and didn't try too hard for the best sound. Being in a studio was special and just being a step up from a thrift store boombox felt like an 88 track wonderland. Still, we all should've tried just a little harder].

The songs here are fast and loose in the best way. One of my personal favorites here is "Fuck the Goddamn Master Race" with the (sadly) eternal line "Fuck you, you stupid nazi fuck!" A runner up is their theme song (every band should have one) with the line "Crazy, crazy, I'm motherfuckin' crazy!" I did my best to clean up the sound, but this is a 25 year old recording that was already assy to begin with, so don't expect the Silver Jubilee digital remaster, but if you've checked in on this blog before, I'm sure you know what you're in for.

The download features the entire recording as one mp3, since there are few breaks and also an extra folder with the songs split up.

Oh, you're still here? Yeah, I haven't updated this blog in two years and there are no plans to keep updating it with any regularity at all. I stopped doing this thing because I feel like it ran its course and I was no longer having fun doing it. I started this to share a lot of old recordings with the people who were around at those times and, just as importantly, with the people who were NOT around then and could benefit from hearing all of this rad lo-fi shit from the middle of nowhere. Part of me started to feel like a gatekeeper of sorts though and that is a bullshit feeling. There are no gates. Anyone can do this. It also felt weird and very disheartening to find that some people had parceled out some of the comps and other recordings here to only showcase performers online who went on to find fame or a larger underground notoriety, which is maybe the opposite point of this whole site. I don't feel like I should have (or would even want) any control over what happens with these recordings once they are on the internet, but finding that shit is just gross. There's so much going on in the underground at all times and people still just want to focus on the brightest star in the sky, so far out of reach.

I hope ya'll are safe and keeping your head above water. Fuck this fascist power structure forever.