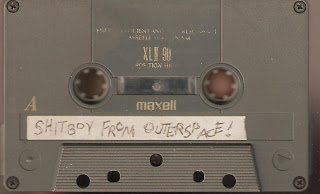 SHITBOY FROM OUTERSPACE was a 1-2-1-2 style hardcore band from Huntsville, AL that specialized in playing 10 minute shows that left behind broken shit and blood. At their first show ever (also at the Tip Top), their singer Joey broke a bottle over their guitarist's head to start off their first song and knocked him out. I think that was also the end of their set.
They came along at a beautiful time in the northern Alabama punk scene, when it seemed like everyone was starting to do something musically exciting and invigorating. While some bands were playing post-punk, surf or pop-punk, SFO played a style of spit-in-your-face blasts of punk where the songs rarely lasted over 1 minute and usually didn't contain many more words than "Fuck you!" Enjoy this thrashed tape of their 7 minute set (includes 5 songs and lots of banter) at The Tip Top in Hunstville, AL, a place that deserves its own entry one day.
Download SHITBOY FROM OUTERSPACE
"This song is called 'Iconoclast' and it's about being a fuckin' reject" yes!
Posted by Harvester at 6:08 PM

Cool, this was one of my first shows. I think somebody got stabbed at this one. I'd love to see a whole post on the Tip Top, what a dump.

Wasn't "Fuck the Goddamn Master Race" on here too?

I wish "Fuck the Goddamn Master Race" was on here but it's not on the copy I have. Maybe it's on the old demo with Joey singing, which I also have in my room somewhere.
Blair send me your email address to riceharvesterATyahooDOOTcom

Also, I'm glad that I learned once I moved out of Alabama that it's not a normal occurrence for people to get in gigantic fights or get stabbed at every show.

Or that bars will sell fifteen year olds beer.

Any luck at getting the copy of the tape with Joey singing on here?

Had it in the past, don't know where it went.

Well, Joey sings on this...but if you're speaking of the old demo, no. Honestly, I haven't tried too hard to find it, but I'm sure it will turn up sooner or later when I spend more than 2 minutes looking for it.

Maybe someone could send me copies of the tape? Joey did sing on one demos, but I think was only in the band for this show. Matt Seward was also in the band for a show. Also, this show was more like half an hour or more, so there is more to it than this. So yeah, I'd love any copies of SFO or 15E demos/live shows you may have, as I don't have many of them. Love, Jason mobofsquirrelsatyahoodotcom

MR Burke!
I'll digitize that stuff in the next few weeks and send you copies of it. I have a bunch of SFO stuff somewhere and maybe a 15E live at the Tip Top tape.

Awesome, much appreciated. I'm guessing this is greg?

Greg. If you "digitize" that can ypu post it on here? I'd love to get copies as well.

This is Shawn R. I'll dig through my stuff to see if I have anything you may be interested in.