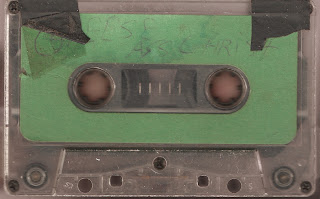 I'm trying to think of what I could possibly tell you about CHEESE-ASS CHRIST from St Mary's GA (don't even act like you know where that is). They were a pissed off punk band that sang about stupid skinheads, stupid lowriders, stupid war and...uh...neutron soup, whatever that is. They had that crazy treble-y 80's production that only sounded good when it was done by bands that are over 20 years old. They had an anti-senior citizen song that had the inexplicable line "Soon, we'll all be chicken people!" I later found out that their singer Joey, referred to old folks as "chicken people" for some reason. Speaking of Joey, he sang in this nasally whine that wasn't affected at all. He really talked like that all the time and it soon became his signature in his later bands THE SLACKERS and JOEY TAMPON AND THE TOXIC SHOCKS (half of CHEESE ASS CHRIST was in J.T.A.T.T.S). I asked my good friend Harry to tell me a little about the band. He played bass for them when he was 13 years old and here is what he had to say:
"Recorded summer of 1990 in Welaka, FL. just South of Palatka.  We had to drive twenty minutes out of town to get a pizza. The studio was at this wild, stoner-rock, hesher-esque dude's house, who did not participate at all in the recording process. He showed us how to set the levels and deserted us to return to his house with his stoner buddy to get, uh, stoned (i reckon). He did have really great comparisons for things... The second night we ate microwave pizzas from the IGA that he said tasted like the bottom of a shoe with dog poo on it. (that, of course, is not the best one, but is the only one I remember because Dave, the drummer, kept repeating it.) There was a machine gun guitar that we really wanted to use, but it didn't work (I once had a photo of me playing it).

So, Neil (the guitarist) pretty much figured all the technical shit out, you know, levels, stupid phaser effect on "Underground Babylon," etc. I remember a lot of that weekend cause it was a new experience and I was 14 and straight edge, of course, so... Not drunk, unfortunately. Dave, our drummer, was the biggest Rush Limbaugh fan, it was really annoying. I rode to the spot with him from Saint Marys, and, when he wasn't listening to the Mighty Mighty Bosstones, he was listening to Rush Limbaugh and telling me how intelligent he is. Actually, I really don't understand why Dave was in the band; he's a total republican and he had a low rider truck with a booming bass system. Anyway, our only show ever was a total catastrophe. We drove all day to Melbourne, FL. To play to a bunch of thrash kids. Chokehold is the only band name I remember, other than ours, obviously. At one point we thought Joey was going to be pummeled for wearing a "fight racism" shirt. But it turned out that the skinheads there were SHARP's (which, to me, just meant that they weren't openly racist, just openly classist). Highlights of the trip were Joey punching a sandcastle version of the Sphinx in a local mall and it crumbling. We played very bad because Dave kept stopping because his hands hurt from driving, is what he said."
There you go...the legacy of CHEESE-ASS CHRIST. Members of this band went on to play in the aforementioned bands as well as ADD/C, RICE HARVESTER, 565 BURNOUTS   and a whole pile of others. In a surprise 180, Joey later found the Lord and now preaches the gospel in Alabama.
Really.

YES! I've been waiting for this tape since I found this blog. Awesome.

What are you using to rip and tag this stuff? I always get either no tags or weird scrambled stuff, like this says "Cheese" is the band name and "Ass Christ" is the album.

Wow, there was actually someone waiting for this! Harry will be weirded out, but then, not really once he sees who it is.

I'm using Audacity to do this because I don't know how to use anything else. It's weird that you are getting that effect. I've downloaded stuff from here just to see if it's working okay and it seems fine. Maybe I should be using iTunes as well or something. I don't know. I really don't know what I am doing. Any suggestions are welcome. I don't even own an mp3 player.

Yeah, Audacity's probably the best thing to use, but the tagging thing seems to be screwy. You could run it through a tagger like mp3tag or whatever to double check - there's tons of free ones. (I don't use Itunes either by the way)
One other thing I would suggest: change the default mp3 output in Audacity to 320 kbps. It's in the screen where you save and name them - hit the Options button and you can adjust bitrate. Your files will be a bit bigger but also sound fuller and less compressed.

God, that video of Joey is fucking surreal. Yikes.

Thanks for the info. I will try it. I'm also glad you found my hidden link

okay so i've done a little poking around on the internet and came across an email address of joey's in which i can contact him. i kind of want to email him about the good old days (slackers and JTTS). I just don't know if i should, outta respect for him, because i don't know if its a sensitive subject for him. i mean, he did do a complete 180 after all and i wonder if he is somewhat ashamed of his past?

I can't even begin to tell you how to approach this because I haven't talked to him since 2999 or so. By the way, who is this?

i'm just a fan, not a close personal friend or anything. i've written you once. but yea, i decided to go "anonymous" because i just wasn't too sure how to go about doing this, but i think it'd be interesting. i mean, i wouldn't bash him for his religion or the 180 he made, i'd just like to know more about it. i find it VERY interesting. he went from singing "i wanna blow up a building" to giving church sermons.

I also find it interesting. If you go through with it, give an update.

ok greg, i just sent out an email to joey, i'll let you know how it goes.

Not sure if you still update this portion of the blog anymore, but I would love to get a hold of this demo, the download link doesn't seem to work. I'm working with a production company here in Southeast Georgia and am currently working on a Documentary focusing on the early to late 90's punk scene in Southeast Georgia, I would love to get a copy of this and if possible use your blog as a source for quotes.

I re-uploaded it. Quote away.