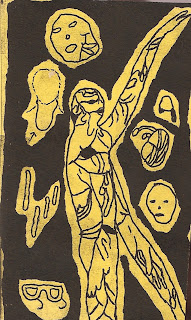 When I lived in Indiana, I used to tell people that RUSSIAN TSARCASM (this band's former name) was my favorite local band, which was true. One day, I realized that I didn't even know if Carlos (the brains and braun behind this project) knew how to play any instruments at all. You see, RUSSIAN TSARCASM was more of an experience and performance than a sonic onslaught. Sometimes, it could be dangerous, like the time Carlos jumped into piles of broken glass and ran into the crowd screaming and bloody. It could be confusing, like the time he just sang along to a recording of a toddler singing accapella. He was swinging a hammer the whole time and at the end of the song, he smashed some glass bricks with cassettes taped to it. Afterwards, he said "I have some tapes for sale" and he tried to sell the bits of broken cassettes to people. Once, RUSSIAN TSARCASM played 12 shows in one day in 12 different outdoor locations. I only went to the last one and it consisted of a shirtless Carlos being dragged around by his legs while I ran after him and spit on his chest. Another time, he played a show in a basement for 24 hours straight. I went to it about 16 hours into the show and he was in the basement alone chanting in a pile of glass with a steak taped to his chest.
After saving his money from working at a Rally's drive thru (Carlos said he took the job so he could see how "normal people" lived), he took a logical step for once and moved his weird ass out to Providence, RI. It created a void in the Bloomington noise scene that could never be filled. Carlos changed the name of the band to RUSSIAN TSARLAG and actually started playing instruments It was mostly Carlos playing a stand-up drumset and singing his songs which brought new meaning to the word "minimal". He put out some tapes and an LP or two (I can't keep up). One of his LPs featured a BEACH BOYS cover song and it was paid for with a grant...which basically means that the state of Rhode Island paid for some weirdo to interpret Brian Wilson.
This tape is hard to explain and I'm not going to try. Fuck it.
RUSSIAN TSARLAG 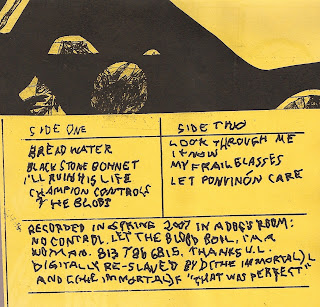 Most of this sounds pretty made-up.

So does your name.