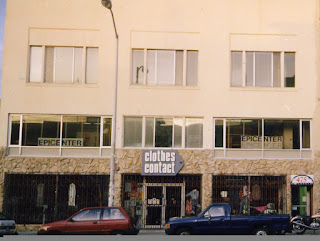 Epicenter Zone was a record store / info shop / zine library / show space / punk hangout that was located at 16th and Valencia in San Francisco's Mission District from 1990 to 1999. It was started by a collective of people that had a strong influence from Maximum Rocknroll (and their money). I don't really feel qualified to talk about the origins because I wasn't there. I also don't feel capable of talking about their demise because I wasn't there for that either. It could've been from the damage caused by a pipe bursting at a HIS HERO IS GONE / GAUZE show, but that happened a full three years before the store actually closed. It could've been because MRR pulled their money out. It could've been because of infighting. I have no clue and don't really care. My experience with Epicenter was short and sweet. I spent an afternoon there reading zines from their library while Lance Hahn worked the counter and played records.
This past year, a crew of people got together from the Epicenter days to organize a weekend of shows, panels and readings to celebrate the zone's 25th birthday. In the true spirit of the place, people dropped out of the planning left and right. Others said they would do stuff and never followed through. The cheap venue that was booked flaked out pretty last minute and the few organizers left had to book a pricier place and charge a heftier door price. There was also a shitty garage fest in a park across the bay. They ended up losing money on the whole thing. In the end, the entire weekend was distilled down to one long, sprawling all-day show at the Verdi Club with entirely too many bands and too little "stage management." (I previously made a decision to keep this blog positive, but I'm gonna drop the rule for this entry.) I believe that the organizers tried their best to do what they could with the resources and people that were available, but trying to cram that amount of performers (nearly 30 bands) into one day was a logistical nightmare. Some people had obviously not been on a stage in about 15 years and took their time to relish the spotlight for much longer than their allotted 20 minute set times. Other bands just acted like entitled fucking babies. For a scene that was very wary of anything remotely smelling of nostalgia, the event was almost nothing but a nostalgia-flashback...even though there were lots of current bands on the bill and lots of organizers involved who still do not subscribe to that shit. To be fair, I contributed two shit shows to this event. (1). I played a terrible (but still not the worst) set with SHOTWELL that should've been cut short by someone. I couldn't think of a better time for one of those giant hooks that pulls people off of a stage. (2) My current band, SILENT ERA, played a very rushed, sloppy and angry set in the corner of the room for about ten minutes.
There were some good things though! KICKING GIANT was amazing. SBSM was and still is an unstoppable force. The fry bread being served out front was to die for. GIRLSPERM played their first show! They were so good, but most of the nostalgia punks had already gone home to watch Netflix or something. Gorgeous Vermillion did a cool performance piece that was so quiet that you couldn't walk across the room without disturbing it. There was a Lance Hahn tribute band who played J CHURCH and CRINGER songs...I legit cried because I was mad that Lance died and couldn't be there to just play the new J CHURCH songs that we were all sure he'd still be writing.
Anyway, what I'm trying to say is that people tried hard to make a fun event and for some people, it was fun, I'm just a huge grump.
I put together a playlist that was blasted over the PA between bands all day. It's a mix of Epicenter favorites and newer stuff...even stuff from the last few months. I just recorded myself DJ-ing the vinyl on two turntables at the Maximum house. Here it is, split into two very large files...100 songs in all.

I took a break from the blog to work on some other things, like putting out a new zine and working towards putting out a new record (out in 2016). The blog will be more regularly updated now. You can order a zine from Remote Outposts. 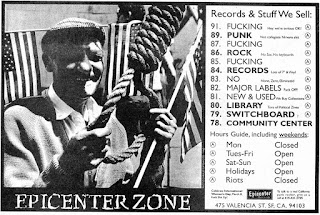