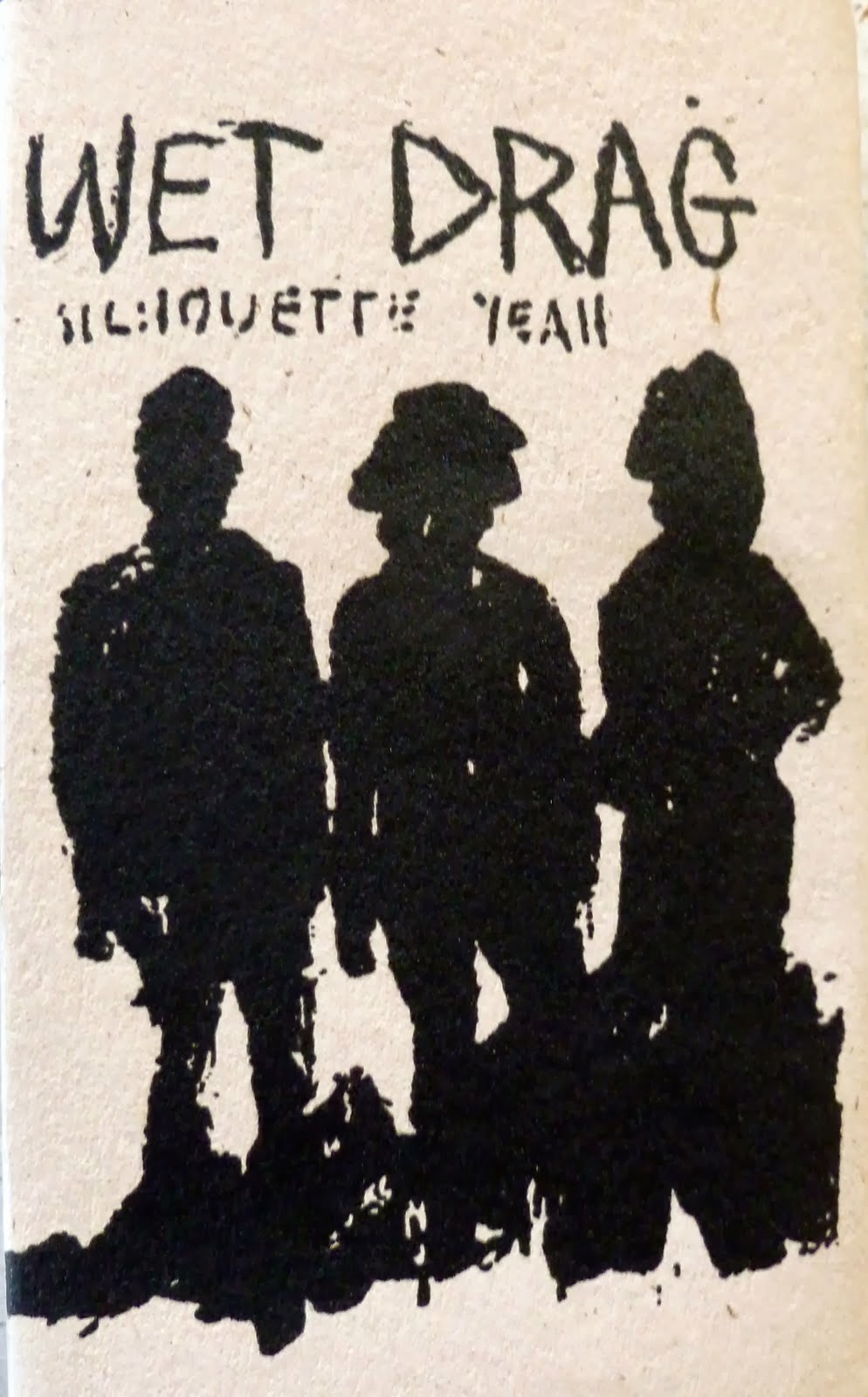 WET DRAG is a band I've never seen and I'm not sure if they're even still around. Are either of these things important to you? I doubt it. In the past, I said that this band seems to combine the different aspects of the members' other bands (STILLSUIT, UZI RASH and GRASS WIDOW [a.k.a. Glass Window] is the short list), but now I don't think that's wholly accurate. Is this important either? No. Is this tape good? Fuck yeah. I have nothing else to say.

Posted by Harvester at 10:50 AM No comments: 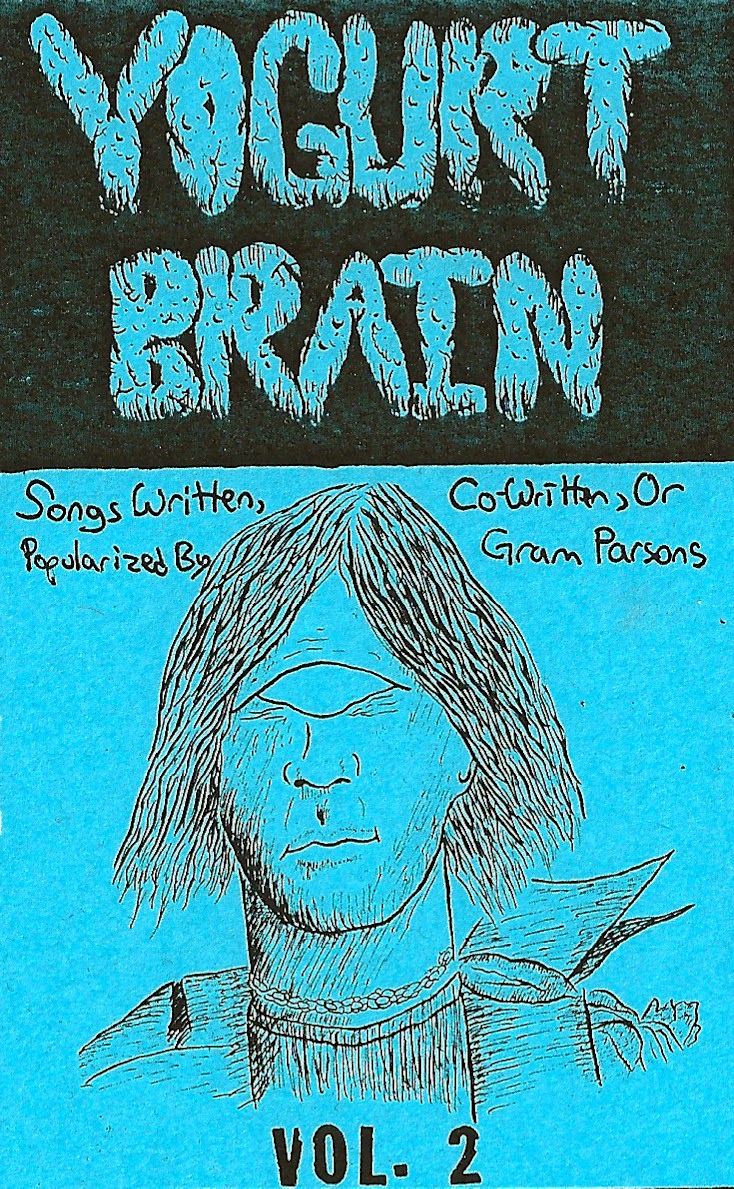 Sleep has been an elusive beast lately and out of the last 48 hours, I've only slept for 3 of them. During that time, my much loved (and kind of fancy) bike got stolen through no fault of my own. It's really bumming me out because I use it every single day and it has been a constant help in my everyday life. This is the third time that a bike of mine has been stolen when it's been secured in a place that I live and I'm sick of it. It also pushed me into a random decision to stop being a nice person. So, if you meet me in the future, be prepared for me to be a total asshole to you.
I'm going to try to sleep and I put on this YOGURT BRAIN tape, which is the brainchild of my friend and practice space-mate, Steve-O. They've been an active band for a few years now and along with his bandmate/drummer, Stephen, they've been slugging it out in backyards, bars, warehouses, living rooms and street corners, playing folky/rocky/somber and energetic music. They play a lot of covers. On this tape, they stick to songs "written, co-written or popularized by GRAM PARSONS", a man who died in the desert from an overdose of morphine and alcohol and then had his dead body stolen by his friends in a borrowed hearse so that they could fulfill his dying wishes of having his body cremated at Joshua Tree. Dude....I'll just go ahead and put this out there...please don't let me have a funeral in a church and have people talk about God around me. You're welcome to steal my dead body and burn it in front of Cancun on Mission Street.
Anyway, this is a beautiful tape and they do an excellent job of faithfully rendering some classic jams. They also have a Vol 1 tape out there, but I posted this one because the other one, while also great, contains a GRATEFUL DEAD song. I try my hardest in life to shed the internalized racism that I grew up with. I think homophobia and transphobia is about as fucked up as killing someone. I do my best to not be an ableist prick. I try to keep myself open to new ideas and new experiences and I want to accept people for who they really are, even when their ideals and ideas don't align with mine in any conceivable way (except cops)....but goddamn I hate the GRATEFUL DEAD and many of the people who love them. Just let me have that. Let me hold on to that hate and let it fester. That being said, YOGURT BRAIN's "Vol 1" tape is good too.

Members of UZI RASH, HUFF STUFF MAGAZINE, YOOTS and so many more that I can't even keep track.
Posted by Harvester at 10:12 AM 4 comments: 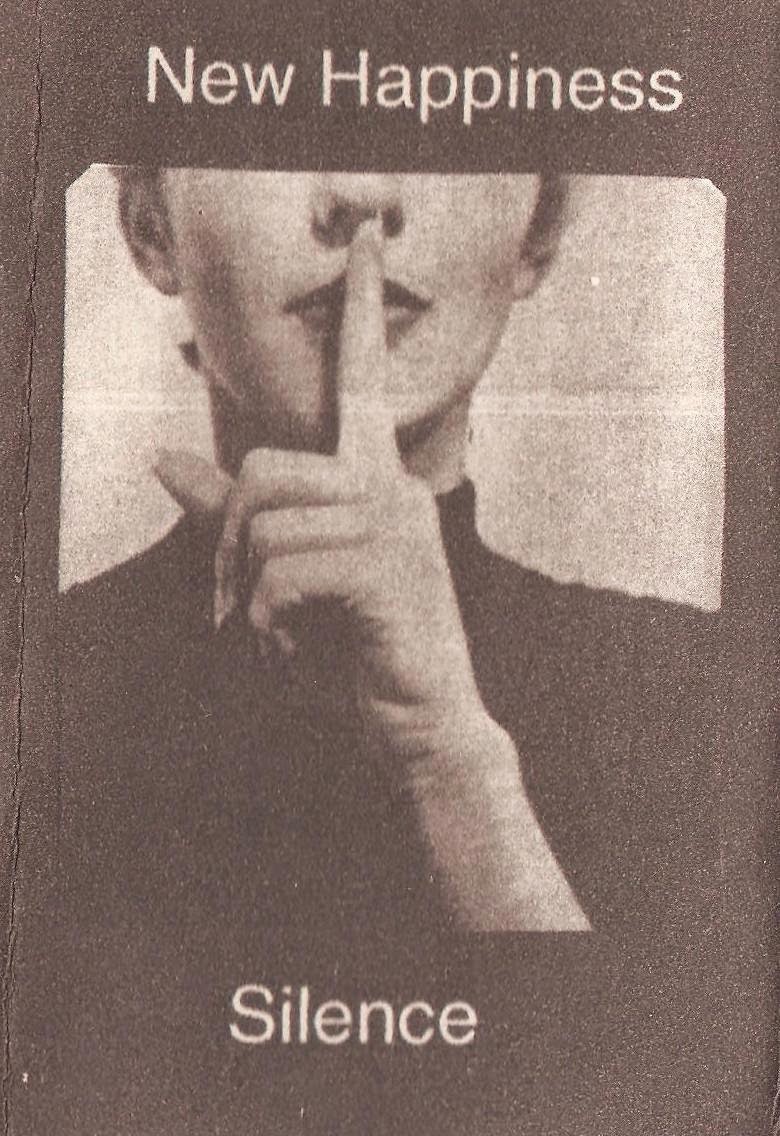 I got this tape sometime last year without truly realizing the band was from the neighboring city of Oakland. Their location may be the least important thing about this band. Anyway, I listened to their tape, liked it and wanted to see them, but with a little bit of digging, I found that they had already broken up. My fucking loss.
NEW HAPPINESS plays a dark style of post-punk that is so post that it's maybe not even actually punk. Like, maybe they just decided to start a band after listening to a bunch of SKINNY PUPPY one day. What the fuck do I know? It's a little goth sounding with some crazy metal percussion that sounds like synthesizers sometimes..but is actually just a bunch of metal junk. Sometimes, the vocals are a little too over the top for me, but that's just me. Maybe you like over the top. 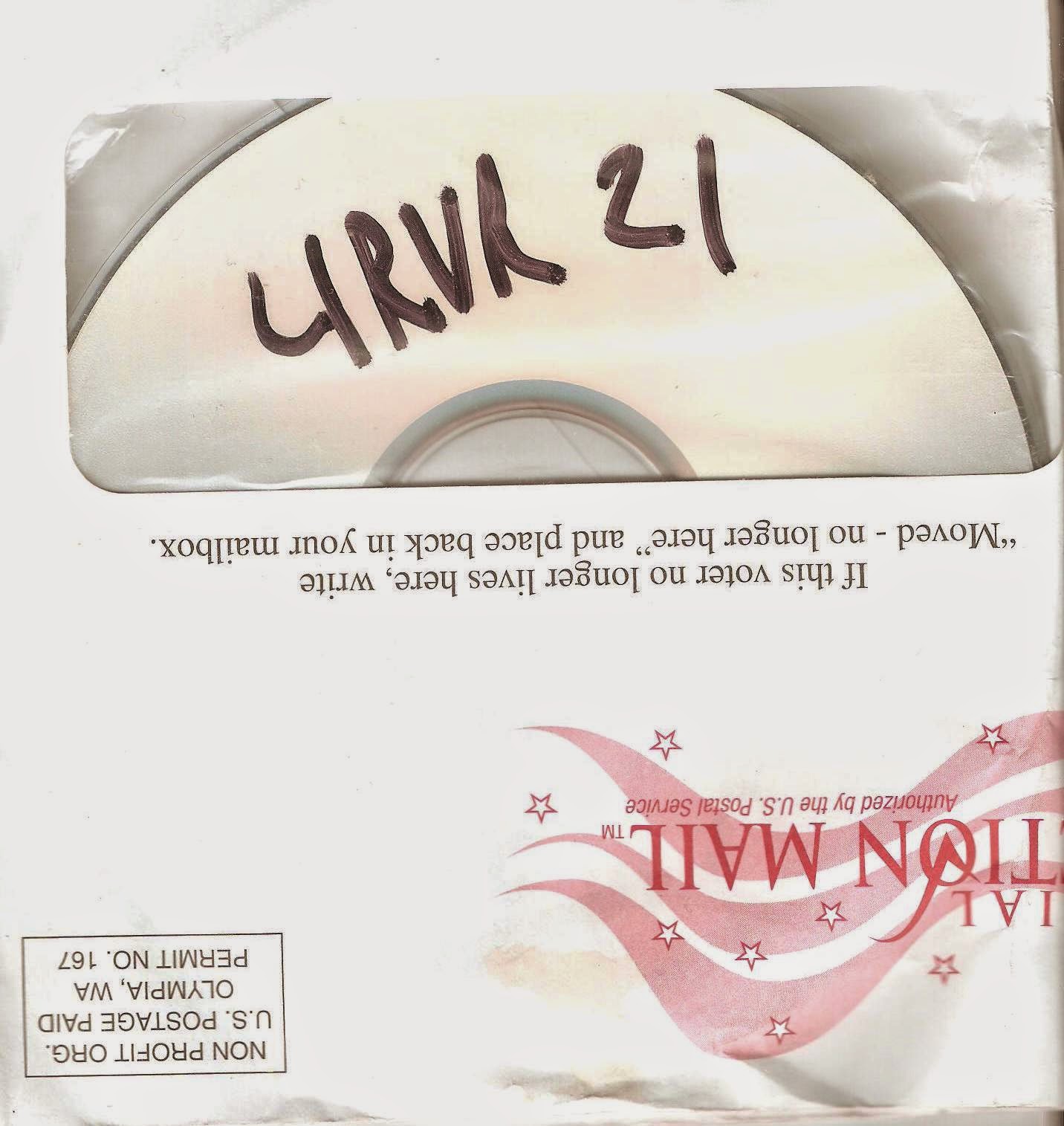 Ten days ago, I posted a tape on the blog and said something like "I'm back from my break!", but then insisted on a self-imposed computer vacation. Partially, I imposed this break because I went on "vacation", but also because the world is too much to handle some days. On my trip away from my home, I was joined by some old and new friends. We spent a lot of time casually talking shit and gossiping in the car. We followed that up with intense discussions of unjust police brutality in Ferguson, MO, unjust (and never-ending) invasions of Iraq to combat against ISIS, kids (and everyone else) being fucking bombed in Palestine and even more cops killing innocent people in St Louis. We usually followed that up with long stints of looking out the car window at beautiful mountains while listening to heartbreaking music.
While traveling, we all separately (and together) had a great time, but these issues stayed in the back of our minds. At one point, I watched someone accidentally fall from over 15 feet up and immediately go unconscious. I was surrounded by drunk punks on all sides and was immediately ready to put my meager medic training to good use. Luckily, the woman with the face tattoos who I had just met was a nurse. Another woman was a medic. My travel partner from the needle exchange was on the phone with 911. CPR was being administered. Everyone else was collecting all the dogs, opening up the gates, giving people space...no one panicked. It was intense, but everyone (by everyone, I mean over 150 drunk punks and dirtbags) did exactly the right thing and the paramedics were wheeling the person out within 10 minutes. They're gonna live. Trust me, if shit ever goes down, I want to be surrounded by smart punks like that and not a bunch of fucking norms.
In the midst of all of this, a friend of a friend in the community had just taken their own life. I didn't know them, but it had directly affected nearly everyone around me. I found myself vacationing in their town while everyone was in various states of crisis, disbelief, shock or self-care (or self-harm). I spent my time reading on the sidewalk, laying in the park, giving all of my anti-anxiety meds to people in shock and hanging out at the punk show. I didn't know what else to do.
In a meager attempt to make a long story short, I have been finding it hard to just simply and casually write about a punk band's demo when there is just such an overwhelming amount of fucked up shit happening in the world (to put it into the simplest terms possible). Concurrently, I still want to actively put positive energy into the world or I will crumble up into a depressed, unwashed, slimy ball of a useless human being and never leave the four walls of my tiny room ever again. So, here's your fucking demo....
4RVR 21 played the basement punk show that I went to in Olympia, WA. In the beautiful spirit of everything punk, they had formed their band less than a week before the show, wrote three songs, learned a cover song AND recorded a demo. This demo is being posted online within a week of the band forming. Purportedly, the show I attended was rumored to be the only show that the band will ever play, but time will tell the truth. During their set, their singer Jeff made some sort of off-hand comment about insurrectionary anarchists having their rent paid by their parents, which later led to him being angrily confronted and pulled into a lengthy discussion with the anarchists about the things he said. I think it's important to back up the things that you say and I'm sure that I'm missing some nuances of Olympia life, but....I thought about Gaza, Ferguson, the cops, Iraq, ISIS, people getting concussions, people taking their own lives, children getting bombed, the ever tightening grip of the all-encompassing police state that we find ourselves living in and I thought to myself, "You have nothing better to do than get unreasonably upset over an off hand comment made to 20 people in a basement?" 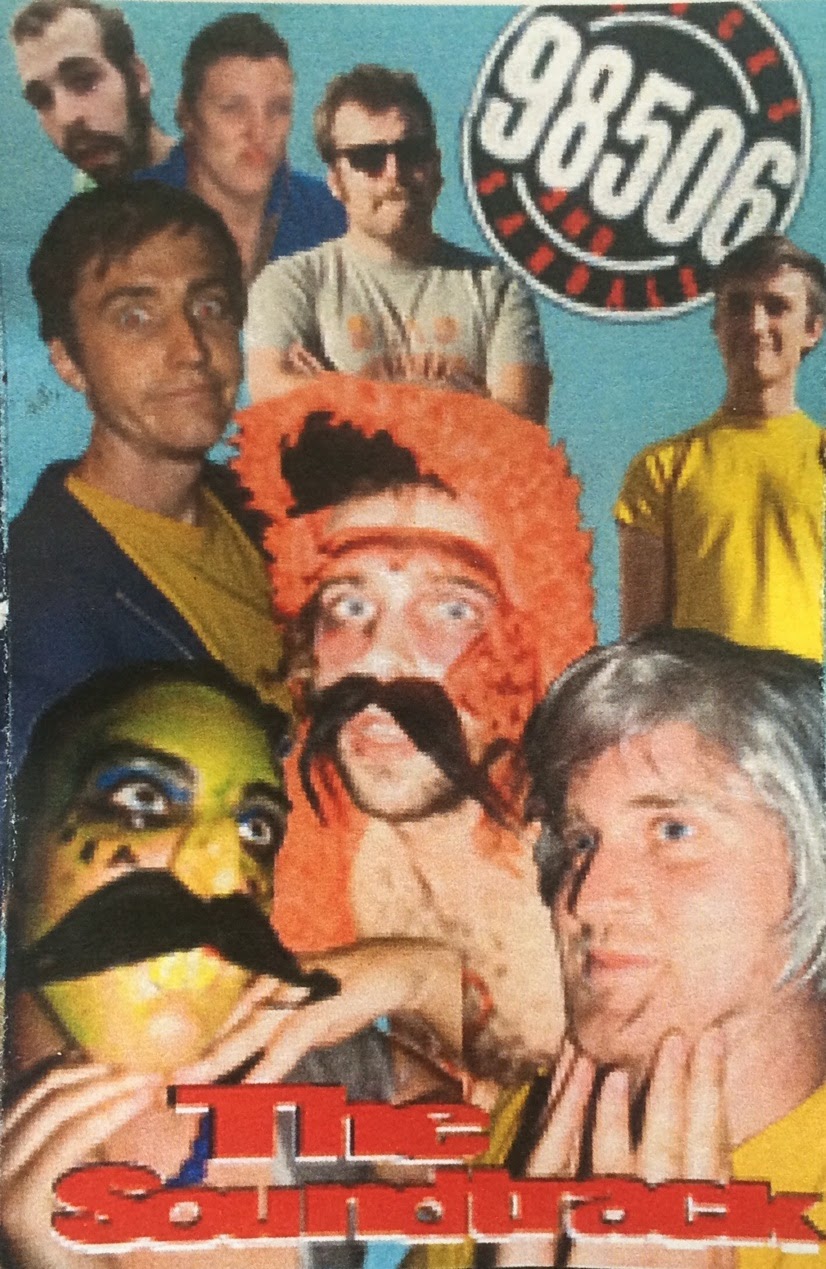 I had to take a break from the blog for a minute to move my hundreds and hundreds of tapes to a different location (in addition to all of my other belongings), but this remote cave on a cliff overlooking the Adriatic Sea seems like a good fit for me. Back to the music.
During the break, I got a few submissions and some good new tapes, so maybe I'll throw those out over the next few weeks. Maybe I'll just dig up another forgotten band from 85 years ago. I don't really know. Today, I'm bringing you a submission from my friend, Alex Turner, who you may have seen working behind the merch table at a SHARKPACT show or you may have seen him setting up the lighting for the recent BEYONCE shit-show in SF. Here he is to tell you what little information is known about the legendary, short-lived band SOCKS & SANDALS.

SOCKS & SANDALS was a mysterious group with obvious 90210 influences. Little is known about this (self-described) very influential Olympia band. The members have split up between Olympia and New Orleans. They can be seen playing in THE CHAIN, CHIN UP MERIWETHER, RVIVR, SHARKPACT and ROCK BOTTOM GIRLS.

Posted by Harvester at 11:56 AM No comments: