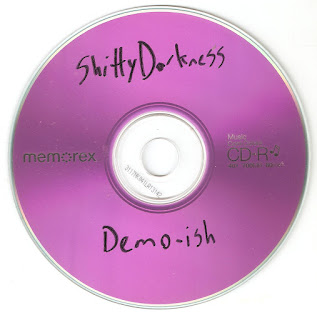 These stupid little CD-R's are not built to last and I found this one rolling around in the bottom of a filing cabinet, all scratched up but still playing perfectly. SHITTY DARKNESS barely caused a blip during a brief tenure in their hometown of Athens, GA, serving as a pit stop between the bands CARRIE NATIONS and WADE BOGGS. Ian wrote these songs after (and during) the demise of CARRIE NATIONS and brought them to his new band PILLOWFORT, which maybe kinda morphed into SHITTY DARKNESS. They recorded this demo and then (I think) Ian broke the band up, only to have all (or most) of these songs reappear as WADE BOGGS songs a short time later.
But if we get past hazy facts and just get into emotion, these songs are sooo catchy in their raw pop presentation. It reminds me of why I (and you) was up front at CARRIE NATIONS shows, screaming the words on the verge of tears. Put these songs on your stupid digital device, walk to the top of the tallest hill in your town while listening and see if you're not walking faster and feeling like a wet hundred dollar bill once "Senior Citizen" hits your ears. (If you don't have hills in your town, just walk downtown and glare at people until someone tells you to go away. If you don't have a downtown, walk into the field and scream these songs until your voice goes hoarse, even if you don't know the words). After all that, walk yourself over to Athens, GA and ask Ian what songs he's writing now. If he comes up empty handed, tell him the world needs his music now and always. (it's true, Ian.)

If you need more music by this guy (you do), he was also one of the responsible parties for WELCOME HOME, NEMO. 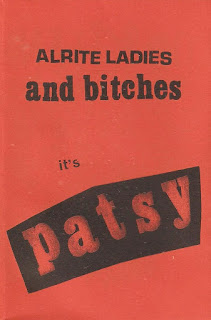 There is a certain power in the simple punk riff when executed correctly, but it's up to the listener to decide what constitutes "correct", "simple" or even "punk". For me, I think of KLEENEX's "Hitch-Hike", DRILLER KILLERS "Malibu is Burning" or even BEAT HAPPENING's "Bewitched". Those are snapshots of my ideal of perfection. Simplicity. No overthinking. Direct and damaging, while maybe not intending it that way.
PATSY, from New Orleans, gives me that same feeling when they hit the first notes of "Tuley 'Tude High". The tiny yelp just as the drums kick it clinch it for me. It's fun and fucked and dizzying, the way you (I) always want punk to be but so rarely is. I'm stoked on it, but not surprised since the same people responsible for these songs are also (partially) responsible for MYSTIC INANE, FOREIGN BODIES, DISPLEASURE, SPECIAL INTEREST and a lot more.
Every song sounds like a total pogo bounce, fun-ass party. A great escape for these grim times.

They put out a couple of 7"s. They're really good too.
Their Bandcamp page. (I truly did not know that they cover the above KLEENEX song until I found this link. Whoa....) 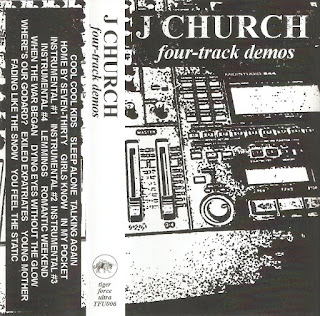 Years ago, I posted a link on the blog to this tape on another site, but now it's not available, so I'm reposting it here. This is a collection of Lance Hahn's (r.i.p.) four track demos for J CHURCH songs that he was making before he passed away. J CHURCH was probably one of the most prolific pop-punk bands of all time, Just a cursory glance at their Discogs page tells me that they might have released 18 albums and over 50 ep's. I can't even begin to explain the impact that Lance and J CHURCH made on the world of DIY punk that will last until the end of time. I only hung out with the guy a few times and I still think about him when I walk the streets of my neighborhood, where he lived in the 90's. Every single time it rains and I'm on Mission Street, I get "November" stuck in my head...for days. That is an impact.
This tape has some fully formed songs, some sketches of ideas, some instrumentals and some misfires. I read somewhere that Lance treated his four track like a notebook; a place to write down his ideas as they came to him and that's how I approach this tape. It's perfect in its imperfection. If you've never heard J CHURCH, maybe you should start somewhere else, but this is also a warm, inviting place to be.

More information about this tape here
You can still order a physical copy of the tape here. .
Posted by Harvester at 3:50 PM 1 comment: