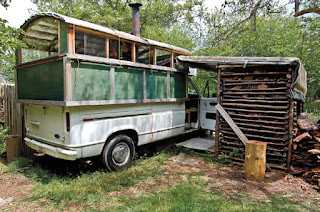 I'm going on tour for the month of November, but will dig into a backlog of old tapes when I get back...new ones too. If you want to see my band on tour, you can find the dates right here. Take care
Posted by Harvester at 4:12 PM 3 comments: 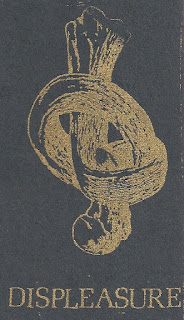 Some bands appear pissed off but you can tell that it's a charade; a cheap smokescreen concocted by the members to make you feel a certain anger or fall into line doing an angry dance. It feels like a lie and you can tell it doesn't come from the heart. You might feel cheated. With Oakland's DISPLEASURE, it feels real. They cast bad vibes a mile wide. It's uncomfortable. When I listen to them on headphones, it makes me feel like I can glare holes through the pointy fucking heads of the tech employees who populate my neighborhood and make it harder for everyone else here to live. Their music is dirty, fucked up, angry, desperate and punk as fuck. It sounds like waking up in the morning next to a pile of dog shit and not having anything in your fridge besides half of a flat 40, some broken glass and a cracked egg. This is one of the many reasons that it pains me to say that they have broken up. 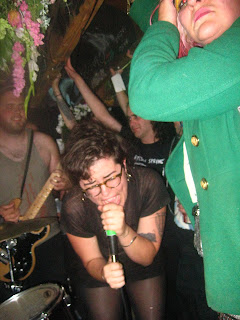 All photos from DISPLEASURE's last show by me. 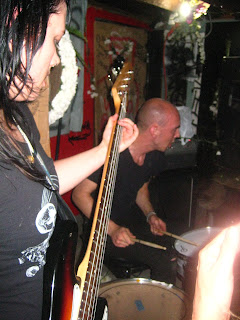 I saw them play in basements, warehouses and the store at Gilman Street. I even sang extra vocals with them once on an AREA 51 song. I never saw them play a bad show. There's a lot to hate in this world these days and DISPLEASURE made me comfortable when I allowed myself to feel all of those feelings. It was therapeutic and cleansing.
At their last show singer, Emmalee passed out and read a eulogy of sorts for the band as they launched into the first song in a basement in Oakland, fittingly filled with hundreds of dead flowers. Twenty dizzying minutes later, it was all over and everyone yelled for them to not quit...ever. But it was too late, their guitarist, Nathan moved far away and the band went their separate ways. You're only left with this little tape (and their first tape too), so get into it. 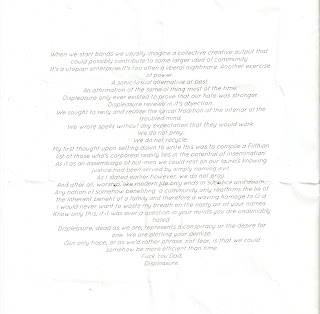 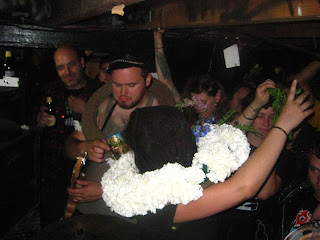 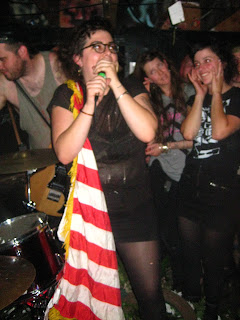 (E.R. had just ripped apart the flag with her teeth)

Members have also spent time in RED THREAD, FOREIGN BODIES, FLORAL BEEF, NEON PISS and many more. If you'd like to get this tape for yourself, do not hesitate to order it from  Cut Up Tapes
Thanks to DISPLEASURE for sending me their digital files of this recording.
No thanks to DISPLEASURE for breaking up.
Posted by Harvester at 2:29 AM 1 comment:

The Five Best Punk Videos I Can Think Of At 6 AM After Being Awake For 23 Hours.

(I seriously can't watch this without getting tears in my eyes because they are so fucking good.)

Email ThisBlogThis!Share to TwitterShare to FacebookShare to Pinterest
Labels: Punk 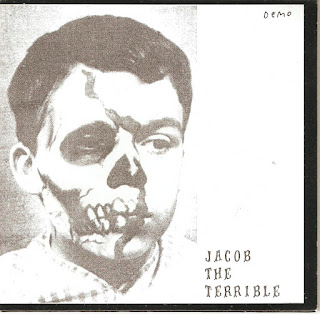 Okay, I admit, it's been a while since I updated this but that's not because I've been burned out or lazy. On the contrary...I worked 14 days in a row at my job while simultaneously practicing with my band, helping to put out a tape, booking a US tour, getting together t-shirt designs, trying half-assedly to find a subletter, buying a bike and celebrating another year of being alive on this weird rock we call Earth. I also spent a week in Worcester, MA, visiting some good friends and getting some much needed time to relax, read and drink coffee.
While out east, I was lucky enough to roadie for one of my favorite bands, THE TERRIBLES and got to see a punk show in a state where I had never seen such a thing....New Hampshire. It was weird. It was in a martini bar. I also ate the worst taco I've ever eaten in my life. When the band got to their show in Providence, they morphed into one of their few alter egos, JACOB THE TERRIBLE. You see, the band has a long time friend named Jacob Berendes, who has been performing solo for years (You can order one of his CDs here) and also publishes the monthly newspaper, Mother's News. In addition to this, he runs a distro called Chipsylvania and formerly manned the massively missed mission, Fujichia. Anyhow, Jacob wrote many songs that should be (and still could be) classics, but haven't had much of a life to speak of outside of the greater New England area. At some point, he (or perhaps they) decided to turn his formerly quiet songs into full-on rock songs, using THE TERRIBLES as his backing band. Thus, JACOB THE TERRIBLE was born. This shoddy and hastily recorded demo is not quite the representation that the band had in mind when they went down to the basement with the four track, but this is what they got when they emerged a few short hours later. I think the true strength of this band lies in their live performance because Jacob is a front person to end all front people and the TERRIBLES are just a great fucking band.
Take the Providence show for example...They were slated to play second, just after the smooth indie-garage rock stylings of some hacks with half of JTT's energy or charisma. Instead of discussing the lineup with JTT and talking about how they didn't want to play first, the boring indie rockers just did that thing where they simply disappear and make everyone's lives a little more difficult by not being available (emotionally or otherwise) when it is time for them to play. Berendes and THE TERRIBLES are no strangers to chaos and are well aware that the show must go on. They set up and started the proceedings with no temper tantrums or complaints (the rockers not-so-mysteriously re-appeared just as the band was gearing up for their first song). By the time Jacob yelled "The world can be so fucked!! But there's only so much shit you can shit....ON A FACE!!!", the audience was sold. The next half-hour was filled with wildly flailing, dancing bodies and impassioned sing-a-longs. Simply, they killed it. I briefly peeked in later when the indie rockers were playing their coveted time slot and the crowd was barely managing to stay awake (I know that this isn't a competition but when a band can't manage to do the simple thing they are expected to do on tour [i.e. play the show when asked, interact with the other people involved, not be unavailable], I have little-to-no sympathy for them). 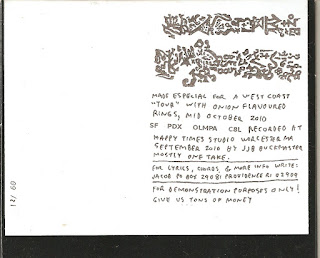 Since recording this, JACOB THE TERRIBLE has re-recorded some of these songs at Machines With Magnets and the new versions sound a billion times better. They are currently looking for someone to release it (like, say, Corleone Records) and I, for one, would greatly appreciate it's existence in this world.
When not being in this band, drummer Matt Carroll takes amazing photographs, greatly analyzes seemingly pedestrian endeavors and performs dramatic readings of Victorian-era erotica while dressed in period clothing. Guitarist Jamie Buckmaster enjoys a charmingly bizarre sleep schedule (others might call it insomnia), works on beautiful art and almost effortlessly plays any instrument at an expert level. Mike Leslie, the bass player, skates better than you, works tirelessly on meticulous art and is one of the better people that I am lucky to know in this world. After downloading this, be sure to also listen to THE TERRIBLES and then smack yourself for not having them in your lives for the past 15 years. 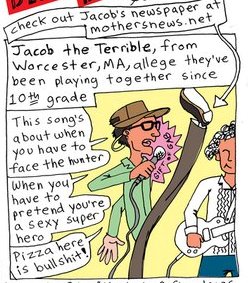 Taken from a comic by John Isaacson
Posted by Harvester at 10:55 AM 2 comments: 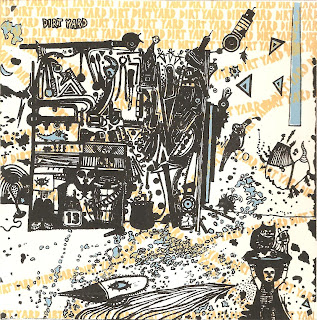 You know how you watch a band sometimes and the members look really intense and scary in this way that makes you not really want to talk to them afterwards? Then, when you actually DO talk to them, you just realize that they were in a remote region of their mind, releasing tension, releasing anger and zoning out completely on the thing that they love to do. The thing about DIRT YARD is that their singer, James always seemed to be in that zone, teetering between the edge of all-consuming anger and a pleasant detachment that makes for an entertaining front-person in a band. The rest of the band backs him up with a chaotic, noisy, straightforward-yet-jerky wall of punk. Angry, defiant, sometimes confusing, moody, dark and fucked. Their song, "Drugs" actually sorta makes me feel like what I think it would feel like to be on drugs (Who knows? I stay away from that stuff.)

The band also put out a 7", but I have no idea of how to get it now. If you're ever in Minneapolis, I'm sure you can ask someone at the Seward Cafe, Hard Times or Modern Times and they can probably help you out. Stella, the guitarist of this band was also in IMPRACTICAL COCKPIT and now is a proud mother of a beautiful child. Ski, the drummer, is the dad of that child and currently plays drums for FROZEN TEENS. What are James and Peat up to? I haven't the foggiest notion. 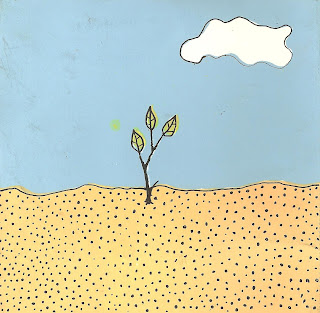 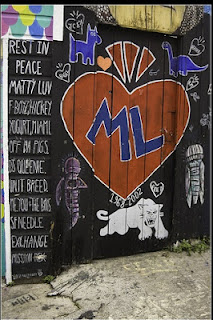 One of the last times I saw Matty Luv, I was in a van driving down Capp Street with my bandmates. He raised his fist to us in solidarity as we were about to go play in the middle of an illegal anti-war parade. Later, our band played in the middle of Mission Street on the back of a flatbed trailer and we stopped the parade right in front of Mission Records. The punk kids came out front to watch us and Matty took a break from working the door at the punk show to grace us with his smile. Later, i went back and tried to hang out with him for a little bit, but he was distant and preoccupied. Ironically, a bunch of us went to the park and gave each other hickeys. Meanwhile, Matty's life slipped away a few short blocks from us and we never saw him alive again. That was ten years ago today. I would be a liar if I told you that his impact wasn't still felt to this day, musically and aesthetically. I don't want to give a fucking eulogy. Just listen to this music and enjoy it. Keep living you lives and take care of the ones you love. 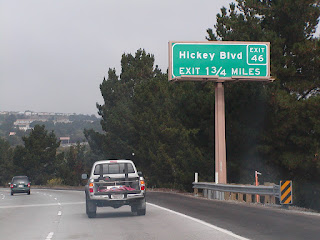