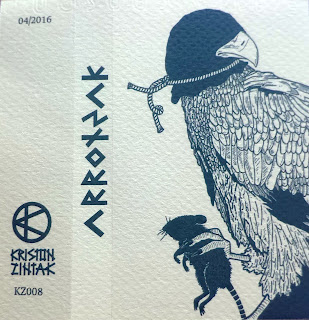 Upon arriving for our last show of tour in Zarautz in the Basque Country a couple of weeks ago, our band was tired, kinda sick and frazzled. After playing close to 30 something shows, mostly in a row with only 2 days off, it's a little hard to feel excited about another punk show.....but we were and the Basque punks did not disappoint. Our host Juanma told us that the venue would have dinner ready for us in a few minutes, but if we ate then, we would miss the first band and something about his tone helped convince me that we would be making a huge mistake by doing that. (sidenote for punks from the states: If you've never toured Europe, every venue, every squat feeds you dinner before your show and this simple act makes such a huge difference in the day to day brain decay of tour. The US could learn a thing or 5 from punks there) So, we held off on dinner and I'm glad we did. When ARROTZAK played their first song, something was off. It didn't feel right. I was starting to doubt Juanma, but the members of the band adjusted the amps, moved a drum or two and -- BAM -- way better! They played the kind of punk that I'm sick of describing...the kind of punk that you can't make sound good on paper (or a screen) but still sounds so good when it's done right in front of you. Melodic and gutsy and wonderful.
When they finished their set, our band ran upstairs to scarf our food and get back into the show before MANAGAITZ played their first song, who were also great.
This ARROTZAK tape is a couple of years old and features a different singer (and maybe even a different drummer). The live set was better, even though this tape is great but I hope they record some newer stuff soon. 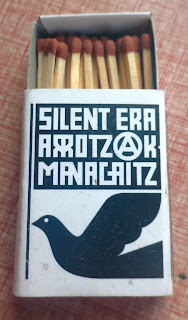 Yes, someone made matchbooks for our show.
Posted by Harvester at 8:19 PM 3 comments: 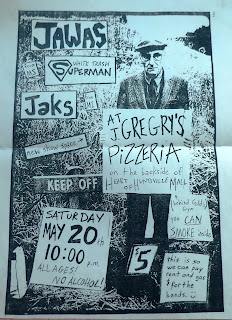 Just how many times can one write about a forgotten band from the 90's and still pass themselves off as a sane individual? I gave up on passing myself off as that at least 20 years ago, so who cares? Recently, my old friend Jack unearthed this recording and digitized it to share with me. He said that the tape just had "Marsh" written on it in sharpie (Marsh played guitar in WTS). Jack thinks that this tape was mailed to him by the band when they were trying to get shows in Alabama back in the early 90's. When I played the first song, I immediately recognized it as "Clock" off of the band's self-released cassette from 1994, but it sounded different. I soon realized that it was maybe a demo version and then I got goddamn giddy as fuck when I found that this version didn't fade out like the "official" version and went on for another 2 minutes and included an extended chorus!! No really, I was jumping up and down in my room like a teenager when they did the extended chorus. It was so ridiculous that I laughed at myself.
Next up is "Wheaties" from their two song 7" and I'm pretty sure it's the same version. After that is the unfuckwithable "Couldn't If I Tried", which contains the exact same musical track with a slightly different vocal take. It doesn't diminish from the greatness of this song at all. Many well respected punks-of-a-certain-era of the 90's have named this song as the best punk song from the 90's and I will not dispute that. The tape ends with "Can Man", which has an almost identical bass line as "Wheaties" and I've never understood that. I think this might be a slightly different take than the "official" version but I can't really tell.
I understand that I didn't tell you anything about what they sound like, but I've just talked about this band a lot and I love them and I'll let you figure out the details. You can read more about them here.

I have not been updating the blog much in the last year, but I intend to change that. I just went on tour throughout Europe and talking to people in person in places like Greece, Basque Country, Serbia and Poland (among many other locales) helped me remember what a large impact music has on people's lives. People had really thoughtful and interesting things to say about the music on here.  Knowing that someone far, far away from me is listening to my friend's band from 1994 who didn't have the resources to make more than 10 tapes is a really incredible thing.
And as long as I'm here, I wrote a zine about the 1979 Portland punk band Ice 9, which includes interviews with 2 members of the band. You can order it directly from me at Remote Outposts.

Thanks to the people who continue to support this blog, near and far. I hope you're still finding things that you enjoy. And I hope White Trash Superman doesn't take me to the people's court.