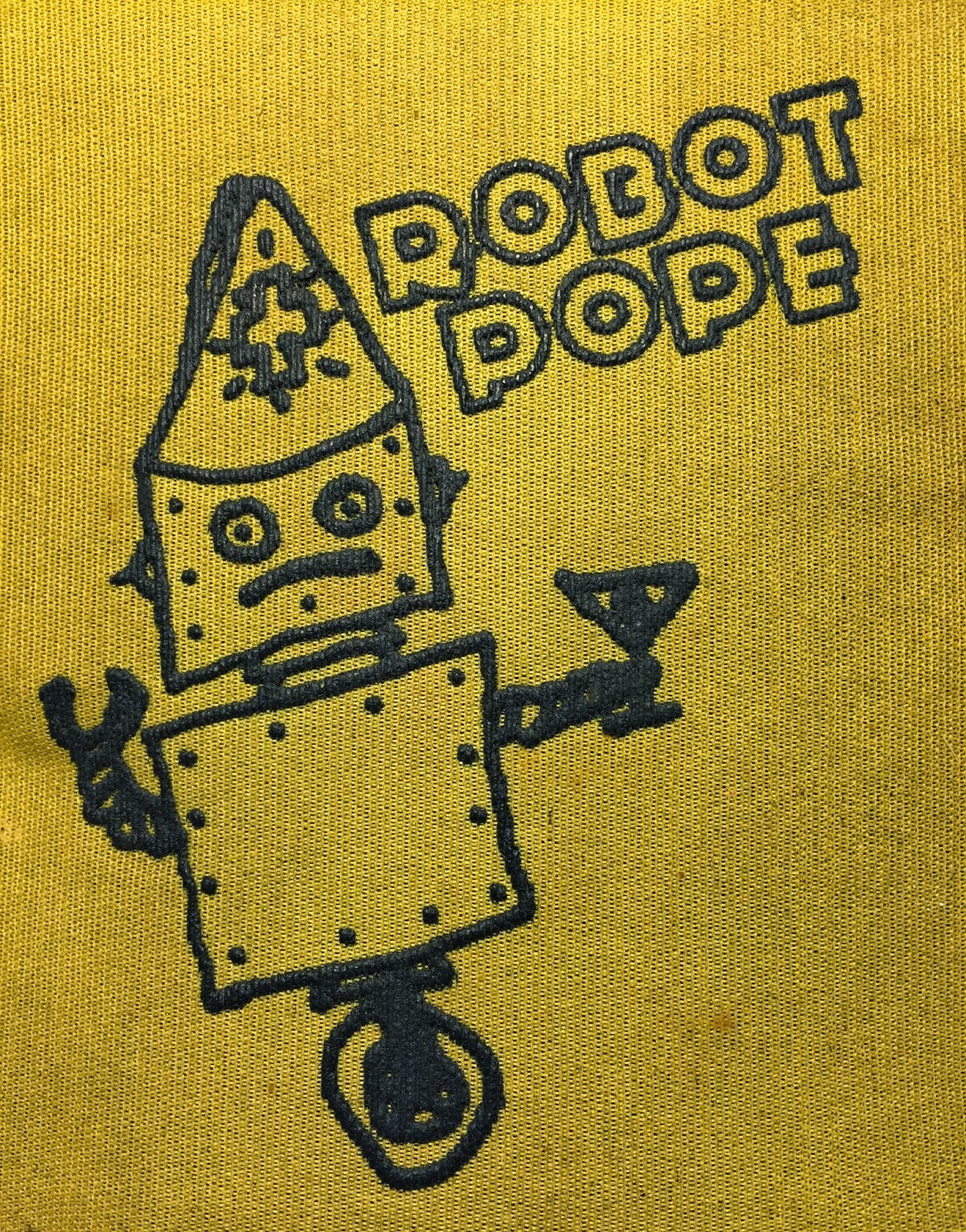 The other night in my room, a compilation of bands was playing on my stereo. Most of them were good, but when ROBOT POPE came on, I put my pen down and just stared at the receiver. I forgot just how good they were, mostly because I never got a copy of their tape and didn't live in Chattanooga (their home / my former one) anymore when they were an active band. Since we now live in the future, I sent a few quick texts and found all of the ROBOT POPE songs in my inbox within ten minutes.
First off, whoa, this recording is rough, but I think the band's excellence shines through. The band consisted of Cousin Scott on bass, Bill (FUTURE VIRGINS, GIANT BAGS OF WEED and many more) on guitar and vocals, Daniel (ADD/C, BRIS and much more) on drums and Laura on vocals. According to mixed reports, all of this was recorded in a little studio on MLK in Chattanooga above JJ's bar, using a lot of the same gear that was used to record the ADD/C LP Keepin It Real....meaning a big Tascam mixer and a reel-to-reel 8 track. Even though this is recorded in a "studio", why does the guitar sound like that? Laura wanted her vocals to be almost inaudible because she was so nervous about singing for a band, but as you can see, there's absolutely no reason for that fear because she's a talented and extremely capable singer (see "Mortal Medicine" for indisputable proof).
The band name comes from an inside joke from an ADD/C tour. Daniel was reading "an okay book, not a great book" (his words) called Project Pope by Clifford D Simak. His bandmates, Grady and Cole kept referring to it as "Robot Pope", based on the cover illustration and it became a running joke in the band to point out Daniel's "affliction for science fiction". When it came time to name this band, Daniel suggested ROBOT POPE as a way to neutralize the joke..and it stands alone as a pretty good band name anyhow. 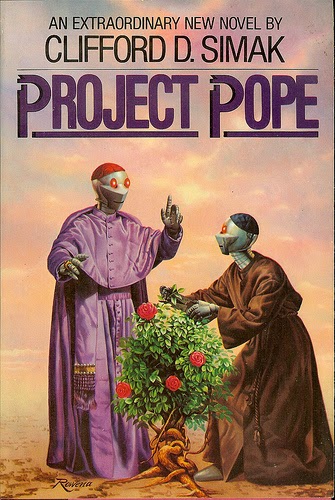 Thanks to Daniel for sending over the tracks and providing info.
Thanks to Robbie and Shannon for extra info.
Thanks to Laura for being okay with this going online.
Scott and Laura live in Chattanooga and keep it real.
Daniel is in Berkeley and moves bacteria around on petri dishes, among many other things.
Bill is walking around with some cows in India.
Posted by Harvester at 12:35 PM 1 comment: 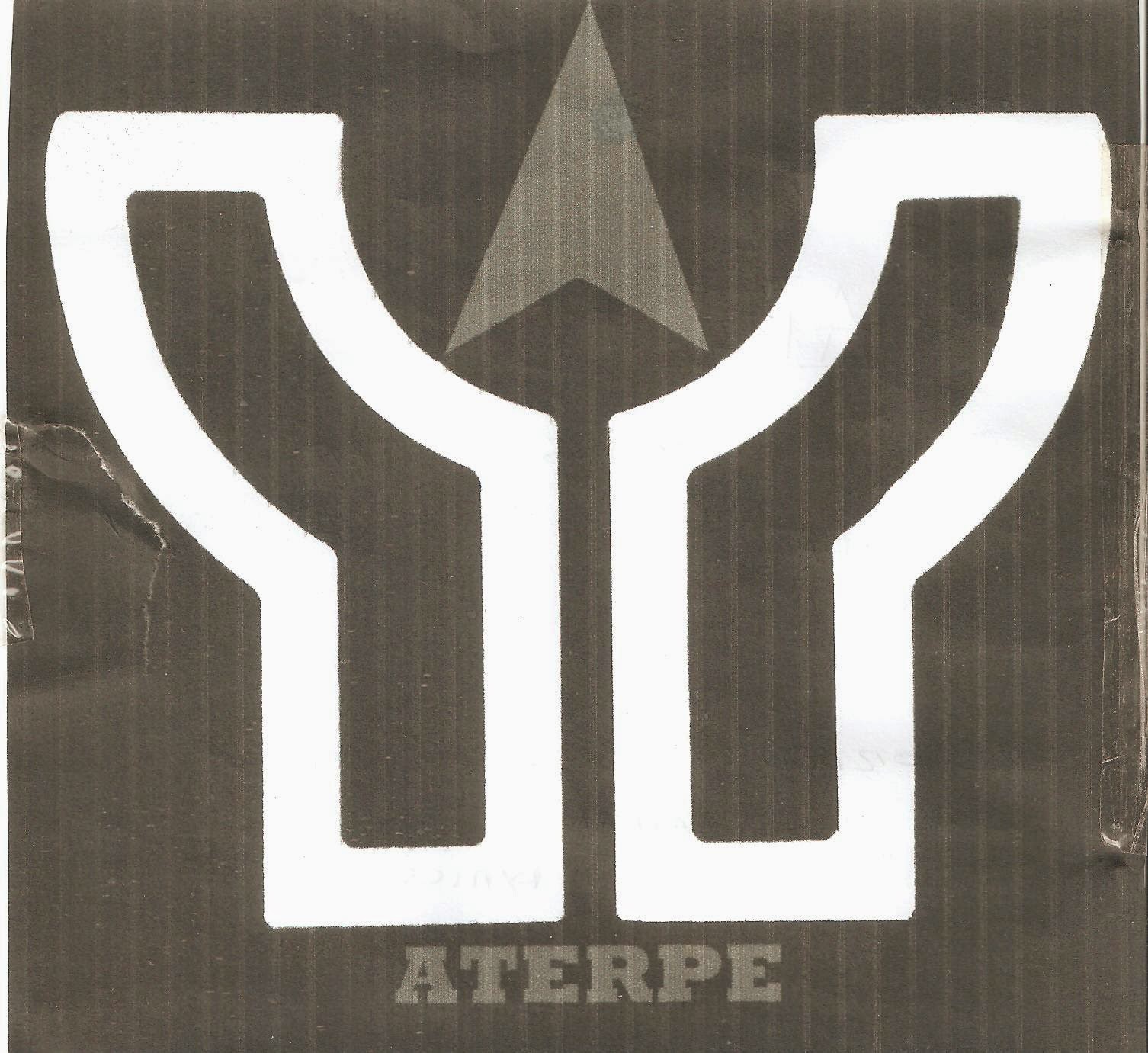 I think when I first heard this, I described it as "grindcore", a sub-genre I know almost nothing about. Now, I don't know what to call it. It has elements of grindcore, but it's also kind of catchy (I swear one of the guitar hooks could be easily translated to a pop-punk song). It's also just fucking weird. The singer sounds like he recorded his part without even considering the rest of the band...like he was in another room...or another counbtry..or another world. Honestly, it almost sounds like he recorded them over the phone in an echo chamber. Add in the fact that the singer recorded the vocals in the ancestral language of the Basque people, Euskara and I am throroughly confused. Did I mention that this band is from Thailand? No. Did I mention that I kinda love this? I do. 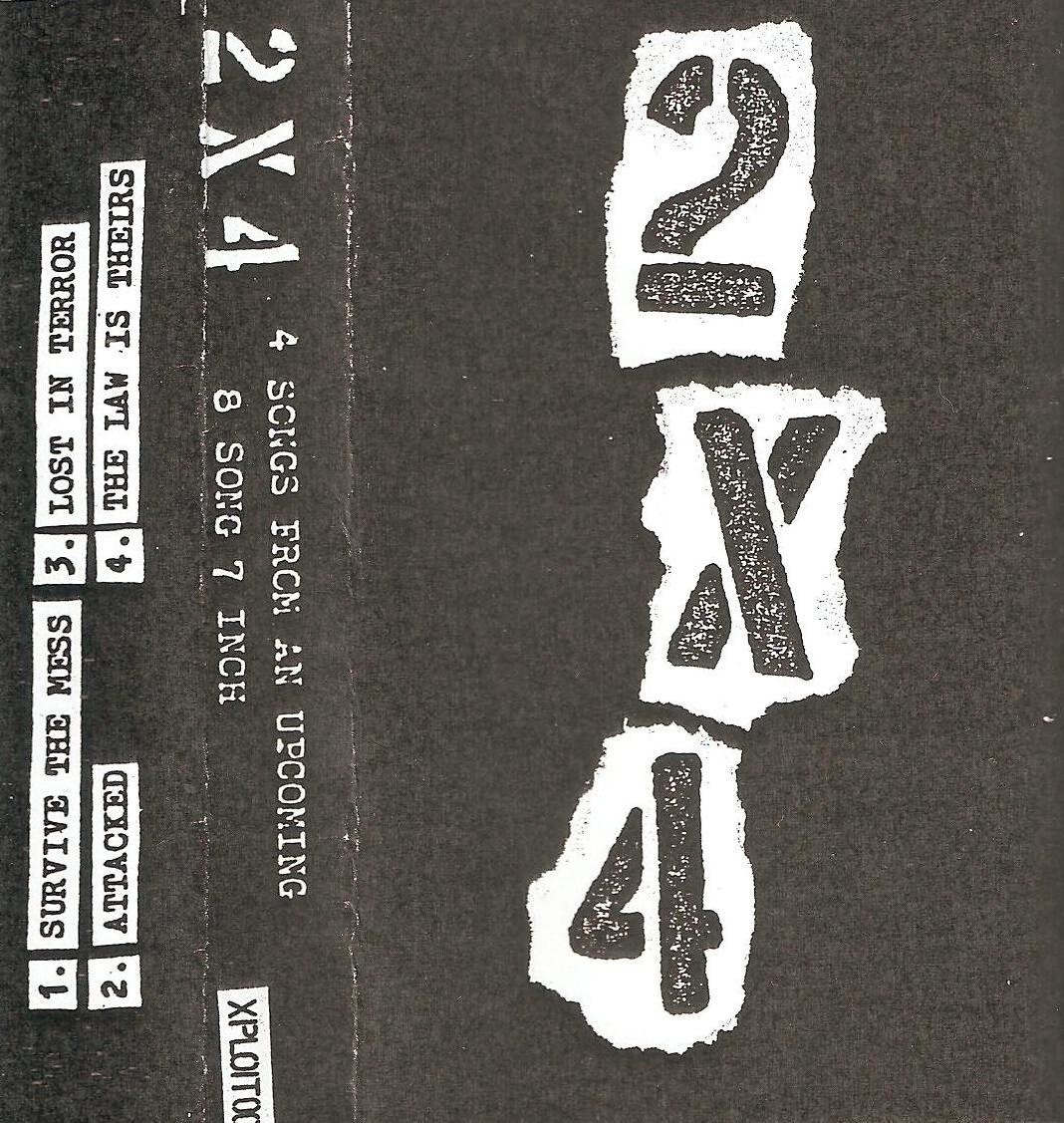 So, this tape will sail right by the folks who look here to find the lowest fidelity melodic punk on the internet and that's their loss. 2X4 is from Boston. They play hardcore. No hyphens. No bullshit. It's what is blasting out of the back door of my room right now to annoy my neighbors. Fuck everything.

"Society's a mess
Survive the mess
It's yours to deal with too"
Posted by Harvester at 12:01 PM No comments: 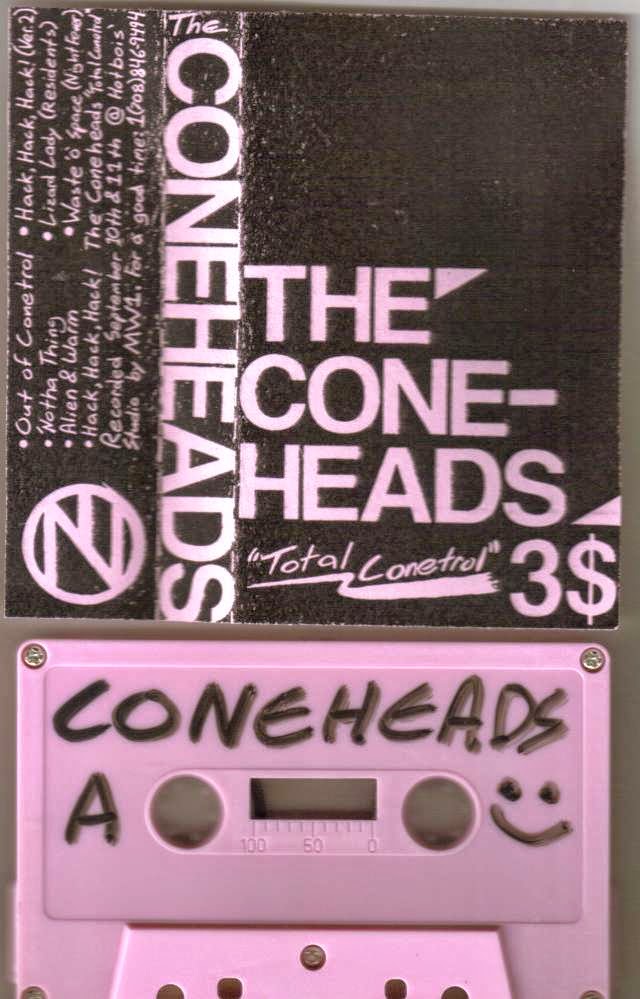 Yesterday, I decided to take a trip over to Oakland to check out a record swap before meeting up with some old friends who I haven't seen in a while. Five seconds after I walked in to the backyard of the fucking fancy pizza place that was hosting the swap, I wanted to be anywhere else in the world. A lot of Oakland residents love to talk shit on San Francisco and all I could think was "Is this what you want, Oakland?" There was a sea of gelled-ass hair and cologne-soaked shits shopping at natural wood boutiques full of organic soaps or some fucking shit. There was also the usual people I see at the swaps doing their thing, but I couldn't block out the bullshit around me long enough to look at overpriced hardcore LP's. I walked outside and just laid down on the sidewalk. I had what can only be described as "a moment". As the Saturday shoppers walked around me, I just laid on a side street of Telegraph and listened to the whole CONEHEADS tape. When it ended, I got up, slammed some coffee and got the fuck out of that part of town...went up in the Berkeley hills into some nature with my friends...In the moments when I wasn't hanging out with people (on the train, walking between houses, on the train again, going to the store), this tape was blasting into my ears. It's possible that I listened to it 10-12 times yesterday.
THE CONEHEADS are from Indiana. When I lived in Indiana, I didn't know of any good current bands in the entire state besides the ones who lived in the same town as me. Granted, the people in this band (and all of their friend's bands) were probably 8 years old when I lived there. I'm glad that there's great, exciting punk coming from those places now. They sound like DOW JONES AND THE INDUSTRIALS on speed or a more manic DEVO. I was so happy to hear a RESIDENTS cover, because they're one of my favorites, but I always wish punks would cover their songs rather than say, PRIMUS. There's a buncha fuckin nerds who know way more about the Northwestern Indiana punk scene than I do, but I'm pretty sure these guys come from the same amorphous gene pool that spawned bands like BIG ZIT and OOZE. I like those bands just fine, but this tape is entirely infectious and habit forming.

It's very, very rare that I ever post a tape if I don't own a physical copy of it, but I made an exception for this one because it's so good. I swiped these tracks and pic from Suds Denim, one of the few music blogs I pay attention to. If you know where I can get a copy of this tape (preferrably from the band), please get in touch and I'll send my hard earned cash to them.
Posted by Harvester at 9:32 AM 7 comments: 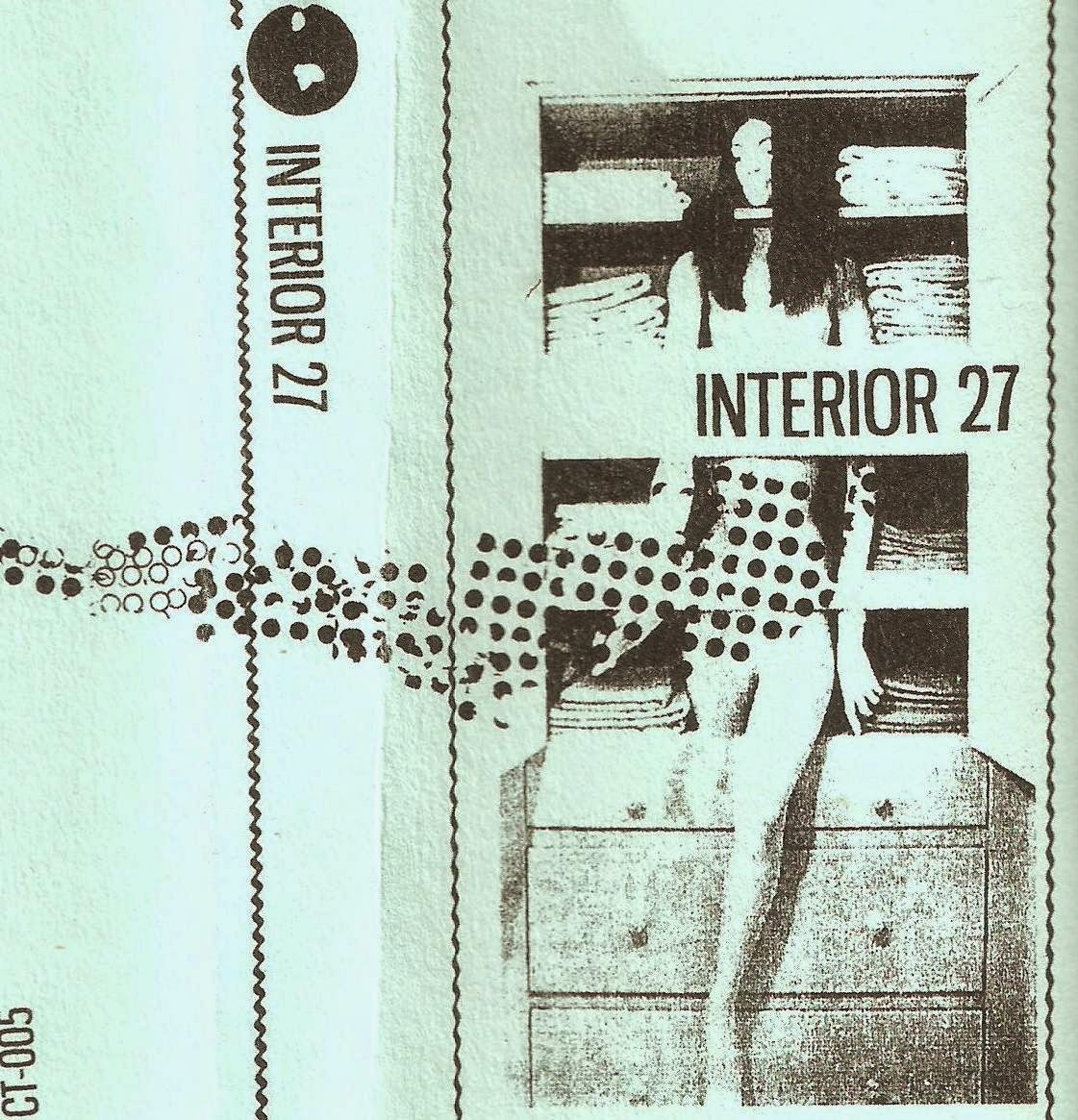 It's rumored that INTERIOR 27 practiced for a full year before they ever played their first show. They went through a bunch of changes before they ever hit the stage. Diane played drums. KTW played bass. Zoe played guitar. Diane moved to guitar. I played drums (for a day). KTB played drums. Diane sang. Laura played drums (?). Diane moved back to drums. Laura moved to vocals. Zoe and KTW did what they did and held it down through the chaos.
When they finally played their first show, they already sounded confident and comfortable throughout their 12 minute set. That was at the beginning of this past summer. A couple of weeks ago, I watched them open up a show for RAKTA and MANE and it was the best I had ever seen them...which kind of sucked since the following day, they played their last show ever. (Sidenote: The RAKTA/MANE/INTERIOR 27 show consisted of all-female bands. The soundperson and door person were also women. I just wanted to point out how fucking nice it was to go to a show and not have some fucking dudes yelling at me for 3 hours). The best bands are usually the ones who don't stick around long enough, who only give you a few good songs to remember them by. Be sure to appreciate those bands while they are active and let them know that they made a difference in your life.

I read some other stuff about the band online and they were compared to bands that were so off the mark that 'I wondered if I even shared the same planet with the author. So, I decided to refrain from telling you anything about what the band sounds like. They are good. I love them. 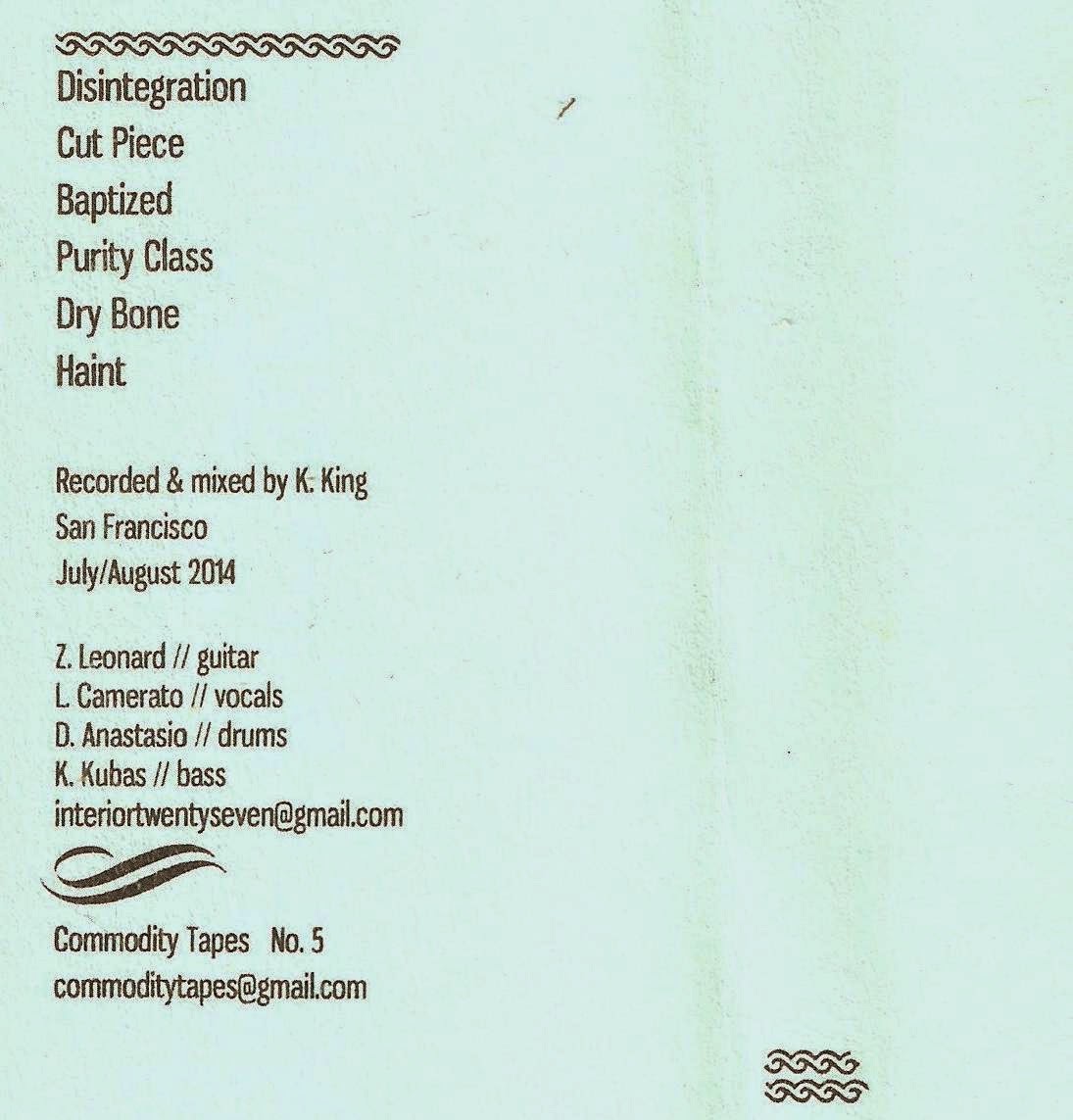 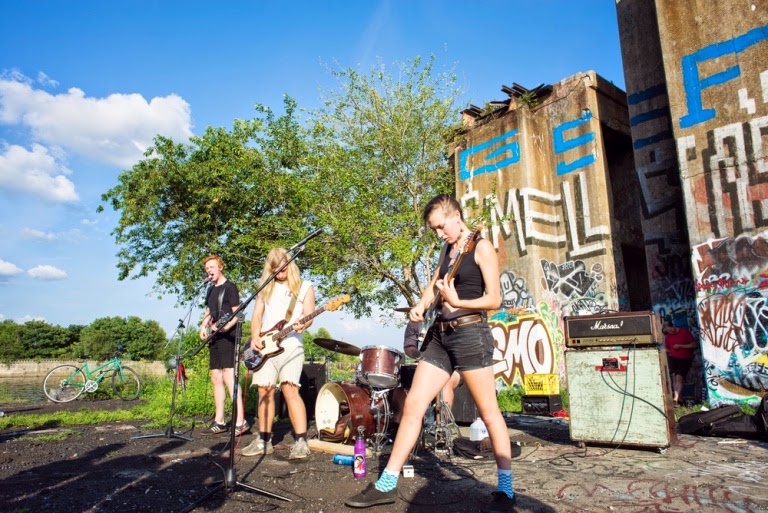 This week on MRR Radio, I hosted the show with Lyds. Since we were recording on Halloween, half the show is Halloween themed. The other half is all newer stuff.  I think it turned out pretty good. CONEHEADS are still encouraged to send me a copy of their tape or tell me how to order it.


Go to MRR Radio
Posted by Harvester at 10:59 AM No comments: