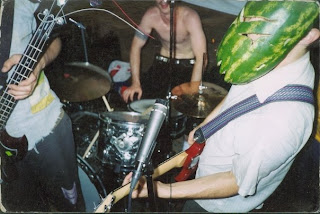 I remember playing a show with CARRIE NATIONS at a house in Athens, GA some years back and thinking "yeah, they're pretty okay". Then, by the next time I saw them, it seemed like they had turned their Badass Meter up to 10. They were playing the songs from their LP "Be Still" 100 times faster and tighter than they had recorded it and they had a handful of new songs that were even better. I had the pleasure of going on tour with these fine young gentlemen a couple of times and I watched them every single night of tour, up front, singing along and sharing the mic. The one night I tried to NOT watch them was when they played Plan-It-X Fest to 600 people in an old theater in downtown Bloomington. Everyone else running the show wanted to see them so I agreed to work the door since I would see them every other night. During a lull in activity, I walked into the theater to see how they were doing and the entire fucking theater was singing along with my favorite line of theirs..."I KNOW I CAN NEVER DIE!!". 600 people! I backed out of the theater doors with tears welling in my eyes. I can't really explain it, but it was just too much for me to take. At that moment, they were the best band in the world...completely untouchable. The next day, I watched them play to 20 people in a living room in Ann Arbor and they still played as if there were 600 people there. The day after the tour ended, I sat in my room missing them and listening to their record over and over.
CARRIE NATIONS were super serious about the music they were creating but had this way of making you think that they were joking around the whole time. They weren't. Sure, they would tell inside jokes between songs and confuse kids at the show but afterwards they would let people in on their jokes, share their beers and make sure everyone was happy.
A short time later, I lived in a house with most of the band and they were on the verge of breaking up for various reasons. I told them they really needed to record their new songs, but it was obvious that it just wasn't happening. I think a few things got recorded, but nothing ever got finished. It was a sad time and it was hard to watch the band break up.. All that is left over (that I know of) is this live set from late 2004. They played a show at the 40 Watt in downtown Athens, GA and rolled out a bunch of their new songs. Luckily, someone was recording it off the board and now we have this decent live recording to remember them by.

EDIT 11/21/11: This file is now an mp3 file as opposed to an .ogg file. Thanks to Rurnt for the tip and the help!
Enjoy this one 30 minute track with no editing, no song titles and plenty of dead air and banter. Great sound quality! 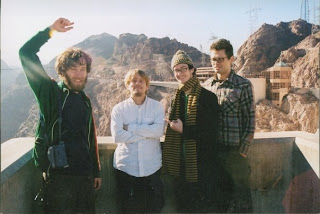 Top picture by ??? at Matt Tobey's graduation party in Michigan. This pic by Kristen at the Hoover Dam.
Posted by Harvester at 8:17 PM

Check out the free program Switch. It allows really easy format conversion. Also, here's a link to an mp3 I made of your post using Switch.
http://www.mediafire.com/?hcm4x5rywcqhqnl

i miss that band so much! touring with them too. thanks greg for having such a good memory and writing that down and of course sharing the music. xoxoxo

This was recorded off the sound board at the 40 Watt by Asa Leffer, Forest's brother and the lead sound engineer for the 40 Watt. I believe this was opening for Jucifer on Amber's birthday, they played her birthday with them almost every year for 3 or four years in a row. ryan