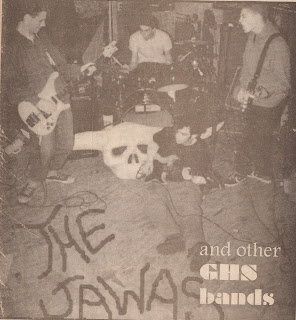 THE JAWAS came into my life to spit out 2 7"s and a compilation track. Then, they quietly vanished from the Huntsville punk scene. Besides being a great teenage punk band, the members of the JAWAS really helped me out a lot when I was 18 and living in a car. Their drummer Matt, let me sometimes sleep in the barn behind his parents house, which is also where they practiced (and is also where I photographed them for the cover of their 2nd 7"). Their bass player Andrew, would give me food at his parent's house when I ran out of money. I briefly played bass for their jokey metal band CRACKSAW at one show at the Tip-Top Cafe. Enough about me though. This is about them.
My old buddy Seth wrote this about their first 7" on his blog and I don't think I could do a better job...so here is what he said along with the cover art, drawn by Matt's brother (1st grade). 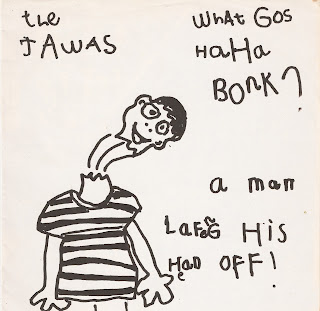 "The Jawas were very much an anomaly in Huntsville at the time. While everyone else stuck with 3 chord punk rock, The Jawas were sporting heavy metal influences, playing jangly weird chords and in retrospect were even a bit experimental considering the Huntsville scene was hardly one enriched with a great deal of variety. Oh, and people loved the shit out of them. A Jawas show was always packed. Drummer Matt Bakula (The Peeps, 3D's) was prone to wearing a giant bull skull with horns over his head while playing drums, shirtless, with a pentagram painted on his chest. The kids ate it up. This seems like it was one of the first releases on Huntsville's Nation of Kids! label in what I'm thinking was probably 1994. I was in the 11th grade, and it seemed like every punk inclined teenager I knew was rocking this shit in their car on the way to school. Bakula's little brother Patrick did the cover art who was then like 5 or something. He's all grown up now, had a band called Circuit Pop (who is brother drummed for), now plays in the Dastardly Do-Nothings, and makes me feel pretty fucking old.

As far as the tunes themselves, listening now, it's a little hard to describe. These guys were blending thrash metal ("Bionic Bitch") with hardcore punk ("Mocking U") and smoothing it all out with some catchy hooks that had everyone singing along. It's a little punk, a little metal, but definitely not punk-metal. But then, when I think of punk-metal, I think of like early Goo Goo Dolls and all that awful shit Roadrunner records was putting out in the late 80's. Some of the quieter, janglier moments have always reminded me of Sonic Youth or early Nirvana. Most of all, I think this record is a shining example of what can happen when a bunch of kids haven't yet learned the "rules" about playing music and writing songs yet - henceforth, they've got no blueprint to follow, nor do they have to try to hard to venture into left field. A lot of the ideas on here still sound brilliant to me. For example the extended drum stick interludes between parts in "Master Plan." It's great for the same reason a lot of these old punk records are great: It's unreasonably angry, paranoid and overtly nihilistic in that blissfully sheltered way that only high schoolers can be, but also pretty goofy at times and never forgets to be fun."
Thanks Seth...I just want to add that "Master Plan" is the perfect song that I wish I wrote as a teenager and "Mocking U" shows a maturity beyond their 16 years of age.

After that first 7", they appeared on the Nation Of Kids 7" compilation, which compiled the best Huntsville punk bands of that era (you can also find that comp on Seth's blog). Their song "Pointless" picks up where the first 7" left off and it made me think that the JAWAS were well on their way to becoming the best punk band in North Alabama (i know that seems laughably easy to an outsider, but Alabama had some majorly great shit going on in the mid-90's. 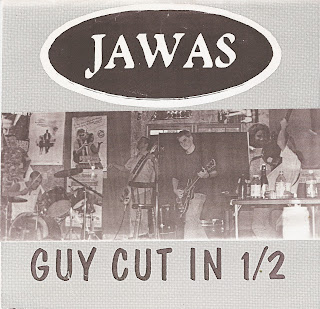 For their 2nd and final record, the boys took a serious turn in their songwriting direction and seemed to favor playing faster, sloppier punk. I still loved it, but it kinda seemed like they weren't even trying that hard. "Guy Cut in Half" and "Express Lane" are both solid as fuck, but the other two songs either seem like they were written on the spot (and the band hadn't really learned how to play it) or they are so mired in misogyny that it's ridiculous (which I chalk up to them being teenage boys and growing up in the south...that is not to excuse it).

Pretty soon after that record, the JAWAS called it a day and sailed on towards their 20th birthdays. Nowadays, Matt is playing in a few different musical projects like PINE HILL HAINTS, THE COUNTER CLOCKWISE and more. I believe their guitarist Mark is playing in a musical project with Matt. A quick internet search leads me to believe that singer/guitarist Donnie is happily married with kids. Andrew is still out there touring and recording, trying to top his teenage accomplishments with some band called AGAINST ME!
Download JAWAS
Download includes all of the record covers, inserts and even an interview with the band from the Virgil Grissom High School newspaper. Why do I have this?! I didn't go to their high school!!
Posted by Harvester at 3:36 AM