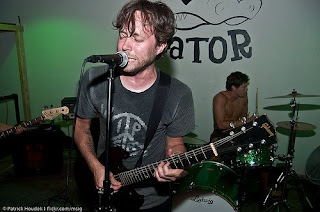 Photo by Patrick Houdek
So, this is different. Instead of trotting out a long forgotten tape or singing the praises of yet another Region Rock classic, I bring you the brand new album by Athens, GA's own WADE BOGGS! It just came out this week and I am excited to be bringing it to your ears. The band decided to do an experiment and not fuck around with record labels, pressings, even artwork....so I bring you just the music.
After the demise of CARRIE NATIONS, Ian (one singer/guitarist) forged ahead with the band PILLOWFORT, which morphed into SHITTY DARKNESS, which sort-of morphed into WADE BOGGS....or something like that..I can't keep up. What I'm trying to say is that Ian's got a bunch of music oozing out of his pores and he has been trying to find ways to give it all to the world in the forms mentioned above, as well as with HOT NEW MEXICANS and WELCOME HOME NEMO.
(Sidenote: I hate it when people write about bands and only discuss the people in the band who have visibly made the most obvious musical accomplishments. That being said, I don't really know the other guys in WADE BOGGS and I don't know what bands they have been in. I can say that I have seen this band and they rock the fuck out in a way that lets me know that they each put their hearts into what they do, which is way more important than the resume one has built up over the years.)
These fifteen songs are excellent and filled with pop hooks. I'm still letting it settle and I'm still forming my thoughts about it, but I can tell you that songs like "The New Catch" and "Sailor's Lament" instantly made me want to listen to this album all day. Stop reading this and just download it right now! Produced by lil' Patrick Jennings.
Download WADE BOGGS!
Thanks to WADE BOGGS for letting me put this on here.