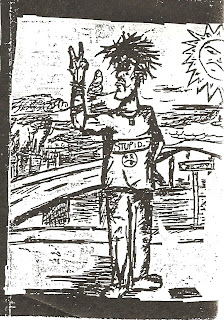 I helped to put out this CD in 1997 on the Nation Of Kids (hence "N.O.K.") label out of Huntsville,AL. It started off as a split CD between the band I was in, JOEY TAMPON AND THE TOXIC SHOCKS, and our friends, PINK COLLAR JOBS, from North Carolina. CD's were still a new novelty to us at the time and we weren't used to having so much time to work with, so there was a lot of it left over after our collection of songs. So, we decided to fill up the extra space with a sampler of current punk bands from the Huntsville area so that they could get more exposure when we took the CD on tour with us. 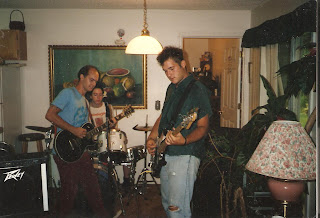 TOXIC SHOCKS playing an 8 year old's birthday party in St Mary's GA. 1995. No shit! Picture by Harry.
JOEY TAMPON AND THE TOXIC SHOCKS was a horribly moniker-ed band that I played in for 2-3 years with my friends Joey and Neil (both formerly of CHEESE ASS CHRIST). We had put out one 7" and toured extensively around the southeastern US at this point. Joey was getting kinda bored with the band at this time and it really shows on the recording. I mean, he wasn't a good guitarist or singer by any stretch of the imagination, but he usually made up for his lack of talent with an extra helping of vitriol, charisma, sarcasm and for lack of a better word, oomph. On this recording, it just wasn't really there. The first eight songs were recorded in a small little box of a studio, 20 miles from the town where we lived. (as a sidenote, I think this was the time that I was driving out to the studio to record and my car broke down, so I ditched it and hitchhiked the rest of the way...still made it on time.) The guy recording us did a really good job of making my bass drum sound like a cardboard box. The last three songs by us were recorded on a reel-to-reel four track in my bedroom on the corner of Dement and Ward in Huntsville. I guess it's easy for one to get upset or embarrassed about their old band, so just take a listen and judge for yourself. I still think our 7" is better. Soon after this CD came out, Joey told me "I don't have anything important to say anymore. I'm just gonna start a surf band." Then, we broke up. 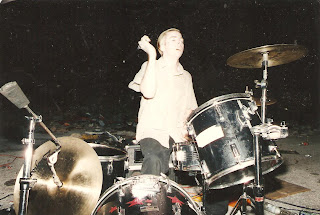 TOXIC SHOCKS playing a generator show on a boat launch in the Everglades. 1995. Photo by Kristiana. 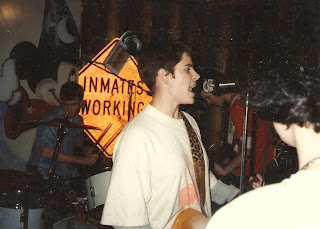 PINK COLLAR JOBS at the Jesus Saves Space in Boone NC. 1996. Photo by me.
PINK COLLAR JOBS, on the other hand, was on top of their game and kind of the polar opposite of us. Their songs covered political issues, feminism and monetary excess. They were our favorite band at that time and we were completely honored to put something out with them. They re-recorded most of the songs from their demo tape for this release and included a newer song as well, called "Society's Disease or Yours?". Joey was bummed that they didn't re-record the other remaining songs from their demo, so he included them on the CD. I'm not even sure if he asked them if it was okay.Oh well, they're great songs and this is the only more widely available stuff they put out besides their split 7" with RUSTWEILER. You should track that down as well so that you can see why PCJ was one of the best underrated bands of the 90's. 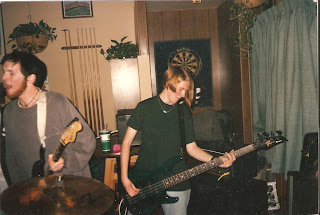 PCJ playing at Gorin's in Huntsville. 1997. Photo by Ramesh.
The compilation part of the CD starts off with a ridiculous intro by Joey and then kicks into two great songs by 565 BURNOUTS, who were also one of my favorites at that time. The songs were taken straight from their demo tape, which you can find right here, along with more info about them.
Next up is THE PEEPS, Huntsville's most loved (but unfortunately, not only) ska-punk band. They were around for a good number of years, but I only ever really liked their demo tape (which I don't have...if anyone wants to donate that for download, it would be appreciated). A LOT of people in Huntsville liked this band a whole bunch. If you don't believe me, someone actually made a full length documentary about them, which I have never seen and have no links for, Even though, I didn't like them much, they were always a fun live band and I played drums for them at two shows. Members went on to be in PROPERTY (see below), PINE HILL HAINTS, AGAINST ME! and ,uh, SOUL CRACKERS.
Following THE PEEPS is PROPERTY, who might have been the towns longest running punk band at the time besides RANDOM CONFLICT (see below). I think PROPERTY formed when most of the members were in high school and one of them was still in middle school. They always told me that they were just about to put out a record, but they never did. Besides this CD, they only appeared on some tapes and a comp 7". I think they were probably too busy chain-smoking and skating to get it together to release a record of their own. I loved them when they were around.
I've already told you about SHITBOY FROM OUTERSPACE before. This recording is from after their singer Joey (Tampon) either quit or got kicked out of the band and Jason (guitarist) became the sole songwriter. At this point, it seemed like he was just trying to push people's buttons with "edgy" topics. Thus, you get songs like "I Wanna Be Japanese" and "Brooke's Got DSL", which is not about the internet...and that' all I'm gonna say about that.
Next up is THE JAWAS with a song off of their 2nd 7". I'm not really sure what else I could possibly tell you about this band, since I already wrote a whole entry about them..I can tell you that even though we were putting together this CD at the same studio where they recorded their record, we still got their song for this comp straight off of their record instead of using their master tapes. Why? I don't fuckin' know. You can even hear that someone bumped into the record player within the first 30 seconds of the song. A huge disservice to a great band.
Following them is THE SLACKERS, who were defunct by this time, but these two songs were still laying around. THE SLACKERS were punk as fuck and one of my favorite live bands when they were having a good night. Both of these songs are great and you should expect to hear more about them on this blog in the near future.
RANDOM CONFLICT closes out the comp with their song "10%". They were actually the longest running band in town at this point. They started in 1987 as a crossover metal band (If anyone doesn't want their first 7" from '87, I will give it a good home) and went through a lot of different phases, but kept their boots firmly planted in hardcore punk the whole time. This song catches them in a pretty solid hardcore/street punk phase and they usually put on a good live show. The crazy thing is that they ARE STILL A BAND and play shows all the time. Just for fun, here is a video of them playing their hit "Cyanide Nazi Race" at an insane gig at the Armory in Huntsville in 1990. 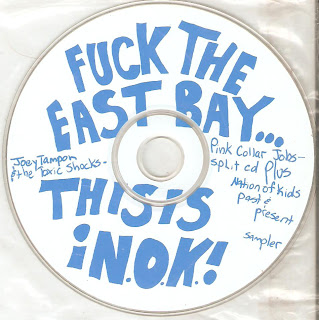 The end result is actually more interesting than the story. Neil and Joey were both from St Mary's, GA and we steered our tour through there to see their families and our friend, Harry. For some weird reason ,we were offered a show with locals, SCHROEDER at this birthday party in a tract home. I still don't understand why. The kids danced around us for the first 10 minutes and then lost interest. The only other people there were a few confused parents and the other band. I think we played for 15 minutes and left. It was super weird especially for me since I didn't even know any of the parents or kids like Joey and Neil did. I think I remember the birthday girl crying. There is also a picture of her sitting on the toilet on the insert of the Toxic Shocks 7". Weird.

I just found this CD in the bowels of Thrillhouse!

I had this CD back in the day. Was a regular attendee of Lucy's in Nashville and a big fan of the slackers, toxic shocks, and the peeps. Still got all those 7"s but don't know what happened to this disc. So my question: who was Will Dandy the heavy metal hippie?

Haha, actually just remembered when I bought this, this dude from this hxc band called brazen youth was like what'd you get and when I said joey tampon and the toxic shocks he said pssh, I thought it was gonna be something good

Will Dandy is actually a cool guy who helped start Punk Planet and went on to play guitar in Ampere.He now records bands at a studio he runs in Western Massachussetts,called Dead Air.
I'm sure Brazen Youth put out some #1 hits too.

Any chance of a re-up of this?