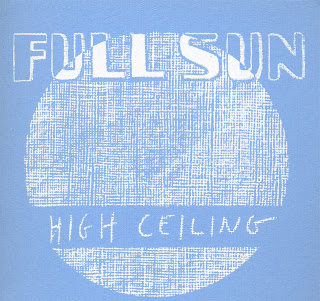 I totally "got" FULL SUN when I was sitting on top of Bernal Hill overlooking the city of SF and I was blasting this tape out of my boom box the day after my birthday while eating a burrito and drinking a tall can. Meanwhile, at that very moment on the other side of the country, Jeff Grant (the songwriter and instrumentalist behind these songs) was getting married to his longtime sweetheart in a barn (I think) in Indiana. I raised a toast to them and the city and flipped this tape over for the fifth time in a row.
FULL SUN started out as a three piece band, but never recorded anything to my knowledge before they broke up. Jeff (their guitarist/singer and formerly of PINK RAZORS) kept the band name and pushed onward. He wrote and recorded these six songs at home, playing all the instruments himself and it came out amazingly. While it has an undeniable late-era POTENTIAL JOHNS feel to me, Jeff pulls out some tricks that make the sound all his own...like throwing in a dub song. He has a knack for ear-grabbing pop hooks and the recording has a thin, treble-y (but high quality and clear) sound that reminds me of AM radio, which I fuckin' love. It's flawless.

Download FULL SUN
If you would like to buy your own copy of this tape, act fast because he only pressed 100. You can get it from Houseplant Records. While you're there, go ahead and order the LP by FAT SHADOW; the band he plays drums for. Jeff is reportedly hard at work on new FULL SUN recordings and I can't wait to hear them.
Posted by Harvester at 10:47 PM