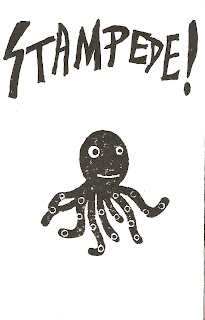 Dean (formerly in the mighty LOS RABBIS) and Morgan (from SHARP KNIFE) had previously played together in a band called FUCK YEA! AVOCADO. After the demise of that band, Morgan moved up to Portland from the Bay Area but kept in touch with SF homies. Their friend, Jon Paul was having a rough time in his hometown of Tulsa, so Morgan and Dean concocted a plan to get him out to the West Coast and start a band for a month in Portland. It was successful (??) and Dean and JP moved into Morgan';s house in PDX for a few weeks with the intention of writing a bunch of songs, maybe recording them and playing a few shows. Dean played guitar, Morgan played bass, Jon Paul played drums (which should be redundant...if you know of this maniac, of course he played drums because he is one of the best drummers in current punk history) and everyone sang. They threw together enough songs to hop on a house show with KUNG FU USA. They only played three other shows (after one of them, they lost control of their van and their brakes while careening down MLK and came to a stop only after running into a giant bush down the street from their house) and then Jon Paul recorded this demo in the basement of the house (called the Danger Zone). On the last song, they squeezed 20 maniacs into the basement to sing back-ups.
After this, Dean left for Oberlin, OH to go to school and played in RTA. Later, he moved back to the Bay Area and played in the band DAVID COPPERFUCK. These days, he lives in NYC and runs the label True Panther Sounds, which put out the phenomenal BROKEN STRINGS LP and alot of other stuff that people may like if they're into...well, I will stop myself here...just click above....you're a human being and you can make your own decisions. Morgan and Jon Paul stuck around Portland for a little while and worked on songs that would soon become the first batch of stuff for their band TULSA. Then, they went back to Tulsa later and made that happen. These days, Morgan is living in the hills of North Carolina and playing drums in the ever-awesome DARK RIDES. He also plays in a band (with me!) called BLACK RAINBOW. Jon Paul is still a maniac on the drums (and otherwise), lives in either Brooklyn or Tulsa and plays in the experience known as HONKY HORN & BAD MOUTH.
STAMPEDE tried to play one last time at a generator show out at Ocean Beach in SF for Morgan's 21st birthday, but the cops came before a note could even be played.

Download STAMPEDE
Updated 2013
One last thing that has nothing to do with the music, really. They recorded this on a 4 track in the basement next to where Jon Paul slept every night. There was also a black widow's nest under the stairs. One night, a spider bit JP on his asshole and it swelled up to golf ball size. He had to go steal pants that were 3 sizes too big for him to wear while riding the bus home from Portland.
Thanks to Morgan for all the info and for being a tight friend all these years.
This tape is from the collection of Erick Lyle.
Posted by Harvester at 11:16 AM

Aw, this is when me and Jon Paul were best friends, and I convinced this girl to drive me to Texas to pick him up, and then drive us both to Portland so he could meet up with Morgan and Dean. When he left he took the bag with all our tapes in it and I had to listen to a David Dondero live tape the entire way home..

I couldn't stop laughing at that cover earlier. It's so good.

They also played a show in Oberlin, Ohio, in 2004. Or at least they made it as far as the poster! I tend to think the thing didn't happen at all: RTA-Two Gallants-Stampede!-P.C.Penis at an old car dealership.

The poster is as far as it got. JP and I were set to head up to Ohio, but my old station wagon got totaled, The $100 Taco got robbed, and JP went to jail all in the same week leading up to it, so we never made it up there. I definitely forgot all about that though-- it definitely was intended to happen.

has the download been removed? Is there any other way to get this album??