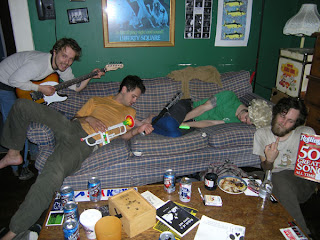 CARRIE NATIONS was born in the little town of Athens, GA; a town that is known for its vibrant music scene that has produced countless amazing (and horrendously shitty) bands over the years. It's a place where the rent is cheap and the booze flows endlessly til the wee hours. Anyone who has ever given the town of Chattanooga a bunch of shit for its alcohol consumption should try hanging out in Athens for a week or two. You'll be wishing you were back on Cole's porch drinking tea in Tennessee in no time.
We were talking about this band though, right? CARRIE NATIONS, I believe, didn't actually have a bass player when this demo was recorded (If I'm wrong, sorry Jon) and the other guys in the band recorded the bass parts themselves. They recorded it at Tight Pockets, the now-defunct all-ages show space in Athens, which has many countless stories of its own. Five of these six songs were re-recorded for their 2003 LP, "Be Still", but this demo shows the songs in an earlier, rougher form. I've been on tour with CARRIE NATIONS all over the East Coast, Midwest and the South, but I don't think I've ever heard them play the last song, "Dumpsters As Providers Of". Maybe it was just out of their repertoire by then? I don't know. Actually, I don't know much about this demo at all, except that it is good and you should listen to it. If you want to hear them play all of these songs a million times faster, then click here. Thanks to Chad for sending this recording to me. 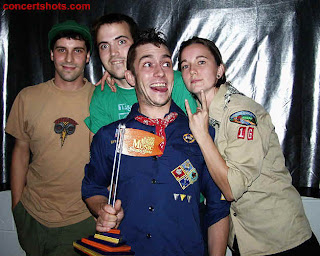 CARRIE NATIONS accepting the Flagpole award for Best Punk Band in Athens. The funny part is that none of these people are in the band.
THIS NEXT PART HAS NOTHING TO DO WITH CARRIE NATIONS.
By now, you may have heard that over the last weekend in my neighboring town of Oakland, there was a huge political march that intended to take over an abandoned building in hopes of establishing a "command center" for the local Occupy movement. Everyone has their issues with tactics and intent (including me), but I want it to be known that I support these actions wholeheartedly. My band was supposed to play either inside the building or outside of it on a bus, but that never happened because the cops exercised their power as brutish thugs by attacking innocent adults and children with gas and rubber bullets. If you only read mainstream media sources, they make it easy to point a finger at the protesters and see where they may be at fault. From their reports, it's easy to imagine a sea of black-clad people heaving boulders with makeshift catapults at innocent little cops just trying to do their job. What is actually happening is that the cops are completely out of control and attacking people for no reason. Here is a picture of the crowd marching on Saturday: 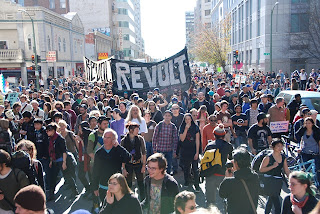 There were families, young people, old people and little kids. I watched livestream footage of a cop knocking a middle-aged woman (who was doing absolutely nothing) backwards over her bike and then she was swarmed by 10 cops with batons drawn as she was arrested. Cops trapped people in a park, ordered them to disperse, then wouldn't let them disperse, and attacked them with tear gas in a residential area. City officials try to make protesters look bad by stating that they committed property damage by breaking down a fence. The reason they broke down the fence is because the cops trapped them, tear gassed them and then penned them in to make a mass arrest. People broke down the fence to escape (successfully) from the cops. (as a side note, the fence in question here was erected by the city around a city park at a very high cost to keep protesters out. Neighboring schools had previously used this park daily for physical education.)
One last thing. The SF daily paper had this quote: "Among the most violent incidents that occurred Saturday night was in front of the YMCA at 23rd Street and Broadway. Police corralled protesters in front of the building and several dozen protesters stormed into the Y, apparently to escape from the police, city officials and protesters said. Protesters damaged a door and a few fixtures and frightened those inside the gym working out, said Robert Wilkins, president of the YMCA of the East Bay."
For one thing, THAT is the "most violent incident"? That is not violence. That is some smart people escaping cops who are trying to pin them in and arrest them for a "crime" of walking around in the streets exercising their right to free speech. I found a quote elsewhere (I wish I could find it now, but I lost it) from a woman who said she was working out when a lot of protesters started running through the building. She said it kinda freaked her out, but she didn't actually feel in danger until she saw cops chasing them with their weapons drawn.
The Oakland Police Department has really fucked up and history is going to look back on them in the same way that it has looked upon the cops in Alabama during the Civil Rights movements of the 1960's. I urge you to read articles written by independent sources who don't have corporate interests kicking money to them. If you would like some more stories about this, please check these out. Thanks
Aid and Abet
National Lawyer's Guild
Huffington Post
AlterNet - which includes a great picture of the cops teargassing themselves.
Also, keep in mind, that less than two short years ago, OPD said they didn't have enough money or resources to keep responding to certain crimes, including burglary, grand theft and failing to register as a sex offender. Article here.

Posted by Harvester at 1:03 AM

Hey! I really dig your blog! My blog is very similar, its about documenting the underground music scene in Hawaii! Please check it out when you have the time!

That link didn't work! Here's a better one: http://stuckonarockstuckunderarock.blogspot.com/

Thanks Corby. It looks great. I can't wait to read every post on there.