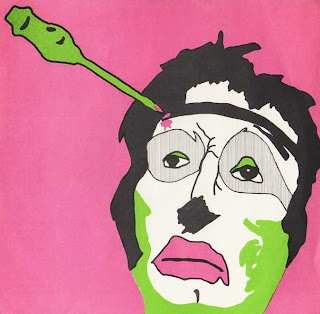 In 2001 or so, my friend, Amy made me a mix tape that was made solely of bands from Indiana and she included the LP comp "Red Snerts", which compiled bands from the Hoosier state that were affiliated with the Gulcher Records label. One of the bands that really stuck out for me (besides the ZERO BOYS and DOW JONES AND THE INDUSTRIALS) was a little band from Bloomington called THE JETSONS Their track on the comp has a lite power pop feel to it, but has more damaging lyrics like "I wanna puke, I wanna vomit on your feet, but you're such a cliche punk, you'd think I was being real neat."  I wanted to hear everything this band ever put out, but had no idea how to find it.
I later found out (from the Maximum Rock N Roll archives) that THE JETSONS had one EP that came out on Gulcher Records back in 1981 and then they broke up. The first song "Suicidal Tendencies" has a really warm, totally early 80's feel to it and is just as good (or better) than their comp track. My favorite part is when the singer is chanting "Kill myself ! Kill myself! Kill myself! Kill myself!" at the end. The other two songs "Genetically Stupid" and "Killing" are also great and make me want to hear more by them, but this is all there is since their demise came soon after this recording.
Members of this band were also in the LATEX NOVELTIES, one of Indianapolis' first punk bands and one of them went on to form THE UNATTACHED in Worcester, MA. That is all I know. I love this band.

Damn, this is really good. I can't stop listening to it! Maybe they should've tried a little harder to think of a band name...