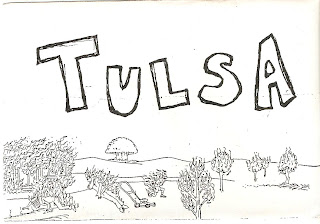 Perhaps you recall when I was talking about STAMPEDE last week and mentioned something about TULSA at the end? Maybe not? Well, Jon Paul and Morgan (from STAMPEDE) started writing these songs in Portland, OR before JP high-tailed it back to his home state of Oklahoma. Soon after, for reasons that have never been quite clear to me, Morgan, a man who was born and raised in San Francisco, gathered up all of his belongings and settled in Tulsa, OK. He and Jon Paul reconvened with a guy named Zack on the bass and TULSA, the band, was born. When I first saw TULSA, I kinda kidded Morgan about how they were a HICKEY-worship band, but now in retrospect, I think I'm wrong. HICKEY was definitely a major influence to TULSA, but so is a lot of other stuff...like NEIL YOUNG (though not obviously) and lots of great Southeastern US diy punk. They recorded this demo at the record store that Morgan ran called "The $100 Taco" during an ice storm and I think they only sold it on some tours in small towns in Arkansas, Indiana and Oklahoma. It has early versions of many of the songs that became staples of their lives shows, such as "Fun With Fallout" and "Drunk in the Supermarket".
Speaking of their live shows, they could either be an affair that made you want to freak the fuck out (in a good way) or it could be an insane, hilarious drunken trainwreck. I remember seeing them one time in Chicago at some big, douchey bar. They had already played at the Mauled By Tigers Fest, but got onto some weird ass show at a bar across the street from the fest. It costed something ridiculous to get in...like $8 just to see TULSA. I didn't pay it and I'm not sure if anyone else did either. Everything got hazy and I seem to remember Morgan flying into Jon Paul's drumset while playing a guitar solo. I also seem to remember everyone getting kicked out of the bar, even the band, before the show was over. It wasn't always like that. Sometimes, they actually took the stage (or the living room or the basement or the corner) and ripped through their songs with so much precision and energy that it made my head spin. On a good night, they were always the best band of the show and on the bad ones, they were still the most entertaining. 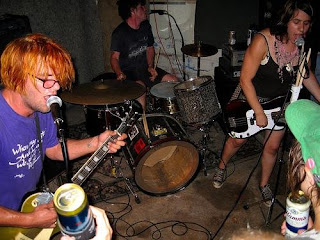 TULSA in Milwaukee with Heather on bass. Photo by Andy Junk.

A little while after this tape was recorded, Morgan and Jon Paul ended up back in California and got their friend, Heather to play bass. They went on a bunch of tours and recorded a bunch of stuff, including their outstanding LP "Sour Digs".These days, the members of this band are all far flung and scattered, but still involved in awesome bands, like HOMEOWNERS, KREAMY 'LECTRIC SANTA and DARK RIDES. 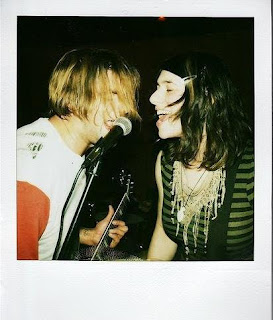 Download this fuckin' tape and then fuckin' crank it up and then get really drunk and call in sick to work so that you can keep listening to this and keep getting drunk,,,,,okay?
This tape is from the enchanted shelves of Barker Gee.
Posted by Harvester at 12:39 AM

Really, really excited to download this on my own computer as soon as I'm home from tour. Tulsa and Unit Breed were the last bands I saw as a resident Mississippian when I was 18. They played at this screenprinting shop in Gulfport that had a rad skate ramp in the back. Tulsa absolutely blew my mind and I definitely lost my shit and bought Sour Digs, which has become one of my all time favorite records. Great way to say farewell to the South. (oh, i thought unit breed was real trippy and cool too)

blah. "Marin County" would have been a more apt name for this band. they were pretty good tho

marin county? lost me there, unless it's a low crack at heather b.

If you can read this, can you please reupload this demo tape? I would be thrilled to be hearing it. Thanks!-Anthony