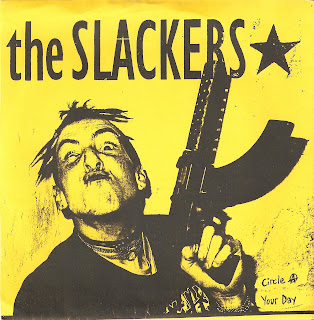 I bought a drum set from my cousin for $100 in 1988 when I was 12 years old. I didn't know how to play it, but I banged on it every day and tried to come up with something that remotely resembled anything that I had ever heard in my life. Most of the time, it was fruitless and sounded like a 12 year old banging on some trash. I had read articles in magazines about how when THE RAMONES came along, punks around the world were inspired to pick up guitars and start their own bands because all you needed was 3 chords and a steady beat. The articles would talk about how laughably simple their songs were. When I listened to THE RAMONES, I heard untouchable genius that could not be replicated. Sure, I could sorta play "Bltzkrieg Bop" on guitar (I even taught my dad when I was 13. He had never touched a guitar in his life), but that fucking machine-like beat that Tommy Ramone was playing was impossible for me. I would play the drums for hours and not even come close to sounding anything like it. I constantly felt like a failure at music, but soldiered on, playing in teenage punk bands that never amounted to much. I had this idea that your band had to sound perfect and you had to be on a record label to ever put anything out. My bands would make tapes in editions of 3-25 because we didn't know what else to do.
As time moved on, I heard bands like BEAT HAPPENING, RAOOUL and SKINNED TEEN, who helped me to realize that you don't have to be a pro musician to play music and put out records. But the biggest influence to me at that time, who helped illuminate a path to a greater understanding of DIY, was THE SLACKERS. They lived two hours north of me in Huntsville, AL and they were punk as fuck. The punks in my town had some cool bands (like HEAVENLY BANGING CANNON, WAFFLE HOUSE RIOTERS, and THE SPASTARDS), but THE SLACKERS were actually putting out records, touring, setting up shows and living their punk lives 24 hours a day. When I heard their first 7", "Where Were You in 92?", I laughed because it was so ramshackle and amateur, but also catchy and punk. Even I could play drums as good as their drummer (I found out later that even though Matt set up a bass drum in front of him, he didn't use it). I knew that I had to see these guys live. 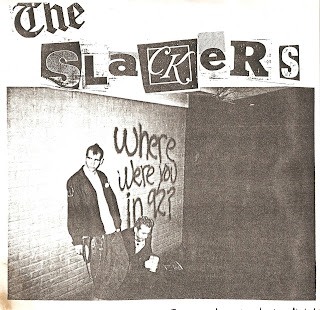 One of the first times I saw THE SLACKERS play was at a thrift store in Huntsville (next door to the northside Bandito Burrito, for any locals reading) with HEAVENLY BANGING CANNON and THE FUN GIRLS FROM MT PILOT. I remember that during their set, everything just kept breaking and falling apart, but they just kept playing. I think I remember their bass player, Joey getting naked and yelling a bunch. It probably sounded like crap, but they were way more fun than almost any band I had ever seen. It was really fun and inspiring to see this band and they changed everything for me. When I got back home, I immediately got my band to cover "Scram", off of their second 7" and no one in the band was excited about it because they really wanted to sound like PROPAGANDHI. It was disheartening and I gravitated more and more towards the scrappy punk that was rumbling from the Huntsville scene until I moved there the day after I graduated. I lived in my car for my first summer in Huntsville, usually parked right down the street from the van that the SLACKERS singer, Heiko lived in. 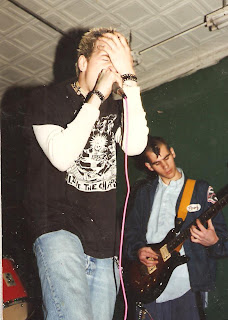 Joey (formerly of SHITBOY FROM OUTERSPACE and CHEESE ASS CHRIST) played the bass and his whiny, squeaky voice was a drastic contrast from Heiko's gravel-throated roar. Together, they sometimes did a call and response that sometimes worked, sometimes didn't, but was always entertaining. Their guitarist, Robert wrote the more poppy songs and provided a raw, fucked guitar sound that could only be made with the cheapest of equipment. Their drummer, Matt was barely hanging onto the beat in the beginning, but like I said, it meant a lot to this dumb teenager from the sticks. Their first songs like "I Wanna Destroy Music" and "Fatto The Cop" were anthems to me, helping to instill an early hatred of cops and a complete disdain for top 40 radio music. They followed their first 7" with "Circle A Your Day" in 1994, which showed them playing a little tighter, but not by much. The songs "$70 Rock Star" and "You Can't Do Just What You Want To Do" show a little more effort than their first 7", but retains all of the anger they've reserved for sellouts, posers, rich assholes and society at large. Their last recorded effort was a split 7" with the aforementioned FUN GIRLS and shows the band at their tightest. It always felt good as a teenager in Huntsville to sing along to "Society". "Fuck you and your racism! Fuck you and your sexism! Fuck you and your capitalism!" In "I Was A Teenage Anarchy", they sing about sniffing glue, making your own clothes, and being a punk. It fucking ruled and the complete and utter DEAD KENNEDYS rip-off part still kinda makes me laugh. 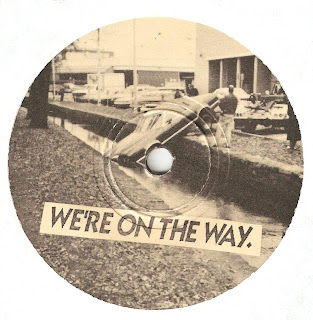 In addition to their other tours, THE SLACKERS went on a one show tour out to California where they played at Gilman and ended up jumping onto a show at Epicenter. When they returned to Alabama, they left Heiko in Oakland (where he remains to this day) and broke up. They played one last show at the Tip-Top Cafe in Huntsville where punks came up to do their own impression of Heiko's singing for the band, since Heiko was stranded 3000 miles away. At the end of their set, Joey announced, "I'm starting a new band tomorrow called JOEY TAMPON AND THE TOXIC SHOCKS. If you want to be in it, talk to me about it." Even though I didn't really know Joey, I told him I wanted to be in his band since THE SLACKERS meant so much to me. Without knowing if I even played drums or not, Joey invited me to be in the band and true to his word, we had our first practice the next day. We were a band for the next 3 years and that dumb, talent-less 12 year old drummer inside of me was stoked beyond belief to actually be doing something that I never thought was even possible at one point in my life: playing in a punk band that put out records. 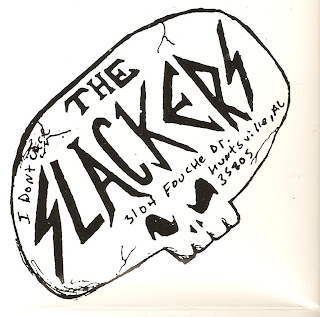 THE SLACKERS also appeared on the "Play At Your Own Risk" compilation on Recess Records (now resisting the urge to toss out an aside about how Recess was once fun and punk, but has negated their credibility and relevance by putting out the newest SCREECHING WEASEL 12") and posthumously offered up 2 unreleased songs that appeared on the "Fuck The East Bay, This is N.O.K." comp. They are both in this download and they rule. I guess this isn't a complete discography because there is also a tape floating around of some more unreleased songs. If you have that, please send it to me, digitally or otherwise (emphasis on the otherwise).  Now concludes this lengthy essay on a band that you may not care about.

UPDATE: THAT TAPE IS RIGHT HERE.

If you want to read EVEN MORE about the band, check out my old buddy, Seth's blog right here.
Posted by Harvester at 11:44 AM

Email ThisBlogThis!Share to TwitterShare to FacebookShare to Pinterest
Labels: Alabama, Punk, The 90's

I have the tape! I'll rip it tonight and email you. I can make you a real copy too but the original's on it's last legs, I think.

Hey, this site rules. The Slackers were one of the first punk bands that I got into. Bought the first 7 inch at American Beat.

Holy Shit! Waffle House Rioters - Huffman High School punk rockers! I remember that they and Mephotis won Punk War II and that Russell was supposed to put out a split record for them because of that. Ahh well.

I really wish that the split record would have come out. I can only rely on my spotty memories of WHR being super punk and their two singers running into the crowd while singing.

Oh god puh leeez put all the FUN GIRLS on here. I loves it so much. Totally one of the best TN punkbands of the 90's. I only got the split. I had a tape so long ago.

Wow...i just accidentally stumbled accross this post and the memories came flooding back! Heiko was a friend of mine from high school and i remember how untamed and fierce this part of life was...great times....thanks for the walk down memory lane!

I remember that show! Played in a previous band with Robert that didn't go anywhere. Also with Heiko, RIP