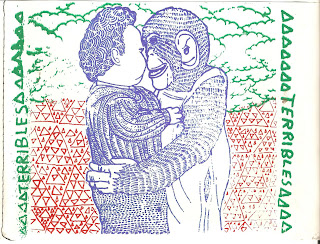 This is the first album that I ever heard by TERRIBLES and it also the one that enamored me to them, thereby making me a lifetime fan (as opposed to a LIFETIME fan, which will never happen). As mentioned previously, they have been a band since 9th grade (going on their 15th year now) and they have rarely stepped foot outside of their environs of New England. It could be insularity. It could just be laziness, but THE TERRIBLES have stewed in their own town for so long that they have crafted a sound that, while inspired by many random sources, is wholly their own. 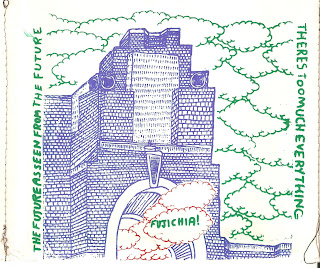 This CD-R is apparently a concept album on chaos theory and shows the band still digging into their love of the MEAT PUPPETS, but also getting truly weird and delving into some elements that sound inspired by "Cacophony"-era RUDIMENTARY PENI. One of my favorites on this album, "Romancing the Bunsen" is about the universe unlocking its secrets and chaos, but sounds sort-of wistful and romantic. When I listen to this album, I can't help but conjure up images of a rainy Worcester, MA, goofy kids falling all over each other while dancing and big rotting houses.
The packaging on this is insane. The front and back cover is a 3 color, intricate screen-print (see above) and it's sewn together to make an envelope (made by bass player, Mike Leslie). The lyric sheet is a giant 2 foot by 18 inch, 2 color, double sided print that is folded up into the envelope (made by guitarist Jamie Buckmaster) . There is also a second insert that is just a great drawing of their drummer, Matt Carroll with all of the song titles around him (made by...Matt Carroll). They did all of this crazy work for a CD-R release about chaos theory and they probably made 50 copies of it...many of which did not make it very far outside of Worcester, MA. It's this kind of weird, obsessive vision that really draws me to these people and this is exactly the kind of band that makes me feel like i'm not alone in this world. 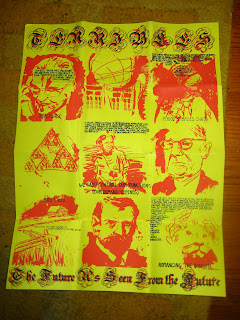 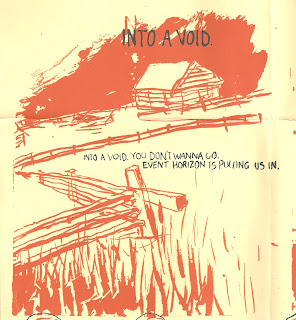 Ever since I first heard this, I can't stop thinking that there really is too much everything.
Posted by Harvester at 12:02 AM

I had the chance to see them a couple years ago and they blew me away....Love the Rudimentary Peni comparison....my first thought too...and thank you for posting this....I've been trying to get ahold of these guys to have them come up to VT and play but no luck....

If you need a contact for them, pass along your info to remoteoutpostsATgmailDOTcom and I will forward it to them. I'm sure that if they have the time, they would love to play Vermont.

although this cd has TOO MANY INTERLUDES!

I AM A BIG FAN OF THE INTERLUDES!
BEST BAND!

Hey Greg??/...I can't thank you enough for getting me in touch with these guys....looks like I'm gonna get them up here after all!!!!!

the future is pretty cool, huh?