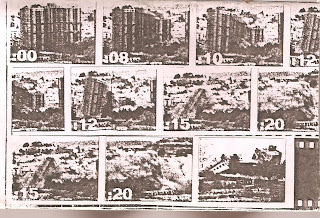 SHOTWELL started back in 1994 (as SHOTWELL COHO) and they continue to (sort-of) exist as a band to this day. To me, and many others, they are as synonymous to the Mission District as burritos, norteños y sureños, street-sold churros and the Mission theater sign. Their rough, tuneful songs have mirrored the class struggles, police repression and the pure fucking joy of living in San Francisco for the past 17 or 18 years. The band has been a revolving door of drummers, bass players, and second guitarists with Jimmy Broustis manning the vocal / guitar duties since day one. On record, Shotwell is flawlessly flawed, shambolic and raw. Most of their albums and singles have been on constant rotation anywhere I've lived for the past 15 years and many of their songs have helped to inspire a constant, snarling disdain for authority. SHOTWELL yearns to live in a world that is free of cops, drinking in public laws and the upper class. A live SHOTWELL show can go in a few different directions: On one hand, it can be the best thing ever - dancing punks, a tight band, Jimmy's long, rambling diatribes that end up making such a concise point that you'll think about it for the next two days. On the other, they can be a terrifying, depressing affair where the band sounds like harsh noise, Jimmy is trying everything he can to make the songs fall apart and someone gets punched. I've still managed to have fun at those shows though...somehow. Alcohol is usually involved. 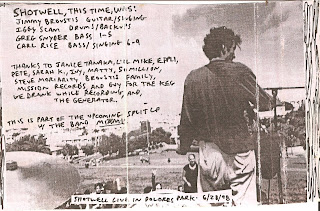 This tape is one of my favorite things that SHOTWELL has ever recorded. It shows the band at a really tight, ragged point and the songs are all top-notch. Jimmy asks a few timeless, musical questions, such as "Where the fuck is Eppli?" (sources are still unsure) and "Do we have what it takes? We've got 5 years....fuck no.." (it's now been well over 5 years and sources are still confused as to what we had 5 years to accomplish). Jimmy's voice does that beautiful thing that it does where it goes from a half-laugh to a snarl that lets you know that he's not fucking around. All the while, he is backed up by the breakneck, steady drumming of Iggy Scam and the solid bass-work of Greg Snyder....and then Carl Rice...How many bands do you know of that change band members so quickly that they can't even keep the same people throughout one album? Most of these songs later appeared on their fabulous split LP with MIAMI (which came with a 30 page zine that chronicled the efforts of the Mission punks to start having punk shows on the streets of SF after all of the all-ages warehouses got shut down), except for their excellent cover of the AVENGER'S "Cheap Tragedies", which can only be found on this tape.
I think my favorite line from this tape is "...tell me to get a fuckin' job! Fuck you Nazi, I'm throwing rocks!"
If you want to keep up with SHOTWELL's website, which has not been updated or relevant since 2001, you can find it HERE..


Download Geneva Avenue Fallout
This is for the people who are still in the streets in Oakland today, fighting for economic justice and against police brutality. 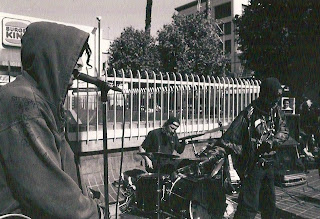 You forgot BEN who played drums for most of the mid zeros...but I cannot remember his last name. He lived (lives?) upstairs from Tony and had a very sweet Newfoundland... Unless that dog was Greg Snyder's.

Maybe Wade once or twice?

i played drums for like 2-3 songs at that show in Black Butte. Does that count? Jimmy said I was better then Joey but then again he also said I had diabetes.

It counts. You may also have diabetes. Jimmy used to mail me tiny little black pills in Georgia to help me with my "blood flow". I took them, even though I didn't know what they were or how many I was supposed to take.

Dude!
You missed SO MANY!
on drums there was Phil, who was later in Majority Whip. He was drummer #3, I think. Then came Pete.
Pete Simonelli played drums on the entire Shotwell 10".
Ernst from Jack Acid did a short sesh on drums but got the boot when he was too afraid to play generator shows (thus enter Iggy Scam, drummer #5).
While I went to Cuba, Jim got Ivy but you got her.
Next, #7, was Chris Myers of Mish Rex fame who went on tours and plays drums on two songs of Shotwell side of Miami split.
Antonio Ramon played drums for a minute and at one show at Gilman in year 2000, I think, Aaron Elliott and Antonio actually split the set, like planned and on purpose and not drunkenly!
I'm sure I'll think of more.
My question: Are you sure Barger actually played in the band?
The riddle: How come Erin Yanke was never in Shotwell. Somehow she was never in MDC either? WTF?!?

Sorry, I don't have the doctorate in Shotwell. Paul B was not in the band. I got mixed up.
Why wasn't Erin ever in Shotwell? I called Jimmy tonight to see if Mike Wilson can be the new drummer.

Alan Disaster played bass (??) while he was living in Oakland. Also, Shellhead played THIRD guitar at the last Mission Records show, if that counts.

i'm pretty sure matt powell (rudiments/faggz) was in shotwell for at least a show or two...

Hey! I played bass very briefly in Shotwell while living in SF. Fuzzy memories, but I think that we only played live at the last 40th street warehouse party? 2005? Ben, Tony, Jimmy and I. Every practice had different people each time. I don't even think that I met or played with Tony until right before that show! Wizard times.

I can't believe how many people have played in this band. I'm still missing some. Thanks, Caroline.

Caroline and I attempted a "new" band with Jimmy in early 2005 that we jokingly called "Notwell Oh No!'

I decided the practice tape of that band wasn't up to this blog's standards and did not send it.

But it rocked and the songs we wrote all came out on later releases of official Shotwell.

Practice #1 down, practice #2 tomorrow... I think playing a show this Saturday...

i played bass when buzz moved back to delaware but on the night of the first show that i would've played with jim and chris, i was passed out (from taking sleeping pills for some reason, not sure why) in the laundry room / my bedroom at the san carlos house. end of that story.

Hi Greg! What about Billy Joe Johnson? I think he was in the band for a minute!!
Ivy J

great post/thread...jimmy is such an anti inner ned dude that i called him tonight because people on the east coast had heard Jimmy Wilsey of the Avengers had died and misconstrued the news and thought it had something to do with Jimmy of Shotwell who'd once covered Cheap Tragedies by the Avengers. Jimmy says a new Shotwell recording is forthcoming and tried o play it for me over the phone with Steve Moriarity of the Gits back on drums. Anyhow, Jimmy was alive and well...and was also excited to tell me that he had sold a flyer by my ye olde band The Bedlam Rovers playing with Operation Ivy at Komotion that had gone for $90 recently on eBay! I promised him a stash of Offspring Chumbawamba, Cringer and Neurosis flyers I have in the basement...atill trying to ascertain whether it was Buzz on the Cheap Tradgedies recording ...

Shotwell was once backed by Reagan Concentration Camp with Ricky PBR on back-up vocals & death to republicans/C.E.O's rants & me on acoustic guitar one night in Athens, GA at Matt Cathecart's house. Seriously. The performance was a last minute gig Matt orchestrated after the SHOTWELL show at a bar. That happened only because Jimmy & his "roadcrew" (me) driving & Ricky The Prisonbound Roadie (Roadie) weren't allowed very passive aggressively to stay at the house where his recruited & experienced in SHOTWELL antics rhythm section, Buddha & Stickrod, were invited to stay. Those 2 actually drove another van the whole southeast tour so they didn't have to be around us. pretty funny but understandable. Then RCC played our set. Ricky broke his femur during our performance. Has that ever happened it the history of acoustic 2 pieces? Due to my drunken state Matt kindly drove Ricky to ER where he got a full leg cast and good pills for sharing for the lovely drive to the last show of tour at a Mexican restaurant in Dalton, GA w/ Twat Sauce & Ghettobird. Best show of tour. That tours line up w/ Bood & Stickrod recorded in Chattanooga right after tour but never surfaced as I'm aware. Jimmys the best. One of a kind. He said next time teach Ricky how to play drums and I play bass then he can save money.