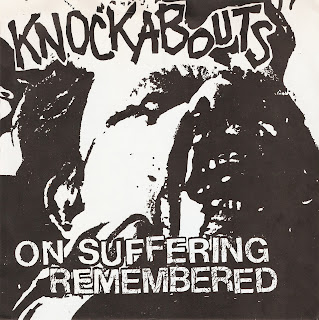 THE KNOCKABOUTS and GNP were two of my home state of Alabama's first hardcore bands. THE KNOCKABOUTS formed in 1982 and their first show was performing at a talent show at the University of Alabama in Huntsville. I've really never known too much about them, but I picked up this 7" in '95 when I lived in Huntsville and it stayed close to my turntable for months...years even (it's next to my turntable right now.). "The Beautiful" has been a mixtape staple for years and is the perfect angry blast for any teenager who has to grow up around fuckheads in rural Alabama. I usually hate it when any band covers "Sweet Home Alabama", but when it's a hardcore band from the state in question and they change the lyrics to put down rednecks and oppression, I can get behind it. My favorite song on here is either "Sick Society" or "Fast Pulse", which contains the classic line "Help me, I'm trapped in a human body!" I later changed that line for a tape comp that I put out and called it "Help me, I'm trapped in a Ford Festiva!"
Prank Records put out this 7" in 1995, but all the songs are from their 1983 demo tape. You can find out more info about THE KNOCKABOUTS here.
Totally raging, totally worth your time. Eight songs in about 10 minutes. 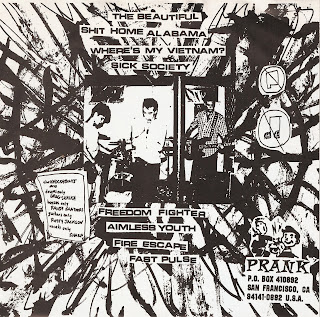 Posted by Harvester at 5:36 PM