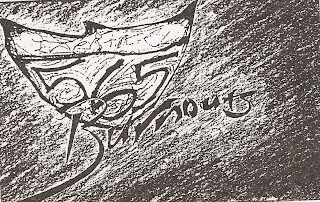 565 BURNOUTS were a band of 4 people who seemed to live, breathe, eat and play only 70's and 80's punk. Even though the rest of us were firmly entrenched in the mid-90's and all the pop-punk catastrophes that came with it, 565 BURNOUTS were still proudly wearing ripped up MDC shirts and wearing out their DILS records from repeated listening. Their singer Penny, seemed to loathe being in front of people and would scream her shrill lyrics and stare at the floor while the rest of the band went so buck-wild that they would unplug themselves and not even realize it. I lived with their guitarist/bass player/singer Jason and he was a spitting image of Darby Crash, right down to the engineer boots, shitty homemade tattoos, chipped teeth and big chain around his neck. He used to sit around the house stabbing safety pins into his arm while smoking cigarettes and blasting BLACK FLAG. Punk!
I'm surprised that the quality of this tape is still holding up as well as it is because I have listened to this thing countless times. Songs like "Coffee Shop" and "Spin Around" have been firmly implanted in my head since the mid-90's. "What the Fuck" was definitely just a vehicle for showing off Jason's Greg Ginn-like guitar hooks, but it's still a great song. At the time of this recording, their drummer Ben, was the punkest person I knew and I was actually kinda scared of him until I joined a band with him and discovered that he is one of the sweetest motherfuckers you could ever meet..
Not long after this tape was recorded, Penny quit and Ben moved to Hawaii. The band kept going for a short time and I played drums for them for a little while. At one of the last shows, I set my drums on fire and Jason set himself on fire and dove head-first into a bunch of gravel. It sucked. It was time to break up...and they did.
I tried to find some pictures of 565 BURNOUTS, but I don't have any. Instead, here is the Google Street View of the house where they recorded this tape...it looked a lot more punk then. 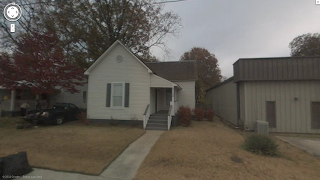 By the way, it's pronounced "Five sixty five" not "five hundred and sixty five". 565 is the interstate that runs through North Huntsville, AL.
Posted by Harvester at 6:45 PM

Email ThisBlogThis!Share to TwitterShare to FacebookShare to Pinterest
Labels: Alabama, Punk, The 90's

Hey can you fix this link! Thanks a bunch!

Link is fixed. Sorry it took so long.