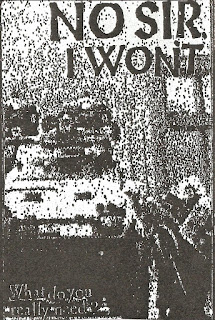 So, I just got back from tour a couple of days ago and I believe it was one of the best I have ever been on. I have been fortunate enough to play music with some of the finest humans I've ever encountered throughout the years and the three other men that I share a band with now are no exception. In the fine tradition of bad things happening to good people, our bass player Bryan got horrendously nauseous immediately following our set at the Not Dead Yet fest in Toronto and he retreated to our van to hopefully ward off the impending rivers of puke that would soon be flowing from his (usually) impenetrable guts (seriously. I've seen the man eat blood sausage, haggis, beef jerky and obnoxiously phallic bratwursts without batting an eye or vomiting a turd). He fought it all back until 4 am, when we were all packed in the van and headed towards the house to sleep. Bryan calmly turned to me and said "Hand me that bag." I scrambled around in the dark and came up with a stuff sack for a sleeping bag. In mere seconds, Bryan was vomiting seemingly everything he'd ever eaten into that tiny bag while my shoulder rubbed against his and the van ambled along through a sleepy Toronto morning. This set the standard for the next few days, as this fucked up bug/virus worked it's way through each member of the band except for me (thankfully). A couple of days later, we were back in the U.S. and headed towards our next show in Portland, Maine. Looking at the map prior to our tour, I realized that during this drive, we would be headed straight through Littleton, NH which is the final resting place of that dumb scumfuck, GG Allin. I suggested that we stop to check it out and was met with absolutely no resistance from my bandmates. (A little backstory: GG died in 1993 and admirers have been flocking to his grave ever since to pay their respects by pissing, vomiting and shitting all over it. It took nearly 16 years for the priest who ran the cemetery to finally get sick of cleaning up after scumfuck oogles and he removed the gravestone to deter further "defacement". His grave is now unmarked and unadorned.) Upon pulling into the cemetery, it took us no less than 3 minutes to find his grave and it took me no less than 45 seconds to step on a dried up turd next to his grave. Fucking beautiful. 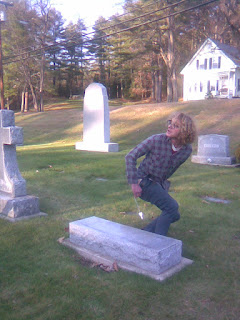 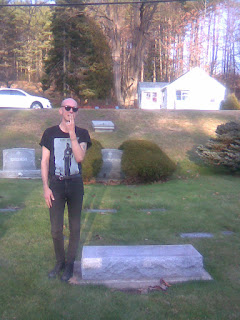 Soon enough, we were back on the road and soon enough, the nausea started to settle in on Kyle. We tried to determine if it was due to Bryan's germs, expired food or the curse of GG's grave. We never knew for sure, but you can be certain that by the time we hit the streets of Portland, so were the entire contents of Kyle's stomach. Like the champ that he is, Kyle still played the show that night. During our first song, I thought, "Man, Kyle is still playing his guitar lead perfectly even though he feels so shitty." At that moment, I looked over at him and he was puking into a bucket while playing the lead note-for-note. Fuck you, GG!
After our haggard and painful (for Kyle and any queasy members of our audience) set, the perfectly healthy and energetic NO SIR I WON'T took the basement by storm. With an ex- (and current)member list that includes SURRENDER, LIBYANS, WITCHES WITH DICKS, SHITHEAD, BRAIN KILLER and FOREIGN OBJECTS, I have to admit that I had high hopes. I also have to admit that I was not disappointed for one second. While the trajectory and style of the band are something that doesn't often prick up my ears in 2012(UK peace-punk in the vein of FLUX OF PINK INDIANS and CRASS), NO SIR I WON'T breathe life and excitement into a genre that is often plagued by historical reenactments. Watching their singer Dan perform makes me wish that all frontpersons could be more direct and charismatic. Meanwhile, the rest of the band pounds away relentlessly in a way that will reaffirm your faith in punk if it was lacking at all. Even though I was fighting off my own pangs of nausea, I watched every second of their set, making sure a bucket was in reach just in case the plague caught up with me. A dizzying 25 minutes later, I made my way out of the basement into the cool New England air and bought everything the band had for sale. You should do the same.
The next day, tour went on. Less than 2 hours into our drive, I was grossing out a cop on the side of the I-95 while Barker was puking into the weeds, but that's a story for another day.

The band just put out a great two song 7" that is available from Destroy Me. You should get it.

For the record, I think GG Allin was an interesting and entertaining figure in American punk, but ultimately nothing past his tenure in THE JABBERS ever caused more than a brief chuckle from me. It's all shit.
Posted by Harvester at 1:05 AM

It is good to see you post demos or eps by new bands here, especially something discovered from tour.

I usually try to do so.