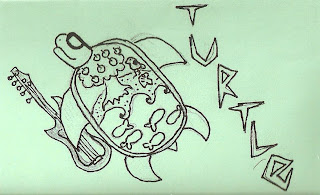 I reviewed this band's demo earlier this year for Maximum Rock N Roll and I still think my feelings are exactly the same regarding this recording. Someone even wrote in a letter to the mag that mentioned my review. It was one of those typical letters where folks write in and complain about how everything related to the rag has turned into some "PC pussy ass bullshit" besides George Tabb's column or some such nonsense. Maybe it has? I don't think so. I also don't have a problem with political correctness, pussies, asses or bullshit, but I think George Tabb's column is pretty awful sometimes. Anyhow, the writer said that they were sick in bed one day and read the magazine cover to cover. He complained about the usual stuff (see above), but said that my demo review of this band was touching and even brought a tear to his jaded eye. (I was really trying to steer this entry more in the direction of talking about the band rather than talking about myself, but everyone can see I am failing miserably.) Anyway, here is the review:

"it's bands like these that make me happy to do demo reviews. The first 3-4 minutes of this tape is chock full of samples that relate to turtles... like, the Teenage Mutant Ninja Turtles theme song and news clips about turtles. When it finally gets to the music, the listener is greeted by a super lo-fi (like it was recorded on a dumpstered boombox) recording of a teenage (?) punk band playing their scrappy, poorly executed, falling apart songs in a garage in Southern California. There is no pretense, no bullshit attitude, and absolutely nothing fancy about this. It’s just some kids banging out their songs in a room to the best of their abilities and putting it out on a a tape. They sound like three people who just picked up their instruments, learned three chords and went with it. Even though I’m not really into these songs, this is exactly the reason why I love punk. Please keep it up TURTLE, and thank you for sending your tape to MRR."

I still stand by that. This is the reason I love punk. Anyone can do this. I don't think that it means that anyone should do this, but anyone can. Also, I would like to say that my favorite part of the tape is during the last strains of their song, "Of Money, Stocks, Etc" as the whole song is falling apart (was it ever together?), the singer mutters, almost as an afterthought, "People are crazy..." Thanks TURTLE. People are fucking crazy.

I like how stripped down they are, focusing more on what has to be said, rather than on showboating their musicianship (though musicianship exploitation ca work for the sound of some bands). Turtle have their own sound and agenda, and it rules.