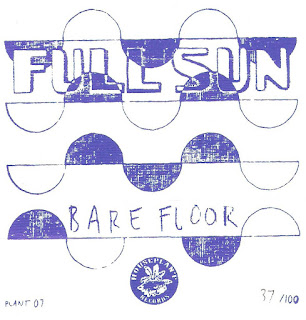 Well, the end of the year is approaching quickly, and traditionally it's a time when people start thinking about their favorite musical releases of the past 365 days. Every year, folks always complain about how there wasn't anything good that came out. Then, if you were to fast forward their lives two years, they will complain about how nothing is as good as it was two years ago. My point is, people are releasing great music all the time, even if it's not on your radar. There is someone, somewhere, holed up in a tiny basement writing the new anthems for your life. Now you just have to find them and get a copy of it. That's the part that can be the hardest sometimes.
This is where FULL SUN comes in. They put out an excellent tape last year that was easily one of my favorite releases of 2011 (you can find it here and here). The newer tape, "Bare Floor" is just as great, if not better, and will top the list for this year. As mentioned in the write up of the other tape, FULL SUN is the recording project of Jeff Grant (from FAT SHADOW and formerly PINK RAZORS) and he writes solid, catchy basement punk songs that offer hook after hook that will have you listening for days (weeks, years). Some comparisons could be drawn to POTENTIAL JOHNS, PLOW UNITED, PINK RAZORS and early SUPERCHUNK, but Jeff definitely has his own thing going here. Like the last tape, there are some awesome dub interludes that come from a love and respect of the genre, so it doesn't make you feel like some white clown in a rasta/dread hat is giving you the wink-nod while he slaughters your eardrums (say, like JAHBREAKER).
Once again, there's only 100 copies of this tape in existence, so get yours now. I warned you about the last one and now it's sold out. Don't miss this one. You can order it from Jeff's label, Houseplant Records.

Jeff and I briefly discussed having my band, NEON PISS travel out to the Midwest and act as his backing band for a FULL SUN tour, but it sounds like a logistical nightmare. If any rich benefactors want to pay for 4 people to fly out to Indiana and make this happen, get in touch. Ha!
Posted by Harvester at 10:14 AM