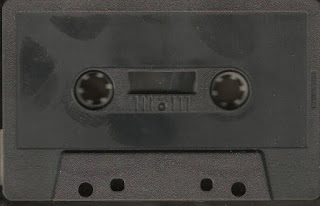 I don't have very much information on this short-lived band, even though these people are all good friends. Shortly after I moved to Bloomington, IN, I told the band I would set up a show for them and spent a lot of time convincing them that the town, much to their disbelief, was not a boring-ass wasteland of dumb hippies playing folk-punk in the streets. They were sure that no one would like their band. That is, if anyone showed up to actually see their band. They mostly made the trip to hang out with me and I'm glad they set their standards so low because when the day of the show came, almost no one showed up to see them, even though I plastered the town with fliers.  It might have helped their cause if I mentioned that their rhythm guitarist was the original drummer of a very popular rock band, but that seemed like a cheap ploy.I thought it was more important to mention that the band had members of HELLO SHITTY PEOPLE, NO SHIT SHERLOCK, TOTALLY CHAOS and ALLERGIC TO BULLSHIT. You would also think people would wanna see a punk band with an accordion player. Turns out that most of the punks in Bloomington didn't know or care about those bands, but DEUCE BOLDLY still played their hearts out to the 8 or 9 people in attendance. I promptly took the band back to my tiny apartment, got trashed, got in a drunken argument, ran off into the night and woke up with a ceiling fan bonking me in the head over and over (long story). 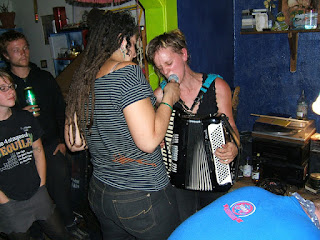 DEUCE BOLDLY somewhere in America with a human mic stand.

The band recorded these eight songs and they never got released in any form at all. These things happen sometimes. So, here's DEUCE BOLDLY in all of their ramshackle glory. Hopefully the band won't hunt me down for letting you hear this. 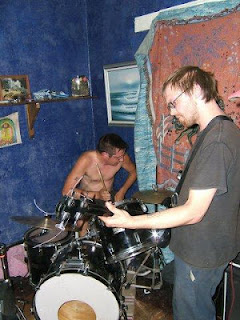 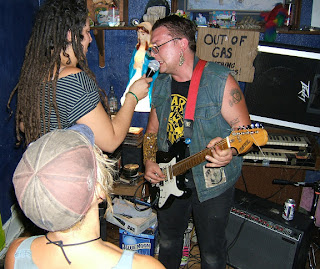 EDIT 12/9/12: Stewart from No Breaks Records dug up the insert for this tape (which I never knew existed). Thanks Stewart! 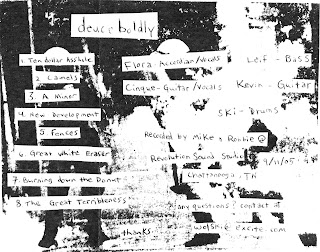 This next part has absolutely nothing to do with DEUCE BOLDLY.

I just got word that Sarah Kirsch has passed away after a long battle with Fanconi Anemia, which is a rare genetic disorder that causes leukemia and other cancers. Many readers will recognize her as Mike Kirsch, who played in such great bands as TORCHES TO ROME, PLEASE INFORM THE CAPTAIN THIS IS A HIJACK, JOHN HENRY WEST, PINHEAD GUNPOWDER, FUEL, BAADER BRAINS, MOTHERCOUNTRY MOTHERFUCKERS, BREAD AND CIRCUITS and many more. I never met her but admired her from afar for years. The bands that speak the loudest about how they play with passion are usually trite and soulless, while the people who actually just play passionate music will literally stop you in your tracks. Sarah Kirsch was in the camp of the latter. I admired her integrity (like, say, quitting your mega-popular pop-punk band because a bandmate puts out a record on a subsidiary of a multinational corporation) and strength in the face of adversity. I appreciate her determination to keep creating new and exciting music rather than resting on the laurels of her past accomplishments. I admired the courage it must have taken to go on tour while coming out as a trans-woman in a hardcore scene that might not be too accepting of people who are just trying to feel at home in their own bodies. I don't want to say too much because, like I said, we never met. My thoughts are with her loved ones on this early morning and any people who are reeling from this great loss to the world. Play music like there's no tomorrow and be sure to tell your friends that you love them.
Seriously, WTF? So good.

You can find more info about the troubles she was facing here. May she rest in peace.
Posted by Harvester at 4:38 AM

cool. i just asked cinque if he had any copies left of this a few days ago.

how many bands have cinque and ski been in together? i mean, really!

this was recorded at the then new Revolution Sound studio in Chattanooga by Mike Pack just a week or so after hurricane katrina in the middle of a tour that would make a hilariously tragic short story. also, those pictures are from the Outpost in Denver, CO. thanks for the post!

WHY DON'T RELEASING THIS SHIT??

The download doesn't work!!! my heart aches as a result.

oh right finish comment before submitting. please, pretty please can this be made available again?

I will in the next couple of days. Please check back.