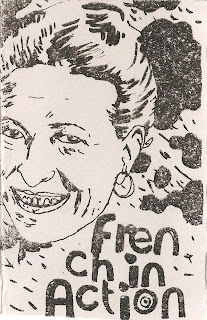 Since I know next to nothing about this band, today's installment of Remote Outposts is brought to you by their old bass player, Mike Leslie....

French in Action (named after the French language textbook) was a Worcester/Providence trio that I joined as replacement bass player when Mike Taylor moved on to become the band's visualist. I had lived with the singer, French born Matt Coe, on and off for years, who, though admittedly tone deaf, had a knack for pop hooks. He asked me to join, even though he described the band I had been in since I was 13 as "maybe not music." (Editor's note: that would be THE TERRIBLES) Differences aside, we were really tight friends, and we even lived in a shack together and I liked the band, so I enthusiastically joined. The frustrating part to me is I had never really played three chord pop at this time and had no understanding of musical chord progressions, so I would constantly get mixed up moving around the same part of the fret board and get songs confused. Rounding out the rhythm section was Dan Langlois. When I had met him when I was 14, he was the punkest person I had ever seen He even lived in a cabinet under the counter of a laundromat for a short time.

This demo was recorded at a practice space in Olneyville, I borrowed a car from a friend and got two parking tickets in about two hours. We ate breakfast at New York System Hot Weiners, where the home fries are just chopped up french fries (how appropriate). The whole tape is in French! And though I took it in high school, I'm still not really sure what he is singing about. I ended up having too much on my plate, the band got a new singer, became a four piece, and toured as "Frenching Action,", which is what people thought we were named anyway.

(Editor's note pt 2: I'm sure I massacred the spelling of the song titles, but so did their artist, Mike Taylor. I never took French lessons and Mike explains on the tape insert, "I don't speak French and Matt has handwriting like a little baby chicken."

(Editor's note pt 3: Don't ask me what happened to the font sizes on this entry. I tried to fix it and it didn't work. Whatever. Blogspot has a horrendous editing program that defies all logic.)

Download FRENCH IN ACTION
Link updated Dec 2017
Posted by Harvester at 10:56 AM

Any chance you could reupload this?

Really wish I could find this. Any chance you still have it?