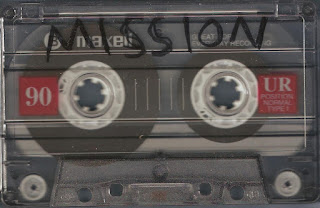 This might possibly be the weirdest post on the blog thus far because it's not music and it's not a story, but then again, it's its own story. Let me explain....
Back when I lived in Indiana, I would try to work on projects late at night, like writing, drawing, reading or sewing together a weird stuffed animal that made growling sounds and had a contact mic inside of it. Most of the time, my house and neighborhood were quiet...eerily quiet. It was so quiet that if I had my window open, I could hear someone's footsteps walking down my street from a block away. I could listen to music, but when I was writing, I found it to be too distracting. I just wished that I had a recording of street sounds to play in the background of my room; something a little ambient and somber. Specifically, I wanted any of my friends in San Francisco to record themselves walking down Mission Street from 24th Street all the way to 16th Street, which is one of my favorite corridors in the city. I wanted to hear the street vendors selling DVD's of movies that were still in the theaters. I wanted to hear the sounds of mariachi music, the buses, people speaking Spanish and the general sounds of a vibrant city. Much like my requests for anyone to ship a Cancun burrito to me overnight, this tape was denied as well. It wasn't until I made my way to the city that I was able to make this tape, even though I can now just open my window and hear it live, 24 hours a day. Maybe this will be welcome to someone else who lives in a small town in the middle of nowhere. Maybe I just outed myself as a total fucking wingnut who doesn't make any sense. Either way, whatever.
The tape starts out underground at the BART station at 24th and Mission and continues as I ride the escalator up to street level. It continues as I cross Mission Street and head north towards 16th Street. It ends with a lap around both plazas at the 16th and Mission BART station. It's just insanely exciting, I swear. Put it on in the background...or don't.

First three minutes are a little rough because I didn't realize the tape recorder was so creaky. It gets better.
Posted by Harvester at 10:59 PM

Not weird at all. I used to (and still do, though nowadays more in cypress swamps than city streets) fill up tape after tape with open recordings of my favorite towns that I loved traveling to. What's potentially strange is how easy it is to figure out where most of the recordings were taken. Max from the old S.F. band SCOBBLE put out several tapes of minimal guitar playing or fucked up, but also minimal noise over soundscapes of 24th st. that functioned as a sort of comfort niche as background noise when I've needed to focus, or just really missed the city. Anyway, glad you shared this.

i'm only a few minutes in, and this is already my jam. thanks so much, man!

I've been doing this too lately - in the summer I would walk through the weekly street festivals and record the horrid reggae bands while elbowing my way through crowds of douchebags on my way home, and then sit and capture the sounds of passing sirens from my porch. Now that's it's winter it's mostly the sound of wind whipping through the half-finished house frame across the street and garbage blowing around in the intersection.

my friend did this for me when i moved away from minneapolis for the first time. it had sounds of the bike thorough way, river, lake street, chicago-lake liquor store, etc etc. thanks for sharing!

do you by any chance still have this file? the mediafire link is dead

if anyone has this file please email it to cavscotthb@gmail.com