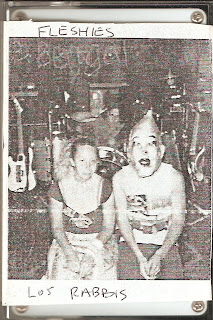 I really don't even know where to begin with this one. I'll just start with LOS RABBIS. They were a band comprised of four cool kids from the burbs (I'm guessing) of San Francisco...you know, some fuckin' know-it-all from here could probably write this better than me, because I don't know all the facts...but when has that stopped me before? Anyhow, LOS RABBIS used to come by Mission Records (a now defunct record store in the Mission neighborhood of SF) and buy anything HICKEY-related. They worshiped at the altar of HICKEY, 50 MILLION and THE MELVINS. They once went into a studio to record their only LP and, when it was done, they thought "This doesn't sound like us. It sounds too slick." So, they re-recorded the entire thing in their bedroom on a 4 track, released the LP with those recordings and entitled it "The Bible Pt II". (Big hint: If you ever see that LP anywhere, pick it up without hesitation. In my opinion, it is phenomenal and an often overlooked piece of Bay Area punk history.) Besides releasing things on one off tapes or just dubbing tapes for their friends (I literally chased one of the members down Shattuck Ave in Berkeley on a skateboard once to beg him to make me a tape of all of their songs), that LP was their only "proper" release. Their three songs on this tape were intended to be on a split 7" with FLESHIES on S.P.A.M. Records, but the funds never came through. It even made it as far as getting to the test pressing stage (which means there are three of these records in existence, according to John of FLESHIES), but never all the way to being a finished product. It's a shame. I like these songs a lot...especially their last one.
FLESHIES were (are) another great band of geeks from the Bay Area and a whole lot has been written about them in the past, so I'm going to keep it short. I will tell you this, though. I was visiting the Bay Area once before I moved back out here and FLESHIES were playing a bigger, sold out bar show where the door price was $12. They had "signed" to Alternative Tentacles and I wasn't sure what that meant. Had they sold out? Were they a weird money grubbing band now? Being a young, judgmental, DIY punk, I had a lot of questions. I went to their show, climbed the back wall, swung into a dressing room Indiana Jones-style and I was in! I casually walked through the crowd and ran into John. He hugged me and asked "Did you actually pay to get into this show?!" I was unsure of what to say. I decided to just go for it and said "No. This show is too expensive to just see local bands." John agreed with me and said he was happy I made it in. It wasn't weird. He didn't care that I snuck into his show. Score 1 for FLESHIES. Turns out that the show was some sort of label showcase something-or-other blah blah blah. I don't know or care. What I do know is that 30 seconds into their first song, John was already in the middle of the audience, singing in people's faces and freaking out squares. It was a great show, but I'm still glad I didn't pay for it. FLESHIES, if you ever need $12, I got your back. (actually, I already gave their drummer, Hammy $50 for a cymbal once.)
Their two songs, like most other FLESHIES songs are flawless. This record never came out, but these two songs made it onto two different compilations. "Death Of A Peckerwood" appeared on the MRR compilation, "Noise Ordinance", which is still in print and available from Maximum Rock N Roll. The other, "No The, Just Fleshies" appeared on a comp CD of their singles and other assorted rarities, which is available from Life Is Abuse.

LOS RABBIS went on to many, many other musical projects, which you will be seeing a lot of in the coming weeks. Most of them have been criminally under-documented. If anyone has a digital copy of the LOS RABBIS LP that they would like to share with the world, I will gladly put it up here.
FLESHIES are still FLESHIES. Older, wiser, less drug-fueled, still relevant.


This tape comes from deep within a brown paper sack left for me by Mike Wilson on the floor of a grimy record store. Expect more from this mysterious bag.
Thanks to John March Mink for extra info.
Posted by Harvester at 12:13 AM

Hey Greg! Thanks. I have a copy of The Bible Pt II on CD, that came with my copy of the LP. I will go dig that up today and get it to ya..

of course Mike has it. anything weird and awesome, that kid finds.

Could you re-upload this one? Thanks so much for posting this!

I can! and it's done! and you're welcome!