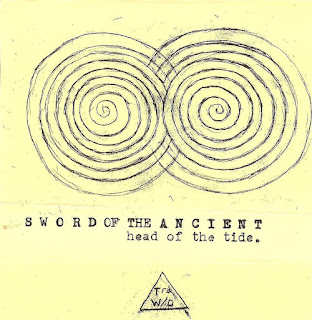 Many of the sounds I put on here are harsh, abrasive, fucked up, angry and defiant...because I like that kind of music. I also like sounds that are beautiful, indescribable, meditative, experimental and noisy. That is where bands like SWORD OF THE ANCIENT come in. But first I have to ask myself, "Are there other bands like SWORD OF THE ANCIENT?" Some of you may remember when I posted their first tape over a year ago. This tape finds the band stripped of one member, moved over 15 states away from their former home of New Orleans, a lot more subdued and a little more lush, but still strange, hypnotic and captivating. Some of the moments on here sound like they could have come straight out of the brains that wrote the first RESIDENTS record. In addition to changing their locale from a harsh, violent city to a beautifully calm seaside village (which sounds evident in their sound), it also sounds like the band switched from coffee to drinking loads of tea between their two tapes. It works. I think this tape sounds best driving across eastern Montana at 4am when everyone else in the car (van, truck, etc) is asleep or at home alone in the dark, but you can do whatever you want. 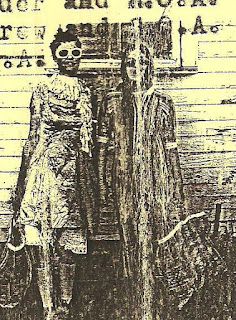 Download SWORD OF THE ANCIENT
Updated 2013
Posted by Harvester at 5:54 AM

Such a good one.

This is indeed an enjoyable listen. I'll give it another go walking the dog. Thanks for sharing the music.