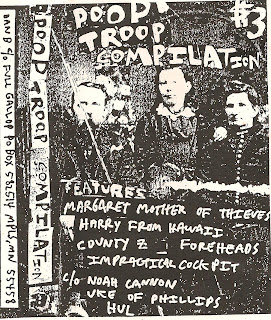 This tape was compiled by Dan B (of IMPRACTICAL COCKPIT and VILLAGE OF SPACES) to showcase some of his and friends' bands who play noise, outsider sounds, lo-fi dance music, drone, punk and more. The physical tape starts off with MARGARET MOTHER OF THIEVES, but I didn't add them on this download since it's just the same songs from their demo, which you can find by clicking on that link above. So, your download starts with COUNTY Z, who are still one of my favorite bands of all time. Their one and only song on this comp sounds like it was a rehearsal improv jam and it is a definite "work on some stuff in your room and let this drift out of the speakers" kind of song. They are followed by HARRY FROM HAWAII, who drone out some fucked up, blown out "dance music" for total fuckin freaks. The one time I saw them (I think it was them), they featured Drew on noise. He was wearing a full-body foam outfit with a huge helmet made out of sheet metal with contact mics all over him. The mics were running through an overflowing table full of pedals and Drew was banging on the helmet with drumsticks. I found out later that the  jagged edges of metal were cutting into his head the whole time and that his jumps and hops were not for effect, but were produced out of sheer pain!
Next up is IMPRACTICAL COCKPIT (another all time favorite) who also jam it out for a bit in that improv, droney way that they do. Dan B told me that they have hours of this stuff on tape somewhere. They are followed by UKE OF PHILLIPS (who has evolved into VILLAGE OF SPACES) and their brand of gutter-country/acoustic-noise. New Orleans' THE FOREHEADS play 3 songs that are the closest you will get to a standard punk band on this tape, even though nothing about them is standard. Occasional IPCP member, Stella plays guitar and yelps some vocals here and there. Merrydeth plays drums and does a fair share of the singing. Icky rounds out the rhythm section on tuba. They did a tour or two (I would've loved to have been their roadie) and put out a split 7" with THE NAZIS FROM MARS on Raw Sugar Records before breaking up.
HUL (not to be confused with the Danish band HUL) is just Don Godwin (of IPCP, Vector Set and much more) playing sleepy, lo-fi electronic music. Two of these songs were recorded in a Motel 6 in Lubbock, Texas. C/O NOAH CANNON closes out the tape with a mess of drone, noise, soundscapes, tape manipulation and more. I have a 90 minute tape of theirs and like the stuff on this comp, it can be meditative and wash over you.
Most of this tape will not sit well with many of the people who like the bulk of the stuff I put up on this blog, but that's okay. This is my trip. Get into it. Plus, I'm still getting over being sick and sometimes you don't feel like excitedly writing about punks getting wasted and penning the best song ever about killing Marines. 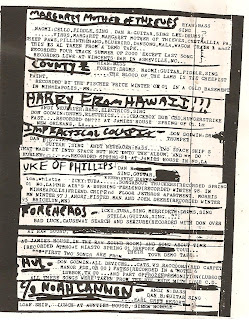 This is from the collection of Erick Lyle.
Posted by Harvester at 12:49 AM

GREG! Again, I love you. It made my mofo day to hear the Foreheads today.

LET THE RECORD SHOW: The band Don was in was called Set Vector.