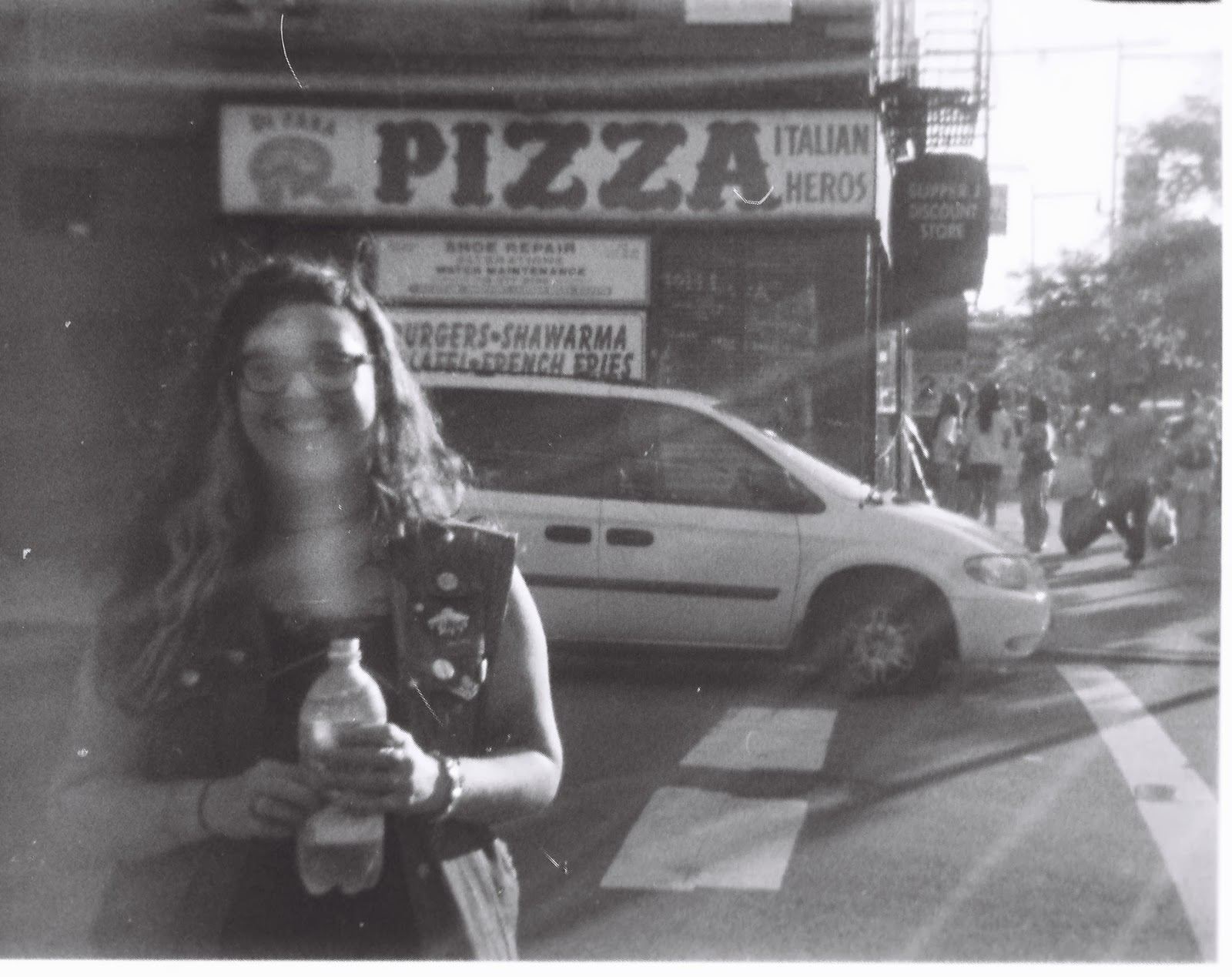 I don't see Laura often enough. We used to live in the same house and still never saw each other. Anyhow, Laura is awesome. She was part of the the collective, For The Birds, helps out with the Willie Mae Rock Camp For Girls, plays in a band (info below) that I'm sure is great and has been a source of inspiration to me in different ways.

HYSTERICS // IN SCHOOL at death by audio

this show was so fun!! both of these bands are so good!! in school is super tough, inspirational, smart hardcore. i wish they played more shows!!
i am obsessed with hysterics, they are just the perfect band. super fucking angry but also HILARIOUS and so fun to watch. i feel like everyone around me was just beaming throughout their whole set. pure rage met with pure joy! so stoked for their new 7"!!

i first heard molly play these songs in the summer of 2012, and i was blown away by the beautiful, haunting songs she had written, and how full and powerful her voice was! since then i have listened to her EP like...so many times, sometimes on repeat for like hours. getting to see her play again (with erica on cello!) after developing a relationship with her songs was really amazing. i feel like her music, in this very visceral way, shines a light on challenging emotions that are often left hidden. it is opening but not in a way that feels too depressing, kind of more like meditative and inspiring. it makes me feel proud of the many things that punk can be! hot tears just put a bunch of new songs up their bandcamp as i was writing this, and they are so good!!!

ok so whatever, this is my band. but i don't care! we had been practicing for over a year, so playing outside of our practice space felt like an accomplishment. we've all been friends for years and dont get to hang out much outside of practice, so we spent a lot of practice time this year hanging out, eating pizza, talking shit about work, making the best jokes. for a while i felt bad that we took so long to write songs and weren't more "productive" in practices, but like, i feel like that is some kind of brainwashed by capitalism bullshit. for sure, writing songs rules, but whats been more valuable to me has been getting to spend time doing a creative thing with some really smart and hilarious witchy punk babes. we don't have any anything on the internet to share, but here is maybe the only photo of us all together - being really in love with each other at jessy's wedding. 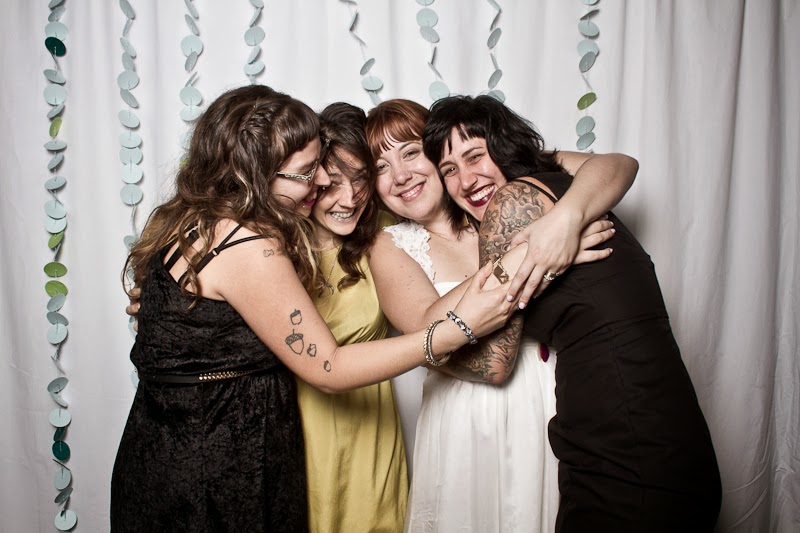 i've seen joe and mars play music together in different bands and in different cities for like the last 7 years. this is the first LP one of their bands has put out and it felt really emotional the day the boxes of records showed up at joe's house this spring, knowing how much work they had all put into it. something i really love about watching this band is i feel like you can see a lot about each of them as people in the way that they play: angie is really creative, energetic and fiery, mars is like..an understated badass, joe is thoughtful and pretty, and jade is dreamy yet fierce, and it all really shines through watching them! their songs are super tender but also totally tough in the way that its tough to share your tender queer freak stories! plus they write about things i can relate to, like wasting time in california, sex dreams, shit years, confusion, and (probably?) dogs.

i found out about this book from always reading imogens column in mrr, and always being like omg who is this hilarious genius?! i read the book in like two days and immediately lent it to my roommate, and then like 5 other people, then read it again, then gave a copy to my sister. it's so good! for me, this was the perfect balance of "omg yes exactly that!!!!" moments when you read something that really perfectly articulates feelings or ideas you have had, and "woah i hadn't thought about that in that way before". there's a million things on the internet that describe more about the plot and stuff way better than i would, so i'm just gonna say for now that its about a queer punk trans girl living in brooklyn and dealing with heartbreak and a shitty job, and you get to be there for a bunch of her inner monolouging through boredom, neurotic freak outs, and drunken epiphanies. i can't remember how old maria, the main character, is supposed to be in the book, but she's probably going through her saturn return. the book talks about a lot of things specific to maria being a trans woman, but does not set out to explain transitioning or trans experiences to cis readers. there are a lot of really super smart reflections about gender and sexuality and all of that, but they are woven into the story in a way that depicts really clearly how those things actually come up in day to day life, without always being the point of the story. anyway, i think everyone should read this!! AND imogen also wrote a realllyyyyyy good article about trans misogyny in punk and queer "communities"(barf!), specifically talking about people worshiping kathleen hanna despite her being totally not there for trans women. read it!!


limpwrist played two shows in new york this summer. both were amazing, but this one was way more tiny and intimate. obviously everyone knows limpwrist is awesome. they have been a band for over 10 years and are still super passionate and such a positive force!!!


THE BREEDERS at webster hall

ok i said this about hysterics, but whatever, the breeders are ALSO the perfect band! i saw them twice this year, in may and december. they played all of last splash, and pod! the best music made by working class weirdo sisters. this song totally killed me both times:


this is a performance by nath ann carrera and amber martin, in which they play witchy lovers both named isis black, who run a witch camp. i'm actually just going to paste their description because its perfect: Take a journey to WITCH CAMP where Amber Martin and Nath Ann Carrera transport you through drop-off, Learning Yurts, the pre-dawn camp favorite, "Morning Horses/Blood Sacrifice," and beyond, while ridding the room of chode intentions! Grab your baggie full of hair and your black latex glove and gather around the fireside for a battle cry against the patriarchal rape heads in this ONGOING inquisition!
they play a bunch of covers, including this led zepplin song that is sooooo amazing, and i totally fucking hate led zepplin! the video is from a short piece they did at the heels on wheels open toe peepshow, but they have since made it into a full length performance complete with a naked broomstick riding scene.


ok so rock camp showcases are always the best show of the year, but somehow this one was just like....on another level. it was a really emotional week with a lot of really intense stuff coming up with the campers i was working with, and coming out of it with a like totally fucking amazing showcase was like..such a victory. i cried like the whole time. this video is not the best quality, but seriously...this song rules..its by a band of 11-12 yr olds called HARSH CROWD (so punk!) who just went ahead and wrote a 8 minute song in one week of band practice. it starts out as this slow, quietish song with lyrics inspired by the Trayvon Martin tragedy, and in the middle they get all wild and come out with this song about rocking out. "i've got a bad attitude, and i don't care!". everyone kept describing the singer as getting all tina turner style, but i feel like the raspy vocals kept reminding me of soulful punk singers like gary floyd or something. plus the guitarist is wearing a penguin suit and the drummer has bunny ears. maybe they are all dressed like animals? i dunno. anyway, other highlights which are also on you tube are the band i coached, la luna, who were soooo awesome and supportive of each other, and another band that wrote a song about being the only watermelon in a canteloupe field, with a shouted chorus of "i will spit my seeds at you!!!"

ok this is another weird personal thing, but i have been studying medicinal herbalism for the past few years, and i feel like i still have a really long way to go and will be still learning by the time i'm like 80, but this year some weird/cool stuff started happening! like i started having dreams about plants to give to people, and they would turn out to be totally a good fit! or like, i went on this trip upstate with some witchy queers and felt really pulled toward some of the plants out there that i had never seen before, and it turned out to be things that i was taking in a flower essence formula! it was really clearly this kind of communication that i haven't experienced before. i dunno what to tell you man, but it's real! this picture is of me with blue vervain, which is a good remedy for people who are intensely driven by ideals to the point of exhausting their bodies, and exhausting other people, which makes me think about activist burnout or if you are one of those people that's always putting themself in charge of a million projects. also indicated for people who feel an urge to "bathe in blood" the week before their period. woah. 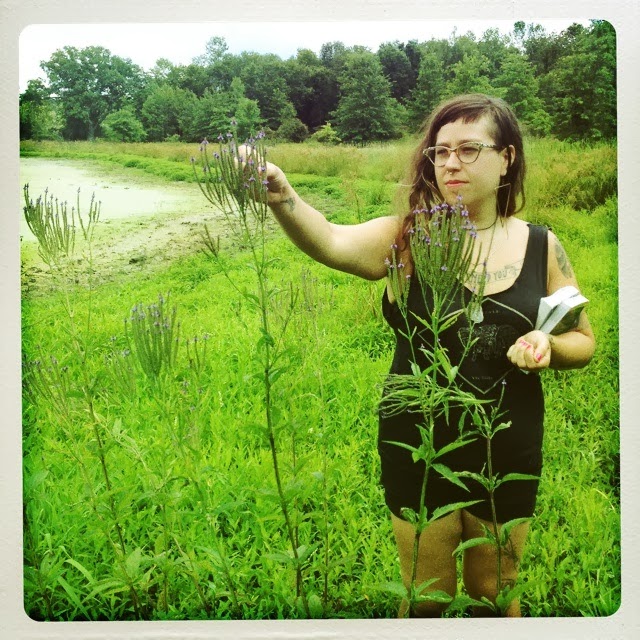