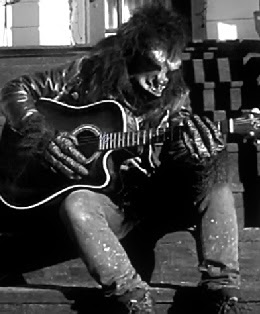 Well, it's that time of year again...now that 2014 has shown its face, it'd time to talk about the things that we all liked in 2013. I have chosen a wide array of friends to share their top ten lists with the world and I'll be rolling those out over the next couple of weeks. First up is Blair Menace (pictured above). Blair lives in the hills of North Carolina, plays in SWAMP APE and BLOOD SUMMER, steers the ship over at Menace and has been my friend longer than some of you have been alive. Here he is with his top ten of the year.

Here we have spooky, dubby, haunted house rock that oozes out of your speakers like ectoplasm.  Stinging spaghetti western guitars, detuned harpsichord, broken drum machines, and an ineffable aura of seasickness and regret tie together these disparate recordings pieced together from various releases over the last couple of years.  This doesn't feel like a compilation though, more like a transmission from another plane, crackling through time and space.

Moving mostly at a funereal plod, this hypnotic little beast of a record still makes my skin crawl.  I didn't like it at first, after the stark simplicity of her earlier stuff, but the suffocating atmosphere and thick, lazy pulse that beats beneath the surface of the album kept drawing me back.  This is music for watching the tide go out, waiting for something to slither up the shore.

A man after my own heart, Ka produces, mixes, releases and sells his own music, makes his own videos, and exists entirely outside any scene or rap sub-genre.  I mean literally, you can find him on street corners, hawking his record next to the guys selling bootleg dvds and handbags.  The Night's Gambit is a low-key, bleary eyed album that sound all the more menacing and psychedelic in the absence of normal hip-hop bombast.  They say it's the quiet ones you need to watch.

Trippy, Lisa Frank space metal from Finland.  Oranssi Pazuzu (that's “Orange Wind Demon”) present a baffling, writhing mass of music that flails around wildly and never really settles in one place for long.  The guitar tones are some of the nastiest I've ever heard, and the vocals are gleefully repellant, but the real mind-bender is the black hole synth sound swirling at the center of it.  It's weird for music to be this intentionally ugly and impenetrable while also being so foppishly tongue-in-cheek, but that's what separates this band from its pretentious peers – a sort of end-of-the-world willingness to laugh it up while gravity fails and the lights go out.

I don't even know what the hell this kind of music is called: twisty, echoed guitars stabbing through layers of junk percussion and chopped-up vocal gibberish, warbling up out of nothing like a bad dream.  There's a sort of pastoral calm shot through with suppressed panic, like the first Suicide album, or perhaps if Springsteen's Nebraska was instead called Stonehenge and composed with a drum machine and bunch of scratchy classical records instead of a guitar.

There's literally no way for me to talk about Summoning without sounding like a huge nerd, so let's just lay the cards on the table.  This is an album of martial synth folk music from a two man black metal band that only sings about Lord of the Rings.  If you just want to stop reading here, I'll understand, but I genuinely love this band without a trace of irony.  Something about the timbre of the cheesy synth strings, the robotic timpanis, the raspy troll vocals, and the tinny guitars and flutes just speaks to my inner Beastmaster.  This is what I listen to when I stand shirtless on my porch on misty mornings, waving the broom around like a sword and basking in the rays of the rising sun.

Another year, another dark, window-rattling trip into Black Milk's tortured psyche and funky record collection.  Sample-based and old fashioned without sounding retro or corny, and brimming with bad vibes and hard times without being a bummer, Black Milk once again effortlessly juggles contradictions to produce something harder, meaner, and smarter than anybody else in the business. Plus the drums hit like cartoon anvils.


My scientific endeavors in the world of reverb led me to a lot of weird places this year, including hollering into my own washing machine and purchasing slinkies in large quantities.  One thing I discovered in my explorations was this album, which is about 10% gently strummed acoustic guitar and murmured siren vocals, and 90% reverberation.  The whole thing sounds like it was recorded in a missile silo, or a tyrannosaurus skull.  Phasing between lucidity and abstraction, intimacy and distance, this album dominated the quieter moments this year.  It still rattles around in my head sometimes.

Here we are approaching 2014, and (arguably) the best and most important Punk Movie is now a part of the lofty Criterion Collection, with liner notes by Sam McPheeters and a blank white DVD labeled “Disc”.  Hopefully I don't need to elaborate too much on the righteousness of this film, but this is a beautiful looking remaster that reminded me of how much impact Repo Man had when I first saw it all those years ago.

Crap, I can't believe I forgot the Vhöl record...