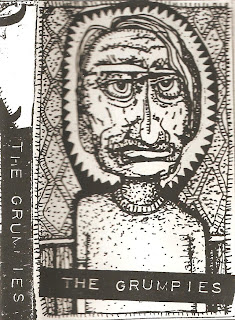 Longtime readers of this blog may ask "Haven't you already uploaded this demo?" The answer would be "Yes...sort of". I have a confession to make. I lied to all of you. The GRUMPIES Demo that I posted back in June of 2011 was not the actual tape I got in the mail from my friend, Angie in 1996. That post was the second or third thing I ever did on this blog and I was pretty sure no one would ever read or pay attention to anything I ever said on here. Now, I realize that there are quite a few people who read this thing and my need for truth and accountability has become weirdly overwhelming. The tape that Angie sent me was the one that is now contained in this download.
Back in early 1996, THE GRUMPIES formed in Starkville, MS out of the ashes of the legendary (to me and a few others, anyway) WHITE TRASH SUPERMAN to play some hyperfast, manic pop-punk that went beyond that simple genre description and attempted to define their own way of being. Maybe it was growing up in Mississippi. Maybe it was massive doses of early FLAMING LIPS records and seeing hair metal bands in barns. Maybe it was drugs. I don't know. What I do know is that THE GRUMPIES were doing something that was different and all their own. They managed to wear their influences firmly on their sleeves without sounding like any of them. I love them and when their drummer quit, I jumped at the chance of being in the band...partly because of this tape. 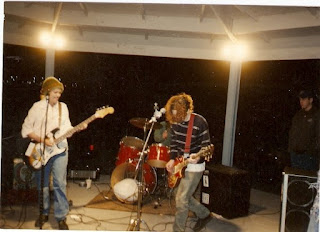 THE GRUMPIES playing at the gazebo in Huntsville,AL 1996.

So, the tape...They recorded this demo at their house in Starkville on a four track and then played a couple of shows in Mississippi and Birmingham (where my friend Angie picked it up). After those shows, they decided that they could probably do a better job, re-recorded every song on the demo (same house and same four track as far as I know), added some samples and voila, that is the demo that is more well known and widely available. This one is a lot more rough and rudimentary, but I always liked it a lot too, especially this slower version of "Weather Girl" and Vince's back-up vocals on "In My Past".  If you've never heard this band before, I suggest you follow the link above for the "official" demo and try that one. If you're already a fan, this will be interesting for you.

I don't have audio tapes, but I have a whole show on DVD from L.A. It's actually pretty boring, but good sound quality. IF I ever take the time to learn how to upload video, I'll put some of it on Youtube. It's from this same show http://www.youtube.com/watch?v=q99fkFwmPok
I also have terrible sounding practice tapes.

do you have DVD burning capabilities by chance? if so i can send you a blank DVD-r and some postage and you could burn the DVD of that Grumpies live show. let me know what you can do!

I don't, but it is one of my future priorities to put this stuff online. Like I said, it's not that exciting and I have much more exciting videos to put up in the future.

Oh man, I hope one of them is that Mummies public access show. I've looked for a copy of that for years.

I'm lovin' Cicatriz Amalaya, by the way - thanks for that one.

Blair, Joey Tampon "borrowed" that video from me years ago and "lost it". Such a big loss! There are clips of that show on Youtube, but the sound is not sync'ed up that well. It's annoying.

I don't know if you remember me, but The Grumpies stayed with me for a few days in Ft. Collins, CO in the fall of 1998. I was supposed to get you guys a show, but everything fell apart. I had these recordings you all did in California I got from a friend at Recess. The recordings that were supposed to become Who Ate Stinky. My having these caused an upset I think. Anyway, I still have these and was wondering if you wanted them? Who Ate Stinky became something totally different than these recordings. These versions of these songs were amazing. I don't want to write too much here, but couldn't find an address to write to you at. Anyway, you can email me if you want. vespawood at yahoo.com

Hi! Can you reupload this demo? Thanks in advance!