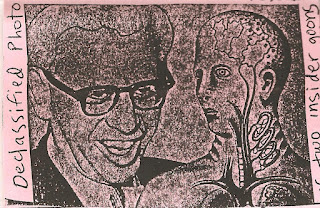 My band played a show with the BLACK LUNG BRASS BAND back in 2003 in Chattanooga. I wasn't sure what to expect. I wasn't even sure if they were a brass band. What if they were just one of those annoying ironic bands like BLACK LADIES...a band that does not have that literal element in their band?Well, it turns out that they were a brass band and they were also my friends from Asheville. Luckily, none of them had black lung. They all piled out (all 11 or 12 of them, clown-car style) of a truck and started pulling all of their instruments out of a tangled mess in their trailer. When they took the stage (well, the room actually...there was no stage), they were a loud, blasting force to be reckoned with. They sounded like a loud-ass, multidisciplinary brass band. I mean, what else can I tell you? You either like this kind of stuff or you don't.
A year later, I convinced my friend, Sarah Monster to drive down to Louisville, KY to see them play in a park. I was sure that there would be a million people there and it would be really cool. There was more like 10 people there and the show was awkward and weird, but the BLACK LUNG BRASS BAND was great. I found out that they had 3 days off before they needed to be in Chicago, so I convinced them to come stay at my house and play a show in Bloomington. We all left separately that night and made plans to meet up at my house in Indiana. Twenty minutes into the drive, Sarah and I noticed that the weather was beginning to look insanely ominous...dark clouds, high winds, a high-pitched whine. I knew from my years of growing up in the deep south that we needed to get into a ditch or risk being sucked up into a tornado. Oddly, we were driving through the town of Floyd's Knob and Sarah exclaimed, "I have family here!" To make a long story short, we made it to her relative's house and got to see some trees being blown over. It was the pre-cell phone days for most of us still, so I was worried about the brass band. I found out later that they pulled over at a motel, got free rooms from the family who lived there and rescued a stray dog from the storm.
Let me get to the point. I bought their tape and it was great. I was listening to it while screening shirts and getting ready for tour. I let side two keep running after the music was done because I was busy. After a few minutes of silence, I heard the beautiful strains of a solo piano and got excited. A hidden track! The next few minutes were spent in awe. I must have rewound the tape and listened to that song 5 times in a row while the ink for my shirts was drying in the screen. I laid on the floor and smiled. Seriously, even if you don't give a fuck about this kind of music, I highly recommend that you download this for the last song. It's one of my favorite things ever.
As far as the track listing goes, it's all over the place. When I put this in to digitize it, the tape broke!! I realized that Crab Jackson had put this on a tape for me years ago, so I digitized that one...but the song titles don't match up and...it's a long story. Don't worry about the titles. I think this is a great band..beautiful people. True freaks.

THE FILE WAS DELETED ON MEDIA FIRE - COULD YOU UPLOADED IT SOMEWHERE ELSE OR UST ON YOUTUBE?

How about you just download it at the link above? I fixed it.

Oooh I just found this one! My tape died eons ago.. ferner