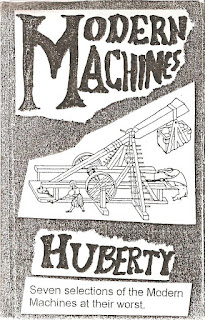 The Modern Machines were a revelation to many and a thorn in the side to many more. I count myself in the population of the latter, but I am including them here because what would the early 00's have been without them? What other band would have shown up at a show in Pittsburgh unannounced (after they had a previous show 24 hours earlier in Denver), jumped onto the show already in progress, played for 45 minutes (including 2-3 later REPLACEMENTS songs) and then kept you up all night drinking and playing even more REPLACEMENTS songs on the porch? I mean, besides BENT OUTTA SHAPE? As much as I didn't like their band and as much as they purposefully annoyed people, I have to hand it to the MOMACS for being total fucking troopers. In the face of adversity and straight-up hostility from audience members at times, they appeared oblivious and impervious to outside forces. They toured relentlessly in a beat up, little minivan, often bringing along their drunk friends from Milwaukee, even though they didn't have room for them. They covered hundreds and hundreds of miles in a single day and stepped out of the van, ready to play their hearts out to 10 unenthusiastic kids in the middle of nowhere and act like they were selling out fucking Shea Stadium every night. None of this changes how I feel about their band, but I can say now that I respect them and I think they are good people. Sometimes, it doesn't matter what your band sounds like when your intentions are this direct. (Also, does my opinion matter? Many people loved this band.)
This tape is from 2002 and is a little confusing to me. According to the insert, all of this is first take stuff....there is even a LEMONHEADS cover. Here's the MODERN MACHINES to tell you about it in their own way: 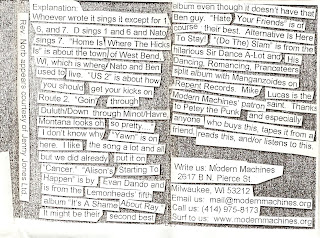 File has been deleted, but you can download it here now, along with 3 other tapes by the band.
From the collection of Erick Lyle.
Posted by Harvester at 12:01 PM

Modern Machines were always hit or miss with me, although overall I think they were a pretty awesome band. Their split with Blotto is still a classic in my book. And coming out of the 90s I'm glad it was more Replacements than Screeching Weasel. Not knocking SW but it seemed like every pop punk band was doing that sort of thing.

I'm always glad it was more Replacements that SW...and I will always knock SW...except for the Punk House 7" and the first song on "Wiggle".

Haha, what a perfect summary of this band. I saw a couple of shows where I'm almost positive Bent Outta Shape and these guys were trying to out-obnoxious each other. Modern Machines played many many useless covers but Bent Outta Shape once played "Beast of Burden" three or four times in a row, so they probably won.

i remember when these kids showed up at mission records, they were obsessed with hickey and just had to go eat at el farolito because of that song, then they came back to the store and we told them the song was written about the OTHER farolito, on 24th st, just to see if they'd go there and eat another burrito, and they totally did.