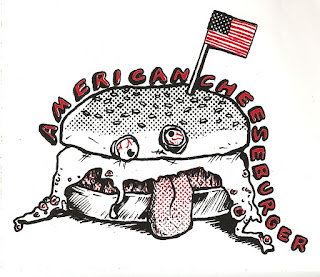 Ever since I met Jason (wild haired drummer guy in this band) back in 1995 (96?), he has been playing his style of no-slow-all-go hardcore relentlessly in bands like TRES KIDS and NINE SHOCKS TERROR. When one of his bands breaks up, he seems to already be working on the first demo for the next one. If we're thinking chronologically, I believe AMERICAN CHEESEBURGER was born not too long after the demise of NO and finds the band fronted by James, one of my favorite hardcore singers of all time...who you may remember from DIVORCE, GOAT SHANTY and HALFULA. Those two teamed up with Jon, formerly of CARRIE NATIONS and Steve from ...uh...I'm sure he played in some good band but I don't know what it was. Anyway, they all got together and churned out this fucking 6 song, raging demo that kicked off their 5 (?) years as a band, pulling influences from C.O.C., Japanese thrash and a bunch of other crazy shit. Go for it, freezer eagle. 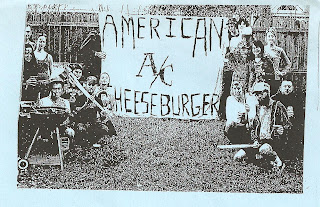 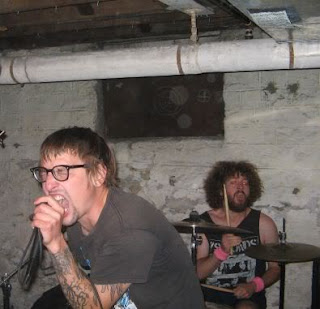 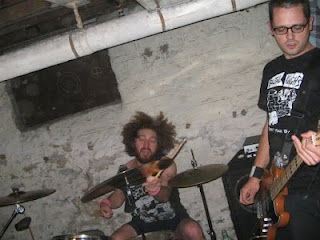 Live photos taken in Cincinnati by Jon Douds.
Posted by Harvester at 11:39 AM

American Cheeseburger played in Vancouver around 5 or 6 years ago (maybe more, memory, what's that?) with Chuck Norris, at a now defunct space that had pool tables and vending machines. Anyway, I bought a demo and a shirt, and when I unrolled the shirt, I realized it had not only been pissed on, but pissed on and then rolled up and taped. So punk?

Whoa!That's pretty funny. Joe, their bass player, said that if you write him, he'll send you one without a piss stain and some stuff by their new band, Shaved Christ.joedakin77@yahoo.com

American Cheeseburger played here (Cincinnati) back in about 2006. I was lucky enough to see them. I brought along a friend who knows next to nothing about "punk rock" and has no real interest in it, but went along anyway for what he said "the experience". He was blown away and ended up buying a teeshirt/7 ". it's funny to think a guy who now works for the IRS has an American Cheeseburger record.

Anyway, I've got a couple photos from this show, if you'd like to see them. I figured 1 or 2 might look ok on your site. I'll send you a couple and see what you think. Hope all is well in the Bay.

I used some of the photos. Thanks!

Link is fixed. The reason why many of these links don't work is because Mediafire suspended my account and I basically had to start over. Sorry for the inconvenience.

thanks for the demo. i used to live with steve in athens back in 2007 or 2008-ish, solid guy. his wife at the time was the fucking worst, though. thankfully he wised up.