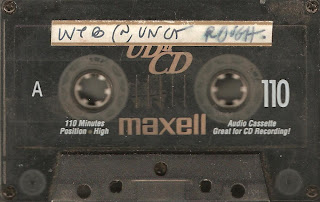 I moved to Asheville, NC for a short time back in 1999 and lived in a huge, dilapidated, musty, drafty, pink punk house on the edge of downtown. There was a library on the main floor, a screen printing set-up, couches for drunk crusties to sleep on, a couple of shacks in the backyard, 15 roommates, a show space in the basement and the landlord was one of the guys from CRASH WORSHIP. I was kind of obsessed with an old Asheville band called EXCESSIVE DEFIANCE and I usually listened to them every day when I woke up. Someone told me that I should listen to WAR TORN BABIES, which carried on the legacy of E.D.'s simple, noisy barrage of crust. I asked a couple of friends about them and soon found out that two of my roommates were in that band. Soon enough, they were playing a show in the basement. 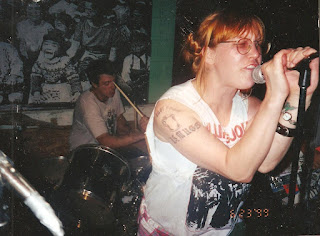 They started up with a distorted, fucked up bass tone and crashed haphazardly into their first song. I didn't get it. Everyone was dancing and singing along, but I felt out of place on the sidelines. Their drummer was possibly older than me, but played the same way that I did when I was 13. Each of their songs seemed to fall apart, but no one cared. Everyone just danced harder and sang louder. Then, it hit me. I began their set thinking that that they had no idea what they were doing, but then I realized that they knew exactly what they were doing. All of their songs were primal, plodding, visceral, simple and working towards an easily memorable chorus that you could sing along with the first time that you heard it. It dawned on me that this band was genius and by the end of their set, I was up front, fists in the air, singing along to "Dancing On The Ruins Of Multinational Corporations!!!"
As far as I know, WAR TORN BABIES never released anything...I don't even think they ever got around to releasing this tape, but I could be wrong since I moved away from Asheville and lost touch. All I know is that they (probably) recorded this tape at UNCA in Asheville and then their guitarist, Ed left it in my room. Did it ever get mixed, mastered and released? Until we find out, here is this rough mix of their stuff at it's most primal and raw. 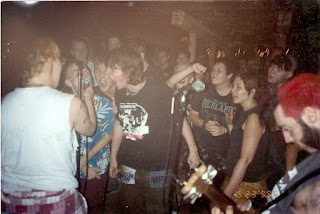 Both photos by Chrissie at the Pink House in Asheville.
Download WAR TORN BABIES
Some might think that a band might not want their unmixed recording out there for people to consume, but I asked their singer Mikki if it was okay and she said "DO IT!!" Speaking of Mikki, she now runs a bar called the Get Down, that is  the best place to play shows in Asheville these days. They are going through some rough financial times at the moment, so if you want to donate money to them, it would be very appreciated. It's run by some great people, they have an awesome sound system and their politics are rock solid. You can find more info about them here or you can make a donation straight to them on their Paypal page.
Posted by Harvester at 12:08 PM

I think you're right - this was never released. At least, I've never seen or heard a finished copy. They had a few live tracks on that "Everything Went Pink" tape but that's it as far as I know.

Aw, geez. I was old then and I'm older now. The download links are busted and I'm bummed because I miss the sounds of Asheville from back then. I think I've even got pics from some of the shows, somewhere.

I just downloaded it with no problem. Try again.

The funny thingis, I was older than all of them

But were you older than me?