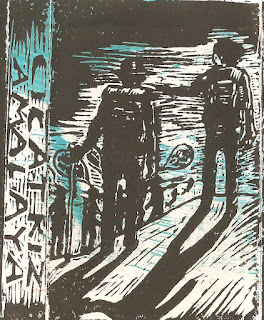 If you were to ask me anything about the origins and ideas behind Cumbia music, I would tell you to ask someone else, because I know next to nothing about it. For example, when I moved back to the Bay Area in 2008, I got a job at a screen printing shop in the East Bay and spent most of my shifts listening to KALX, the Berkeley student radio station. Lots of times, they played punk, but there was a show where the DJ often spoke highly of cumbia and bands influenced by that style of music. If I were to base my definition of cumbia solely on the musical choices of that DJ, I would believe that it is a style of music played by hip, white SoCal dudes who's main goal is to be written up on Pitchfork and open up for OZOMATLI at Coachella. I now know that, for the most part, that definition is wrong. If you want to know what it is, you can look it up on the internet for yourself. Like I said, I'm not the cumbia guy. 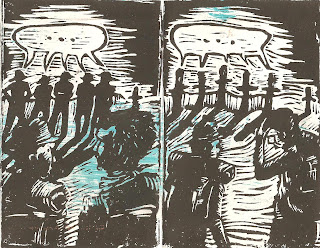 This tape was thrown in with my order of records from Trd Wrd and I was pleasantly surprised by it. It helped me to realize that cumbia was not only the playground of the upwardly mobile, adult contemporary, auto-tuned burner-dude with a funny hat, but it could also be sorta raw, organic and wild...kinda like punk...although cumbia predates punk by roughly 100 years. According to the insert of this tape, "CICATRIZ AMALAYA is a seed of a band of novice instrumentalists attempting to play some kind of cumbia music inspired by the Discos Fuentes compilation released by Domino Sound. An obsession with that tape, coupled with a chance meeting of two Mexican traveling kids and six Pittsburghers initiated this friendship and this recording. The songs on this tape were written and interpreted over the course of a month and a half in the summer of 2009 in Pittsburgh, PA. what a great time!" (...and here it is in Spanish). 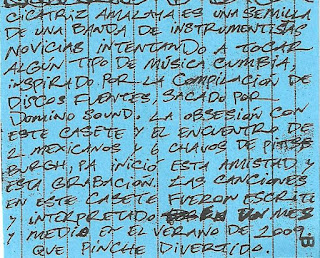 It sounds like a great time. Listen for yourself.
Download CICATRIZ AMALAYA
WARNING: The first five seconds sound like garbage because the tape's a little messed up, but the rest of it is fine, I swear.
Posted by Harvester at 12:50 AM