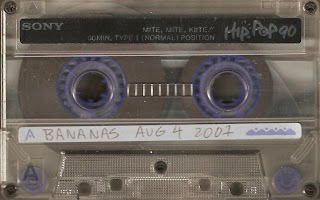 As of this year, THE BANANAS have been a band for twenty goddamn years! That's longer than DEAD MOON and SHOTWELL. Their band is older than many of their fans. That shit is weird. It's been said before, but one reason for their longevity is that the band is probably just too lazy to break up. Sometimes, they even seem too lazy to play a show, as evidenced by the fact that lately, they usually play no more than 3 or 4 times a year. When they do manage to drag their asses to a show, it can either be gloriously life-affirming, a drunken chaotic trainwreck or a gloriously life-affirming, drunken, chaotic trainwreck. I've seen them countless times now; from raging, super-tight basement shows to long, drawn out, 3 am wasted slop-fests. One thing remains consistent though. They've always been entertaining and I've never once walked out before their set was finished. Even when they are bad, they are usually better and have more hooks than every other band on the show.
This tape finds the band at a show back in 2001, teetering on the edge of being a little too drunk to play, but they manage to shambolically plow through their set and keep people entertained. There is the prerequisite 2-5 minute break between each song where Mike and Scott trade jabs with the audience and each other...which makes for a 45 minute set consisting of only 12 three minute songs. I'm not saying it's bad, because it isn't. I'm just warning you what you're in for.
"This next song is about biting people in the butt! It's pretty good! It's a political song!" - Mike
"...Political in the traditional sense..." - Scott

This tape is loaned out by Sarah T.
The quality isn't the best, but it's the thought that counts.
Posted by Harvester at 11:17 PM

Greg, none of the download links work for me. Is this unique to Canadian internet?

Missing Out On Mediafire.

weird. I just tried it and it worked. Maybe mediafire hates Canada.

Okay, got it to work. Stoked!