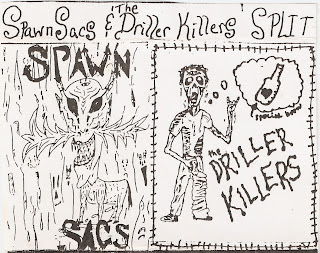 The SPAWN SACS were a fucking trainwreck. Hell, they were two trains colliding into each other, going backwards. They would pass out dead drunk before they played, shit their pants while playing, and give each other blurry tattoos while blacked out at 8 am. They would cover "Blow Up The Embassy" by the FEARLESS IRANIANS FROM HELL and I would get to witness a roomful of the people I love screaming "I wanna kill myself! I wanna lie dead on the floor! It's none of your fuckin' business what I live and die for!". They would try to cram 20 chords into a minute and a half punk song and make it sound mind-blowing. They would dumpster chicken from KFC on tour, reheat it on a grill at someone's house, eat it and shit their pants again. Fueled by stolen whiskey and crappy jobs, the SPAWN SACS migrated south from Michigan to Miami  and then on to Dalton and finally came to a halt in Chattanooga, leaving a trail of shotgunned beers and a lot of broken shit in their wake. Like most bands from the 90's with no money and no thoughts of self-preservation, they did not shell out the money for studio magic. The Spawn Sacs sound best on shitty stereos, playing fast as fuck and screaming their lungs out. This tape will probably not win them any new fans in 2011, but I'm sure they don't give a fuck. 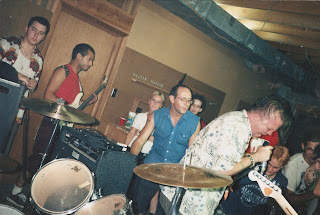 The DRILLER KILLERS were pissed and drunk as well, in a different way. Rather than direct their venom at society and religion, the DRILLER KILLERS seemed to have an almost singular vision of B-movie worship and destroying Hollywood. The lyrics to "Malibu is Burning" are still genius to my ears. "I wonder if Barbara Streisand's house is a burning pile of ash? I hope it was her favorite. I wish I'd lit the fucking match!!" The DRILLER KILLERS were triumphant and anthemic, writing a song about fighting rednecks at the bar (where we had punk shows) with the line "The punks will always win!". Unfortunately, they never had any money either (possibly even less than the SPAWN SACS) and never got a very good recording. We're left with these ragged tapes (mine is literally taped together) that have been passed around the southern US for years, but at least we have something to remember them by. Long live the SPAWN SACS and DRILLER KILLERS! 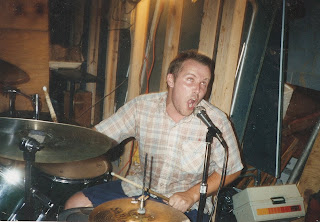 DRILLER KILLERS in that same basement in Dalton. 1997. photo by me. 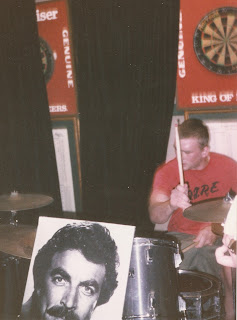 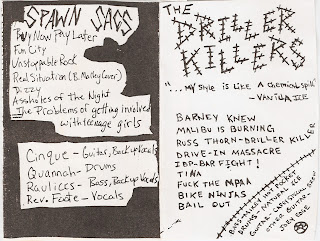 Wow - digging deep! I loved the shit out of this when it came out, DLing now to see how it holds up.

Classic Southeast punk @ it's best. Why doesn't that split CD ever come out with a proper release?

money issues, most likely. It's too bad.