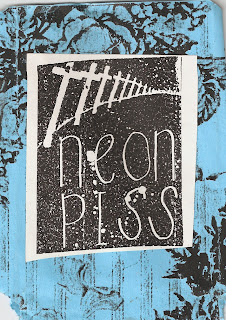 Kyle roadied a couple of times for my band and we would talk shit in the van about starting a band together when we got home. It didn't actually seem like it was gonna happen, but then one day, he called me and said we should practice soon. He had gotten our friend, Bryan to play bass and Bryan asked Barker to play guitar. Within a couple of months, we had played one show and recorded this demo in Berkeley. The place we recorded at was a warehouse where Lionel Trains manufactured the sounds of their model train sets. So, basically, we were playing these songs within a few feet of a whole lot of little trains. Also, Neil Young is one of the owners of the place...or something like that. The recording was mixed in a house that was littered with broken glass, overturned chairs and a lot of garbage.
We made around 400 copies of this tape total and they're sold out. We're not repressing them. A label in Germany made around 150 of them and those are sold out too.. So, now I'm putting it online, even though there's about 45 other places to download it. This is the direct recordings..not ripped from the tape.
We re-recorded some of these songs and recorded some new ones in Portland with our friend Stan Wright at Buzz or Howl on the fourth of July. It's going to come out as a 12" record in the fall of this year. Then, we'll probably go on tour.If you wanna know where we're gonna go, please be sure to check the NEON PISS blog in the future. 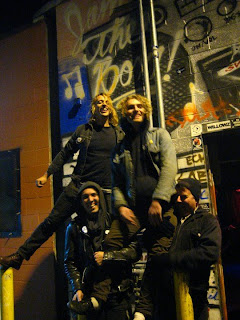 yo, sweet blog. I have a couple questions! Contact me at towerofswine@hotmail.com
-stevie d