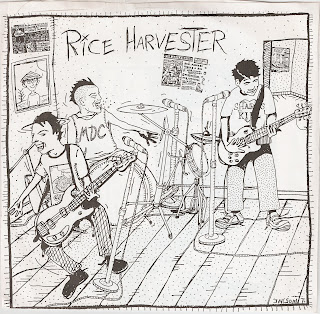 RICE HARVESTER was a zine. Then it was a band. Then, it was a zine again. Harry played guitar and sang. Ben played drums like a madman and did back up vocals. I played bass and yelled alot. We went on one cross-country tour in a Toyota hatchback that left us broke and insane. Here are the highlights/lowlights from that tour: 1. Playing in the desert outside of Las Vegas with Black Dice and having knives in our boots in case anyone attacked us...which we thought was a definite possibility. 2. Playing in San Pedro next to the giant cooked carcass of an entire pig. 3. Trying to sell cigarettes and the clothes off of our backs to the audience that hated us in Kalispell, MT since we didn't have any gas money to leave their town with. 4. Sharing a show with the great band, MIAMI at my first (of many) shows at Tire Beach in San Francisco 5. Driving from Montana to Denver to find out we didn't have a show...Then driving from Denver to Arkansas to find out we didn't have a show..then driving from Arkansas to Alabama to go home to no show in a town where even our friends didn't like us. I guess that's about it.
We had a really good time playing these songs and the two other fine young men in this band will always hold a special, mushy place in my hardened heart. I always thought no one liked us and I had about 50 copies of the 7" (out of a pressing of 300) sitting on my shelf for 10 years. When I took them on tour in 2008, they sold immediately and people told me they had been looking for it for years. Weird.
This tape includes all the songs from the 7" and two extra songs that were never released, including the absurdly embarrassing "Kiss The Butthole". The only things missing are our recorded version of a PUNKY ROCKIT song that has been lost to the ages somehow and the spoken passage from the 7"....which is just me reading a bit from Nick Blinko's "Primal Screamer" while Harry and Ben chant "Popus Adrianas" behind it and then played backwards. You didn't need that, did you? If you have a copy of that PUNKY ROCKIT recording though, please send it to me. I can't talk about this band anymore...If you want more info, check this blog. 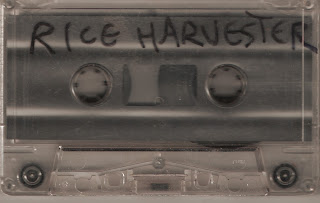 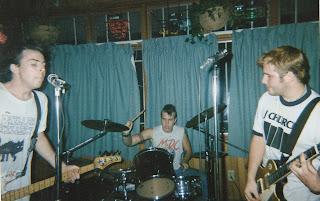 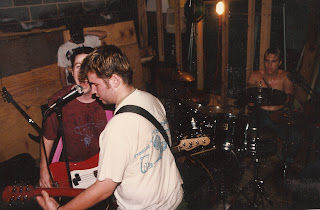 Hey man, just wanted to say thanks for puting all this stuff on your blog. I probably would have never heard this stuff otherwise. Seriously you guys had a great band here though, this tape has been playin on repeat in my van for days